"Looking for Love" by Paul Brown

This spring, Steamboat Magazine hosted our first-ever wildlife photo contest. Submissions ranged from back yard to backcountry sightings, and voting happened online at www.steamboatmagazine.com. Our partners, Jensen Photography and Home on the Range, offered great prizes for the audience-award-winning shots that are showcased here in Genuine Steamboat, along with some other stellar wildlife photo submissions and the great back stories behind the shots.

Elk
WILDLIFE CONTEST WINNER
"Looking for Love" by Paul Brown
Paul Brown photographed this image while calling and hunting for elk. He surprised the bull as he came out of a wallow and was heading back to his cows. “The elk survived
our encounter that day,” he says. 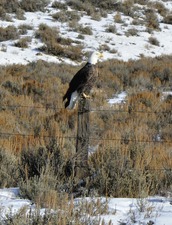 Bald eagle
2nd PLACE
By Rachael Fischer
Last winter, Rachael Fischer photographed this regal bald eagle along U.S. 40, about 15 miles south of Rabbit Ears Pass. She was en route to Steamboat when she spotted the eagle and its mate eating a roadkill deer on the side of the road. “One eagle flew away, but the other flew to a nearby fence post,” she says. “We were able to pull over, grab the camera, and take a few shots before it flew away also.” 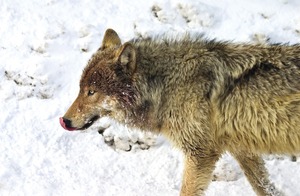 Wolf
3rd PLACE
“Winter Wolf in Yellowstone” by Sara O'Hara
Sara O’Hara photographed this close-up of a wolf in Yellowstone National Park during a weekend outing with a group of photography students and professors from Northwest College. She recalls getting the shot: “After hearing that a pack of wolves had taken down a larger animal that morning, we drove to the area they had been seen in hopes of spotting them. We ended up finding three wolves feasting on a bison, and shortly after we drove away from the scene, the wolves ran out of the trees onto the road in front of our car. Without thinking, I rolled down the window, stuck my head out, and began taking pictures. As this wolf was walking past our car, I was lucky enough to catch him licking his lips. I think it's safe to say that he enjoyed his lunch!” 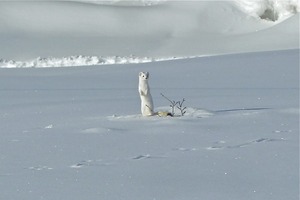 Ermine
“White on White” by Dave Brotherton
Dave Brotherton had seen this ermine several times on the ridge behind McDonald’s. He caught this shot while snowshoeing on a particularly cold winter day. “I really liked that it caught the sparkles in the snow,” he says. 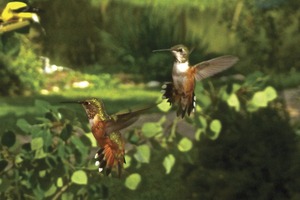 “Back yard Humming Birds” by Dave Brotherton
Dave Brotherton captured this pair of humming birds at his home near Clark. “Rose and I spend a lot of time with the birds,” he says. “We feed them, of course, and they like to have their pictures taken.” 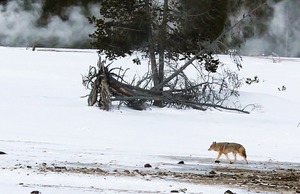 Coyote
By Chrys Marty
Chrys Marty photographed this coyote in March, near the sulphur pools at Yellowstone National Park. “He/She was was just strolling along in no particular rush,” she says. 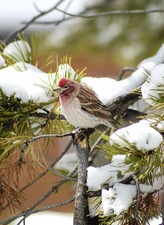 Cassin’s finch
“Cassin’s Finch Enjoying a Spring Day” by Jared Terrio
Jared Terrio caught this male Cassin’s finch hanging out after one of April’s snowstorms in his Steamboat back yard. “I had put out a bird feeder and didn't see a single bird for a week until I came home from work one day and found about 30 birds on my deck having a feeding frenzy. The food was completely gone in one day.” 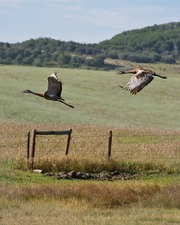 Greater sandhill cranes
“Sandhill Lift Off” by Daniel Hebard
Daniel Hebard lives near a nesting ground for the Greater sandhill cranes in the Elk River Valley. He shares his experience photographing one of the largest birds in North America: “Being migratory, they begin flying south in September for their winter homes and return annually in April as the winter snows leave the meadows around Elk Mountain, where we are entertained with their courtship rituals from a moderate distance. I am often able to capture an image with a mating pair standing on the ground while feeding or dancing in the spring.

“This crane pair spent late morning and early afternoon frequently feeding in this field adjacent to my horses’ corral throughout the spring and summer of 2013. Although timid and shy, they do not fear the horses who often feed in the pasture nearby. While creating this picture I was able to approach slowly, leading and standing behind a horse until they became wary of the horse and my presence and began walking away. Because I continued to apply pressure, continuing at a slow walk, they finally flushed as I captured a series of images of the cranes lifting off the meadow and headed in the direction of their nest by the Elk River. I was able to make a series of five shots on the wing which allowed a choice of several images. I wanted the picture to show both an open and closed wing view of these beautiful creatures on the wing, allowing both sides of the wings to be exposed.” 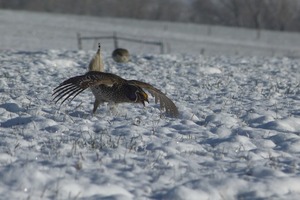 “Last spring, I was out cross country skiing at the back of our ranch when a flock of Columbian sharp-tailed grouse flew in and landed just in front of me. I remembered those words, ‘they come back to the same area for years.’ I started going out every morning before daylight, and sure enough, they were there every day in March, April, May and early June.

“One morning, Mike Middleton with Colorado Parks and Wildlife was there and he told me he had been watching this same lek for 20 years. Since then, I have taken over 1,000 pictures and movies. I went with Yampatika on a grouse tour in Hayden last year, just so I could appreciate what I have in my own back yard.” 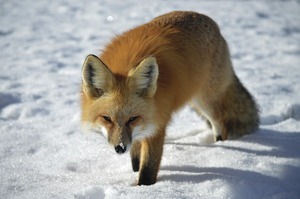 Red Fox
By Kelly Fender
Kelly Fender snapped this photo last winter in North Routt. She has been photographing this particular fox for a couple of seasons: “Throughout the years, she had pups and has grown,” she says. “She's actually quite a curious friendly character.” 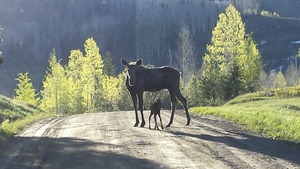 Moose
“Mama and Baby Moose on Mount Werner” by Peter VanDerWerf
Peter VanDerWerf captured this mother and baby moose at the Vagabond saddle while driving up to work at the Four Points Lodge construction site on the Steamboat Ski Area last summer. It was a Sunday morning and these two walked right in front of his truck. He also was able to get some video of the newborn moose calf stumbling on its new legs, as the mama nudged it back up with her long snout. “I don't think this baby moose is more than a few hours old,” he says. 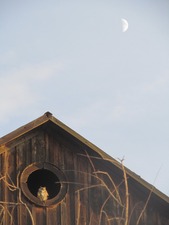 OWL
“Waiting for Night” by Josh Cook
Josh Cook captured this Great-horned owl last fall in a Dry Creek Park in Hayden. “I was taking my evening walk and noticed the owl. I returned the following evening and got the photo,” he says.