Books connect past and present. In this issue our suggested reads take you from the 100th anniversary of WWI, to a post-WWI generation’s increasing leisure that opened the way to summer homes in the Rocky Mountains, and finally to the burdens of 21st century’s stress with a remedy through mindfulness.

One hundred years ago, the “war to end all wars” began. One by one, 23 countries lined up in trenches to fight the Central Powers. The conflict ended with a newly-defined map of the world and more than 37 million casualties.

Acclaimed cartoon journalist Joe Sacco presents an unusual perspective on the war with his pictorial representation of one day, July 1, 1916, in one battle, on the River Somme in northern France. “The Great War’s” pages become a 24-foot-long black and white drawing printed on heavy-weight accordion-fold paper that is packaged in a deluxe hardcover slipcase. The intricate details of each page reveal the sequence of the day’s events.

The tiniest touches bring the drawings into focus: smiles on the faces of troops preparing for battle, cartons of ammunition being unloaded from trains, potatoes on plates at mealtime, gear shifts on trucks, shells loaded into 8-inch howitzers, faces of men on stretchers, hundreds upon hundreds of helmet-wearing soldiers in trenches behind stacked sandbags.

The accompanying essay by Adam Hochschild and Sacco’s original annotations to the drawing offer further explanation to the wordless illustration. The months-long preparation and week-long pre-battle bombardment proved useless in destroying machine gun emplacements and multiple belts of barbed wire in front of German trenches. At day’s end, more than 57,000 of the 120,000 British troops were dead or wounded. Notorious in history’s annals, the battle continued for months in spite of its recognized fruitlessness.

Sacco writes, “Like many others in the Great War, the battle went horribly wrong . . . All I could do was show what happened between the general and the grave, and hope that even after a hundred years the bad taste has not been washed from our mouths.” 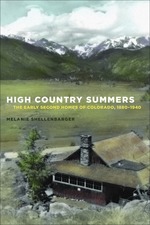 Melanie Shellenbarger is an architectural historian and faculty member in the College of Architecture and Planning at the University of Colorado, Denver. Her exploration of second homes on the Front Range of the Rocky Mountains addresses the time when railroads and automobiles opened the iconic “American West” to thousands of travelers. No longer limited to the wealthy and elite, the opportunity to enjoy leisure time created summer homeowners. Shellenbarger examines not only the architectural variety of homes built on Colorado’s Front Range, but also their cultural significance.

Second-home owners, as opposed to tourists, became part of a distinctive mountain community as well as the nation’s iconic landscape. She emphasizes the double meaning of “dwelling” as the home itself and the act of living within a landscape. Issues of class, race and gender arise in varying degrees within the “other lives” of individuals who, upon leaving their permanent homes and work environments, establish a place of their own without established restrictions and accepted norms. Shellenbarger argues that the summer homes became “metaphors for freedom, agency, and invention.”

Chapters about National Forests, Estes Park, Rocky Mountain National Park, and the African American recreation community, Lincoln Hills, reveal the lure of landscape that attracted individuals from all walks of American life. While the wealthier families “took their opulence with a mountain veneer,” others built small and somewhat primitive cabins reflecting a desire to enjoy the simplicity of living without modern conveniences. Their “environmentally sustainable” aspect has long been overlooked. Second homes served to reconcile the world of productive occupation that allowed for newfound leisure time with the desire for momentary escape. The idea certainly invites exploration and further thought. 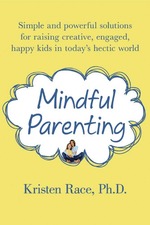 
Local author Kristen Race worked in public relations at the ski area before turning to a career in education in 1995. She turned her focus upon the impacts of stress in the learning process, and earned a doctorate in the process. When she and her family returned to Steamboat in 2007, she returned with her Mindful Life Schools curriculum, something that seven of the nine preschools in Routt County have been trained in, as well as faculties in both Steamboat Springs elementary schools.

Race’s new book follows suite. “Mindful Parenting,” is about developing the tools to cope with children’s and families’ difficulties. Mindfulness is defined as “paying attention to the present moment without judgment.” Race walks readers through the need to moderate responses to the unknown, the frightening, or the dangerous situation. Caught up in over-stimulation and over-scheduling, children’s emotional reactions override the “smart part” or rational part of the brain and disallow calm handling of the problems at hand. Her clear presentation for parents is parallel to what she teaches in schools all over the country: develop social and emotional skills for building resiliency to stress, thereby increasing readiness to learn.

Race offers a detailed introduction to the concept of mindfulness and a guide for creating a mindful family. Adults seeking guidance with specific issues can find descriptions of what happens in a child’s brain and suggestions for solutions pertinent to varying age groups. Readers will find step-by-step practice suggestions for themselves and their children, both using outside resources and self-help options. Specific activities and exercises create space, increase awareness, cultivate empathy and develop patience.

In a rapidly changing world, the family’s role in developing a “growth mind-set” becomes ever more critical. Race’s conclusions based upon brain science support her belief that “small changes can make a big difference.” This book’s pages point the way toward those changes.

Off the Beaten Path is Steamboat's local independent bookseller and their staff unilaterally loves to read. Check out the books that currently rank as the favorite staff picks: http://www.steamboatbooks.com/staff-picks-2014