Will Sandhills Save the White-Naped? Steamboat Springs, CO - In early March, the distinctive calls of the Greater sandhill crane echo across the Yampa Valley, trumpeting the arrival of spring and lifting the spirits of winter weary residents. Considered a species of special concern, the iconic cranes nest and raise their young in wetland areas then head north to summer breeding grounds.

Thousands of miles away and a world apart, Mongolia’s white-naped crane may just benefit from the plight of the Greater sandhill crane. A newly hatched conservation plan is forming a connection between the two that is both uncanny and inspiring, and could ensure both their survival.

Stemming from a chance meeting at the Yampa Valley Crane Festival in 2012, a collaborative effort between local U.S. Forest Service biologists, the International Crane Foundation and the Wildlife Science and Conservation Center of Mongolia is underway to protect white-naped cranes. 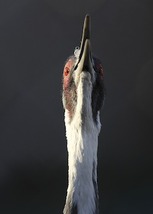 Listed a vulnerable species by conservationists, the white-naped crane is thought to be experiencing a rapid and ongoing population decline, possibly a result of the loss of wetlands to agriculture and economic development. Their numbers have dwindled to an estimated 5,500-6,500 birds in recent years.

“The idea is to do something now to address the decline, rather than waiting for it to get worse,” says wildlife biologist and avian program coordinator Robert Skorkowsky, who has worked on the Routt National Forest since 1992 and is especially enthusiastic about cranes. “It is not clear what is causing the population decline, whether it’s the stopover sites, breeding ground or the wintering ground, but something is going on.”

Skorkowsky was instrumental in starting this effort when he met and talked with George Archibald during the inaugural Yampa Valley Crane Festival last fall. Archibald is the founder of the International Crane Foundation and works with cranes around the world. Skorkowsky told Archibald about successful local conservation efforts for the Greater sandhill cranes, and the two began brainstorming for a way to collaborate. The Mongolian project was born.

Skorkowsky mirrors the Mongolian project with local efforts to protect Greater sandhill cranes in the Yampa Valley. International conservation experience will strengthen work his local team has had in place since the banding and tracking of Greater sandhill cranes began. The high elevation grasslands in Mongolia, Skorkowsky says, are similar in elevation and seasons to our part of the world. A majestic yet harsh landscape, Mongolia is a unique country with an extreme continental climate of brutally cold winters and hot, windy summers. Surrounded by high mountains and 250 sunny days a year, Mongolia is known as the country of Blue Sky, much like the clear, cloudless days and scenery we enjoy locally.

Eager to get started, Skorkowsky and Mongolian scientist Nyambayar Batbayar worked together to develop a proposal for the U.S. Forest Service International Programs, collaborating with the ICF on the project. Batbayar is the founder and director of the Wildlife Science and Conservation Center of Mongolia. After review, the Forest Service agreed to provide funding for radios and other costs associated with the crane capture, and will send two Forest Service representatives to assist with the project.

“The birds use the same stopover sites for generations and part of the conservation strategy is to find the staging grounds,” says Skorkowsky, explaining that this part of the study is already underway to monitor the birds, find their nests and see when they lay their eggs and know when the chicks are going to fledge (the stage in a young bird's life when the feathers and wing muscles are sufficiently developed for flight).

Though there are six species of cranes in Mongolia, the white-naped crane is the focus of the study. The 4-foot-tall, 12-pound birds have pinkish legs, grey and white striped neck, and a red face patch, and winter near Poyang Lake in China as well as in and near the demilitarized zone between North and South Korea.

“We developed a proposal to catch the young cranes and put backpacks on them with satellite telemetry so we can remotely determine the locations of staging grounds, stop-over sites and wintering areas so they can be protected and conserved.”

An exciting opportunity, Skorkowsky hopes to be a part of this capture team, which will work Aug. 9-25 in Mongolia, when the chicks are fully grown and can wear the ultralightweight harness with the radio. After scientists pinpoint where the birds are residing, the second aspect of the project will be to conduct a threat assessment of the breeding habitats and wintering grounds to complement the development of a conservation plan. Subsequent work will continue on wintering areas in China in 2014. According to the International Crane Foundation, critical habitat is also threatened by a proposed series of dams in the Amur River basin and the Three Gorges Dam in China.

“It’s tricky because it’s a huge geographical region where the birds live, from Russia to China, with a low population of people to observe them,” says Skorkowsky, adding that other species of cranes in Mongolia are more endangered and projects are underway to protect them as well.  “Maybe they are fine and have just moved elsewhere. We don’t know – that’s the idea of the radios. In Asian cultures, the species are important for many reasons, the people respect and welcome them each year. Our job is to help them survive.”

Kate Znamenacek is a freelance writer and photographer based in the Yampa Valley. She lives near summer stomping grounds for the local Greater sandhill cranes and is married to a wildlife officer.

Yampa Valley Crane Festival
The second annual Yampa Valley Crane Festival takes place Thursday-Monday, Sept. 5-9, 2013, in Steamboat Springs and Hayden. The festival kicks off with a screening of the film “Rocky Mountain Cranes” with filmmaker Michael G. Bennett. A crane art show at The Depot opens during First Friday Artwalk, then the weekend’s events include daily crane viewings, talks with wildlife biologists, art exhibits, workshops and family activities. If Robert Skorkowsky makes the journey to Mongolia, he will also present an update about the white-naped cranes. The festival winds up with a keynote speech by conservation photographer Michael Forsberg. All community activities and events are free. www.coloradocranes.org