“I chose images that were iconic, historic pieces that represent Perry-Mansfield's history and legacy, and that could be converted into art for silkscreen printing in the Andy Warhol tradition of hand-pulled, ink-based prints,” explains Walsh, a Perry-Mansfield board member and the project’s art director. 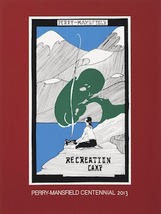 The four-color print titled “Imagine” captures the imaginative, free spirit of the camp, depicting a woman kneeling by a mountain lake. This piece was originally a woodcut created in 1920 by Charlotte Perry, one of the camp’s founders.

“Avatar” was initially a charcoal drawing by Perry. The black-and-white image of a horse and rider bounding through the wilderness harnesses the camp’s “enduring connection to nature, horses and jubilant, fearless human expression,” as the Copper Ridge Alliance describes it. 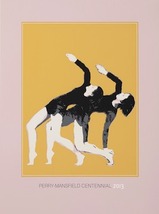 A third print, “Deco Danseuse,” takes its inspiration from a black -and-white photograph of two dynamic Perry-Mansfield dancers from the 1930s. The Copper Ridge artists meticulously transmuted this image – representing the camp’s embrace of what is innovative – into a five-color print.

Finally, “Heavenly Gray” plays with the vintage image of teacher and dancer Harriette Ann Gray, who first appeared in Perry-Mansfield programs in 1946. This five-color print memorializes what remains “an enduring symbol of the heart and soul” of the organization, according to the artists.

Approximately 57 prints were made of each design. Every print required the labor of multiple artists to overlay the complex layers of color. This resulting original artwork reveals the vibrant history and spirit of Perry-Mansfield and Steamboat’s enduring devotion to the arts.