An in tact kiva in Southeast Utah.

Photography and Story by Tim Stone

Utah’s Comb Wash and San Juan River Valley are filled with public lands, dramatic vistas, temperate weather, ancient ruins and amazing petroglyphs. All of it is seldom visited – and these are lesser known destinations that Steamboat Springs residents might consider moving to the top of their spring getaway lists. When mud season strikes the ‘Boat, warm days and cool nights are the daily forecast in the southeastern corner of Utah.

For its infrequent visitors, the BLM still maintains several trailheads near the most important ruins, with various sidetracks leading to other places. Speculation remains that ancient Anasazi sites are left to be discovered, since they could be hidden in the 50 or so canyons along Comb Ridge. The surrounding area is public land and free camping is permitted anywhere in the vicinity. It is illegal to disturb ruins and campers are reminded to leave no trace in this delicate desert environment.

The drive from Steamboat to Comb Ridge takes about six hours and takes travelers past Arches National Park, through Moab and near the Grand Staircase-Escalante National Monument. The region is so scenic, yet so under-explored, that we almost hesitate to share its secrets. 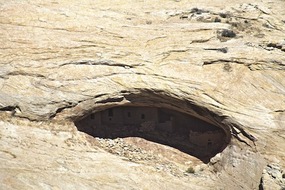 “Dubbed by some ‘the eagles nest,’ this ruin is very hard to find and even more difficult to access. It sits nearly 300 feet up a very steep slab that is unclimbable, and 100 feet down from the rim. To get this shot I had to negotiate some nearly-missing Moki steps from the top -- and even those are one tooth over on Comb Ridge, which is testament to how hard it is to find.” — Tim Stone 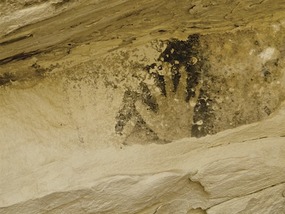 A well-preserved pictograph of a pair of hands: The carbon used by this artist has weathered well, compared to other pigments used in this area to create pictographs. 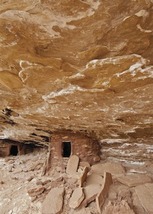 One of the hundreds of perfect granaries that can be found in the Comb Ridge/ Butler Wash area, many of them still sporting the handprints of the mason who laid the stones in the mud. Here, the door plug is sitting right next to the opening. These plugs were custom-fitted and affixed with mud grout to keep the rodents out of the corn supply. 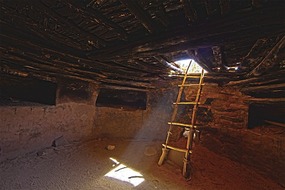 “This is the only intact kiva I have ever seen, let alone been inside. The original mud still coats the interior and the ceremonial niches and the firepit are still intact as well. The fire would be lit in the opening that can be seen just behind the ladder and the smoke would escape via a chimney on the the other side of this wall. We set out looking for this ruin and were not disappointed. It is a perfect example of the incredibly preserved ruins that can be found in the Comb Ridge area.” —Tim Stone

“The Wolfman panel is one of the most artistic sets of petroglyphs I have seen. The designs seems to have been done with a little more thought, detail and effort. Perhaps it is the reflection of one particular artist at the time? Unfortunately some of the work has been shot up or used for target practice in more recent times.” — Tim Stone 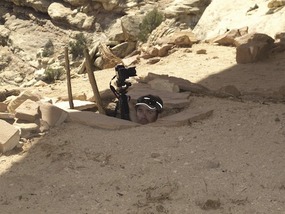 “I am carefully climbing out of the perfect kiva. You have to be extremely careful not to touch anything. While most kiva ruins look more like holes in the ground, the deep undercut at this ruin has preserved even corncobs that have been laying around for millenia.” — Tim Stone

Tim Stone is a local architect and photographer in Steamboat Springs. He can be found wandering in places like Butler Wash, Grand Gulch, or floating the Grand Canyon in mud season.