If you ask Jean Perry or Curtis Zabel what it means to have a retrospective show, they’ll both laugh and say: “Old!”

But they’re not old. They’re accomplished, Perry as a plein air painter and Zabel as a wildlife sculptor.

SAM hosts the Perry/Zabel retrospective from Friday, Dec. 21, through Saturday, April 13. The show represents the lifetime achievements of two award-winning artists and includes Yampa Valley works as well as those from other locales.

The French phrase en plein air refers to the act of painting outdoors. Because of changing outdoor conditions, the painter must be adept at selecting her subject, composing it, analyzing the light and working out the details.

I’ve had the privilege and irritation of painting with Perry. I’m only irritated because I’m not nearly as good as she is. She sees so quickly. I might be standing near her, quickly (in my mind) working on my composition and color palette. If I look over at her canvas, she has bolted past me with a beautiful, dramatic composition using the fewest of brush strokes and color. She paints with intention. Every brush stroke and every line of color are on the canvas for a reason.

“You mix the color, hold it up (against the object being painted) and see if it works. You may have to take it out. It’s like sculpting. There is a wonderful sense of movement and pushing the paint around. It’s very sensual. If you do it and look at it, it’s probably perfect. If you go back later, you may ruin it. Put the paint on and leave it.”

Why does Perry subject herself to long hikes to a painting spot when rain or wind may interfere? “Outside, you’re standing there witnessing things,” she explains. “The excitement comes out of your brain, down your arm and onto the canvas.”

She sums it up when she says, “It’s really just a kick in the pants to do it. Even if someone didn’t buy it, I’d still do it. Lucky us.” 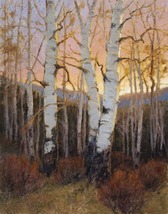 The two artists have been showing together for 30 years, since Zabel invited Perry to be in one of his shows. For that start she is still grateful.

Zabel is a warm, shy man, preferring raw nature and his studio to a crowd of adoring collectors. His exhibit will contain upwards of 50 pieces, including his first, an elk, cast in 1972.

Put that original piece next to a recent one, and it’s evident how much he has grown, not just as an artist but also in his understanding of the fastidious work that makes a sculpture great.

In his 40-year career, Zabel has sculpted 160 originals, with 3,000-4,000 being cast in limited edition series, as well as one-of-a-kind monumental sculptures like “Autumn Majesty,” the 17-foot bronze bull elk in Lincoln Park at the west entrance to town.

Raised on a farm, Zabel loves animals, especially horses. “If I’m working on the leg of a horse, I’ve felt them so much that I just think about how it should feel.” His understanding of animals comes from years of ranching and observing animals in their habitat. His sculpture’s names reflect that wisdom.

One of his favorites is “Beware.” A horse is hobbled. His ears are back and his nostrils are flared. He is saddled and ready to be ridden. Zabel explains the title: “If you get on me, I’ll throw you off.”

A new piece, “Hideaway” depicts a cowboy approaching a cow whose calf is hidden behind her in the bushes. You’d have to know ranching life to execute these pieces with such humor and drama.

You can be outside in the Yampa Valley and sense something akin to what an artist sees. But if the weather is bad, you can also look at a Jean Perry painting or a Curtis Zabel sculpture and feel that same connection.