50+ years At the Steamboat Ski Area The Steamboat Ski Area started in 1955 with one man’s dream. Rancher Jim Temple looked up at Storm Mountain, looming over the tiny town, and dreamt that one day it would become a ski area of international renown. Through tough financial times, drought and the early death of Steamboat’s favorite son, Buddy Werner, the ski area and the community around it has stood fast. Today, more than 50 years after Temple first opened Storm Mountain Ski Area, his vision has not only been realized, but surpassed.

1964 Hometown Olympian Buddy Werner dies in an avalanche in Switzerland 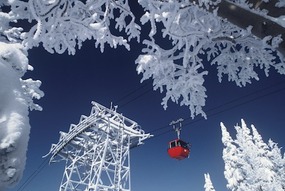 Stagecoach 6-passenger gondola built. 3,300 ft. span between Tower 1 (near Ptarmigan Inn) and Tower 2 (top of Christie) is world's longest. Height above Heavenly Daze between Towers 2 and 3 is 252 ft.

1989 Steamboat hosts two women’s downhill and giant slalom World Cups: one in February and the next in December

Typhoon, a gladed area between Cyclone and Tornado, developed