Steamboat Springs, CO - Last August more than 80 alumni, professors, staff and friends - some returning to Steamboat Springs for the first time in more than four decades – gathered for a weekend reunion honoring the 50th anniversary of Yampa Valley College. Those who toured the modern Colorado Mountain College campus were as bubbly as freshmen, tickled to find reminders of the good old days amid drastic renovations.

Inside Willet Hall, they stumbled upon the college’s original trapezoid classroom desks. Upstairs, Martha Lysle – a freshman at Yampa Valley College in 1968 – gently touched a door and exclaimed, “This was my dorm room!” In Bogue Hall, Bob Sides revisited the tiny space that was once his beloved campus radio station (and now serves as a storage closet).

Faces may have aged, but the enthusiasm and excitement for this college on the mountain have not. Yampa Valley College existed from 1962-1969, when Steamboat was just a cow town with the promise of a cool new ski area. There was one stop- light downtown and an A-frame at the ski area. The education was liberal, global and decidedly experimental, with a deliberate intermingling of living and learning throughout the campus and curriculum. Above all, this small, ingenious college was the academic seed for today’s prospering Colorado Mountain College.

During a reunion dinner at the Steamboat Grand Resort, chatter grew silent as George Tolles read the opening of Lucile Bogue’s book, “Miracle on the Mountain,” a history of the Yampa Valley College.

Bogue was the visionary. She would have turned 100 this year. She believed that Steamboat was the perfect setting for a small college to serve the surrounding mountain communities. She envisioned a private, four-year, co-ed, liberal arts school with an emphasis on broadening students’ world view.

Many doubted her. But as Bonnie Bogue, Lucile’s daughter, has said, those were just “fighting words to this daughter of Colorado pioneers.”

After a decade of tireless perseverance and some generous donations, Bogue’s Yampa Valley College finally emerged in 1962. The doors opened with 11 students, including three from Kenya, Argentina and Chile. The college continued to attract people from diverse backgrounds and cultures, building a cooperative international community of scholars from across the country and the globe. During the first four years, Yampa Valley College housed 23 students representing 15 foreign countries and 26 U.S. states. Saed Tayara from Syria stayed to become a citizen and mayor of Craig.

Alum Madeline ‘Ronni’ Connelly recalls arriving in Steamboat in 1965. “I sat on my suitcase in a field of dirt and said, ‘Oh my God, where have I landed?’” At the time, Steamboat’s population was 2,000. “It didn’t matter where in the world we had come from. We bonded together,” she says.

Connelly graduated in 1969 with a degree in international relations. She bought a house in Steamboat in 1971, then helped found the Steamboat Ski Area’s children’s ski school and the early ski program for people with disabilities. Although she now lives in Guam, she returns for one month each year to her home in Steamboat. “The valley became a part of my soul,” she admits.

A faculty with impressive credentials and a small setting made a world of difference.“The student-teacher ratio was very beneficial. It was almost like tutoring,” says Dr. Carroll Multz, a former professor with a doctorate in law and a bachelor’s degree in science. He taught biology, chemistry, genetics and human anatomy as well as various courses in economics and business. “The students weren’t afraid to ask questions.”

Two of Bogue’s (and the college’s) most faithful friends were George and Marian Tolles. They arrived in Steamboat having been foreign diplomats in Colombia. George, who taught international relations and world affairs, became a mentor to decades of students. His courses are remembered as among the most memorable on campus. “I remember the ‘War Games’ that combined the group dynamic class and Mr. Tolles’ foreign relations class,” says Peter Diltz, a student from 1965- 66. “We were given national and international roles and had to respond to changing events.”

With 103 new students enrolled in 1964, Yampa Valley College was voted into the Council for the Advancement of Small Colleges. Students traveled abroad to study and earned bachelor’s degrees in creative arts, humanities, social sciences, international studies and administrative studies.

Expanding in a small community

The college’s growth continually depended on the loyalty of the entire Steamboat community. Marian Tolles remembers Chikashi Nakahama from Japan staying in her home when he first arrived: “He was extremely shy and homesick and spoke little English. However he soon adapted, especially when his classmates learned he was a karate expert and could break bricks and boards with ease.” Later came Stanly Munga Githunguri from Kenya and Steen from Germany.

At the beginning, the campus was spread throughout town. A seven-room building at 11th Street and Lincoln Avenue housed the first classrooms. Dorms were small Old Town houses. As the college grew, churches and homes began opening their doors to students and classes. It created a strong family-like atmosphere.

“I couldn’t find a place to rent in those pre-resort days, so that year I slept on an 8-foot table in the back room of the Ski Haus ski shop by the Chief Theater. I bought a meal card for that old Ski Inn Restaurant ‘YVC cafeteria,’ and life seemed very good, and it sure was cheap,” says former student Ken Harrell, who arrived in 1964. “I had two classes that spring where I was the only student, when the entire college was in that old small building (that used to house) the Steamboat Pilot.”

In 1963, the same year the Steamboat Ski Area opened, Yampa Valley College purchased land on Woodchuck Hill as the site for a permanent campus. CMC’s Alpine Campus sits here today. The first permanent buildings, Monson and Willett halls, went up in 1966, followed by Lucile Bogue Hall the next year. The hexagonal brick structures were designed to represent a symbolic unification of learning with life. Students went to class, lived, slept, studied, ate and visited professors all under one roof.

Sides recalls the food in the cafeteria being “like resort food” for the first few years. But when the dining hall was closed, grub wasn’t easy to come by for college students living up on the hill. Felloalumni chuckled, remembering how entrepreneurial student Charlie Eckstrom spent $500 a week at Safeway and then sold prime rib and peanut butter and jelly sandwiches after hours.

Steamboat was quiet, small, rural and safe, but it was never dull. Alumni could barely contain their spirited memories of skiing every day, watching the Norwegian jumpers, Fish Creek Falls, the hot springs, the Gallery restaurant, Winter Carnival, movies at the Chief Theater, parties and summers studying abroad – above all, their lasting friendships.

Skiing and soccer were varsity sports. Beyond that, the college taught an array of outdoor activities including horseback riding, skiing, swimming, fishing, tennis, mountain climbing and ice skating. Tom Kann worked his way through college by teaching skiing alongside local Olympian Skeeter Werner.

Like any collegiate institution, it had a newspaper and a yearbook.

It also had a radio station. Sides arrived from Los Angeles in the fall of 1966 and immediately fired up a pirate radio station for his fellow students. It was called KYVC AM 840. “At two watts – not exactly legal – we got that sucker to cover an entire mile!” Sides says. After his years at Yampa Valley College, he went on to earn his bachelor’s and master’s degrees in telecommunications and eventually started his own business called Broadcast Media Services.A college that wouldn’t die.

“We don’t mention USIU. That’s bad juju,” says Eckstrom, when the conversation turns to Yampa Valley College’s ill-fated turnover. His fellow proud alumni just call it “the tragedy.” United States International University bought Yampa Valley College in 1970. While some thought it would be a wise decision for the financially strapped college to be managed by such a large institution, this did not prove true. Students and professors began leaving, and the campus was sold to real estate developers. “It continued for two or so years,” says Gerald Rudolph, who taught history and English and served as the director of academic affairs from 1964-69. “But they never did what they said they would.” Steamboat almost lost its college forever.

By 1975, the college was dead – but the dream was not. As Tolles sums it up, “They left behind a lot of ill will and a college in limbo.”

But Bill Hill prophetically called it “the college too tough to die.” With the creation of the Yampa Valley Foundation in 1979, Hill’s dedication, the Tolles’ undying support and a generous $60,000 donation from Bob Adams, the college resurrected in three rundown buildings. In 1981, Colorado Mountain College agreed to establish its Alpine Campus in Steamboat as a full-service community college. New director George Bagwell then spearheaded a much-needed renovation and expansion of the campus facilities.

Now CMC finds itself at a moment of great expansion. The dirt on Woodchuck Hill started moving again in June 2011. Monson Hall – soon to be followed by the other two buildings – was demolished as a part of the construction of a ne$23 million academic center. Although the Yampa Valley College alumni were sad to see the awkward hexagon buildings demolished, there was no shortage of enthusiasm for the expansion. Not only are the facilities growing, but so are the academics, with four-year degrees now offered. “Things that don’t grow, die,” says Alexander “Paul” Hands, a student from 1965-67. Today, Hands lives on a ranch in Strawberry Park but says he would have happily traveled across the country for a Yampa Valley College reunion.

“If it wasn’t for Lucy Bogue and her dream, my life would have been different,” he reflects.

Eckstrom, class of 1968, was the reunion’s chief organizer. He corresponded in over 2,500 emails with former students and faculty scattered all over the world. “The college made a lasting impression on me, and I will always be grateful for the education I received during a very tumultuous time...both for our country and me,” Eckstrom says. “It was a wonderful place for young people to get away and come discover themselves.”

CMC now enrolls an average of 1,500 students each semester, 750 of whom are seeking degrees. The college averages 15 international students each year. Willy Markowitz, who attended the college from 1963-1968, still lives in Steamboat and remains active along with George Tolles on a committee called Friends of the College, which seeks to keep the college and its students in a positive light in the community.

Yampa Valley College alumni remained stunned by the positive growth of their little college and encouraged by the future possibilities. “I’m impressed,” says Multz, the former professor. “To be able to do what we did at the very beginning was like the miracle of five loaves and two fish. But this is heartening – it was worth all the hard work. It makes you swell with pride.”

Bonnie Bogue thinks her mom would agree: “Lucy would be thrilled at the groundbreaking for the new college building. Her family will mourn the demolition of Lucy Bogue Hall – but Lucy herself would not. She wasn’t all that fond of the building design, anyway! And her vision was always about the future. Nothing fits her vision more than for all of you to be here, living proof that she was right – Steamboat is just the right place for a college.” 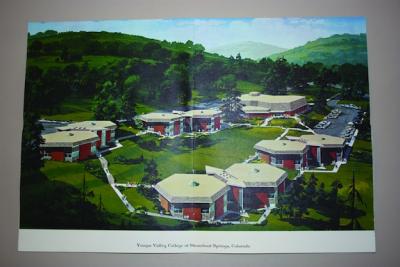