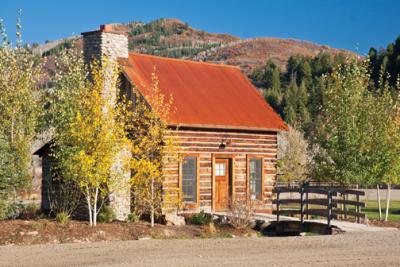 Steamboat Springs, CO - Almost everyone who walks through the door of Mystic Cabin at Sweetwood Cattle Company says they could live in the small space, notes sales manager Rebecca Fix. “Especially guys.”

Sure enough, a few minutes later photographer Corey Kopischke comes into the cabin to set up for the photo shoot. “This is nice,” he says. “I could live here…” The old post office was moved to the ranch by previous owners. It’s dubbed the Mystic Cabin after a long-forgotten homestead and postal route.

Other remnants, from bridges to cabins, are scattered around Routt County ranches. The cabin was in poor shape when Sweetwood Cattle Company owners Ryan and Beth Wood bought the property. They wanted to honor the heritage of the 600-squarefoot building by making it the centerpiece of the ranch headquarters and the first thing you see after you cross over the Elk River on to the property.

Original beams, reclaimed barn wood and old planking remain. Rock and wood from around the ranch, along with details like an old latch, rope, skins and tin-ware not only enhance the Western look, but also reflect the taste of the owners, who took a personal hand in restoring the cabin.

The updated galley-style kitchen features barn wood shelves, rough-hewn countertops and a braided rug that convey an old-fashioned feel. Modern conveniences are camouflaged: the refrigerator has a ‘50s retro exterior, and a convection oven rolls out from a drawer.

One way that designer Kim Romick of Into the West made the most of the small space was to utilize corners. Triangular shelving is tucked into the living area, while a sink fits neatly into the bathroom corner. A large, leather couch sits at an angle in the living room, providing the main seating space. “Don’t have fear of big furniture. Tiny spaces don’t need tiny furniture.

Pick a nice size sofa and another signature piece,” says Monique Payne of Into The West. “But don’t overdo it. In a small space you don’t want a lot of clutter around.” Flooring is important, Payne says. “Rugs can define an area, they can really make a difference.”

Guests who stay in the Mystic Cabin spend the night tucked into a custom-built bed made by local craftsman Rod Williams on a loft overlooking the living area. Although the sleeping area is small, visitors enjoy king sized comfort. The cabin is reserved only for “lucky family and friends,” Fix says. Sorry, Corey. 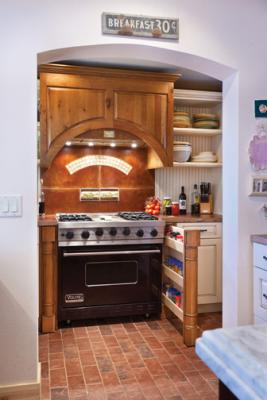 A spice rack is tucked away in the cooking nook.  Photo by Corey Kopischke.

Ellen Ladley took on the downsizing challenge several years ago when she purchased an 1,800 square-foot, 1950s bungalow in Old Town, gutted it and made it work for her family of three. Ellen’s kitchen is an example of bigger not always being better. The small kitchen is loaded with knotty cherry and maple cabinetry with plenty of drawers and an added kitchen nook “that broke every kitchen design law,” Ellen says with a grin, making the kitchen warm and whimsical.

She created a kitchen workspace where once a back porch had stood. “That’s where I spend most of my time,” she says. “You use every inch,” the cabinetry designer says. “I have cabinetry all over the place, under the stairs, in most every nook and cranny, I even have it retrofitted into cantilever spaces. I didn’t want to add to the footprint.”

Utilizing outdoor spaces is another strategy for expanding space. “I have five sets of French doors on the first level. I can open the inside to the outside and expand my living spaces that way. Definitely use your outside spaces.” An added bonus of the French doors is the light they provide. “I didn’t want to live in a dark hole,” says Ellen. “So the doors are great and I also added windows everywhere.”

Another type of light source that works great for small spaces, especially rooms with no windows, like powder rooms and closets, are light tubes, which are cut into the roof and extended down into the room. “I have tubes in my upstairs baths,” says Ellen. “They light up the spaces and changed the whole feel of the rooms.”

Living in a small space is wonderful, says Ellen. “I find my family utilizing our spaces better than people in huge homes. You just need to look for spaces that you can use to add fuctionality. That’s what makes a home great.”