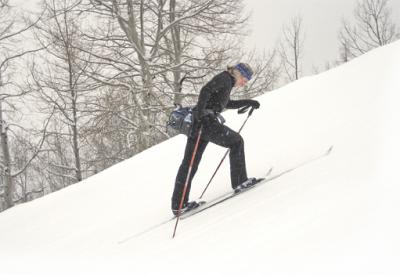 Caroline Lalive skins her way up the mountain.  Photo by Nelson Carmichael.

Steamboat Springs, CO - The word is out, not everyone rides the chair lift. We’ve all seen people plodding their way up the mountain, defying gravity. Most people still embrace the luxury of the lift, enjoying the time to rest, catch their breath and recover before another heart-pounding run through the powder. But the norm is changing and a growing number of locals know there is something magical about “earning your turns.” This fast growing sport known as skinning involves strapping a pair of carpet-like pieces of cloth to the bottom of your skis. So named because early skiers used straps of animal fur to achieve the same effect, skins maximize traction on uphill slopes. In a community of avid outdoor people, skinning is one more way to get the blood pumping. My first taste of this lactic acid fiesta was a few years ago. I had been sidelined from World Cup skiing with a knee injury. Frustrated with my lack of activity and hoping to get out and enjoy the winter beauty, I gave skins a try. I haven’t stopped since then. One of the best aspects of this aerobic test is the variety of equipment that can be used. In a world where expense is often the limiting factor, skinning is a flexible option that doesn’t have to break the bank. The only initial investment is the actual skins themselves. From randonée skis to split boards, the method is the same: Place those sticky Velcro-like strips on the bottom and climb away. Personally, I use my backcountry cross-country skis. I cut down a pair of skins to fit. Tele and alpine skis can also be used. From entry-level trails on Emerald Mountain to the impressive Houte Route in Chamonix, France, the excitement remains the same. You’re out there doing it. Living it. Pure and simple. There are no lift lines to be endured, no electrical power to be consumed. Just the burning in your lungs and the thrill of another day in paradise. 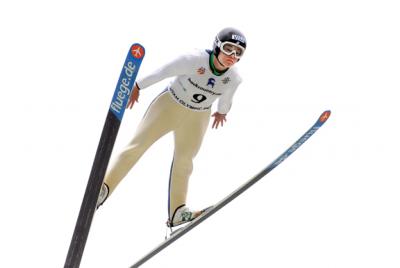 The 2014 Winter Olympics in Sochi, Russia, will mark the first time in history that women ski jumpers will be included in the Games. Last June, the International Olympic Committee voted to include the sport on the official list of participating events. “For our sport, this means a huge step in the right direction. Women’s ski jumping has been developing a lot over the past 10 years, but the Olympics is what our sport really needed to take the next step. I’ve dedicated my life, hopes and dreams to ski jumping and I’m thrilled that our sport will be showcased at the 2014 Olympic Winter Games in Sochi,” says 2009 World Champion Lindsey Van of Park City, Utah. Women jumpers have long been accepted within the sport itself, says Todd Wilson, Nordic coach of the Steamboat Springs Winter Sports Club. “We’ve always had a program for women and strongly encouraged their involvement. Even the FIS (International Ski Federation) had a women’s jumping category for almost a decade. The difficulty was, there wasn’t an avenue for them to pursue their Olympic dream. With this approval, there is an even bigger opportunity for our local ladies.” Receiving the Olympic nod gives boosted credibility for the entire Steamboat jumping program. With a top-of-the-line facility including a plastic surface for summer training, SSWSC is ready to make its mark. Rick DeVos, executive director of SSWSC admires the gains. “We’re proud of our ladies’ special jumping program. We support and encourage their athleticism and tenacity,” DeVos says. Almost a quarter of the athletes in SSWSC’s Nordic program are female. Local jumper Madison Keeffe has set her sights on Sochi. At the age of 16, she may be a long shot for the Games, but she’s thrilled with the thought of competing. “I’m excited for the Olympics, it gives me something to look forward to. It gives all of us girls hope for the future.” 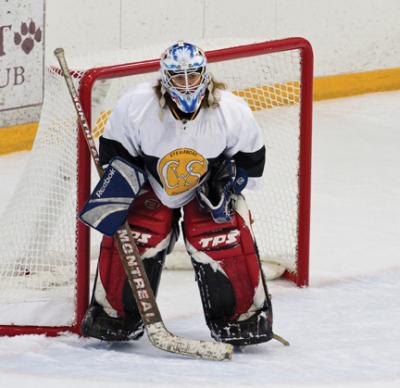 Nikki Knoebel of Chix With Stix.  Photo by David Dietrich.

Not many towns with fewer than 15,000 people boast three women’s hockey teams that play in the state leagues, but Steamboat Springs does. The veteran A league team, Chix With Stix, shares the ice with Steamboat Storm and the Bobcats, which both play in the Mountain Division of the Women’s Association of Colorado Hockey. The Chix were the first local women to take the ice, coming together in 1991. After 14 years in the WACH’s A division, the Chix moved to the B1 division in 2005, winning the state championship in 2009/10, and then moving back to A. “We enjoy the challenge,” says Chix team captain Cathy Wiedemer. “In A2 we play at a higher level and face talented teams.” One highlight came late last season, when the Chix beat the University of Wyoming, 5-0 and 9-1. “We hold our own against the collegiate teams. I think many times we surprise our younger opponents,” Wiedemer jokes. Team members’ ages vary from 20 through 50- plus. It’s a diverse bunch, including figure skaters, former collegiate hockey players and women who are not afraid to sweat. “Hockey’s the common denominator,” Wiedemer says. The players are quick to thank and credit their coaches and support crews, which include spouses, significant others and kids. “Our team spirit extends well beyond those of us on the ice,” Wiedemer says. “It’s become a family affair for everyone involved.” Patty Chovan, 14-year member of the Steamboat Storm, sums up her experience. “What I love about playing hockey is that it’s a great group of athletic, competitive women. We have so much fun laughing together. The friendships I have made on this team will be lifelong.” The local ladies set a precedent for the girls of Steamboat. Last spring, the girls U19 hockey team took the state championship – for the second year in a row. Under the leadership of Coach Kent Foster, the team finished the season 28-3. The women – and girls – of Steamboat post some serious net gains.