I was so nervous today. I had no clue where anything was or what my auditions would be like. Also, I was number seven, one of the first people to go -- YIKES! The monologue I chose was “Goldie” and my song was “Our Last Summer,” from Mamma Mia. But I started thinking … What if when I start my monologue, they grow devil horns and a tail, saying I couldn’t do that skit? But they were nice and cheerful and laughed and thought I did great. I felt so relieved.

But I didn’t get to sing my whole song, even though I totally memorized it. After a minute or so they told me to stop. Maybe they had to fit everyone in. It was also the first time I sang it with someone playing the piano. They played it pretty high, so I didn’t sound that good. But at least I remembered it. My friend, Maddy, forgot hers, and sang “Happy Birthday” instead.

Today we found out howe did and what classes we got. I was excited and nervous (“nervcited”). You go to different booths to see what you got. Everyone has to take acting, singing and dancing. Afterward we zoomed to a building to work on a dance for the Fourth of July parade. They taught it step-by-step, so we could get it perfect. So far my two days here have been FANTASTIC!

As confusing as I thought today would be, it was way simpler than I thought. I had acting ensemble and everyone was bubbly and nice. Next I raced to modern dance, which felt like a stretch class. Then I went to creative drama, where we played a game passing sentences to create a random story.  When it was my turn I said, “Then they buy purple monkeys with yellow and orange afros.” Then we had lunch (the chef is amazing), which was scrumptious chili and salad. Then we got an hour of free time and did a comedy show. FUN! Songwriting was the most fun ever. We came up with “Magic at My Fingertips” and “Stars All Above Me.” My last period was tap. They didn’t give us tap shoes, so I just used my jazz ones. It was just like walking on drums. We made a fun dance and cool music at the same time. Today I also met some of the overnight campers, who came from all over the country just to be here. I love Perry-Mansfield so far!

Today was great because I knew where everything was. In acting ensemble, we went through a play using every single part. It was a blast! In modern dance we made up a graceful dance that looked awesome. I zipped my way over to acting and we played games using props and our imagination and noticing skills. Next I zoomed to my favorite place: LUNCH! It was amazing salad with freshly cooked chicken. In song writing we kept working on “Magic at My Fingertips.” It was so cool. I love songwriting. There is always such a happy spirit in that class. After that I went to my last class, improv - dancing in your own unique way, which I love! 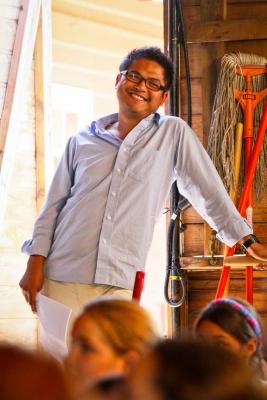 Today was the most fun day yet. I made a new friend  Hunter, who is from somewhere near Telluride. I also saw a girl named Fiona, who fell off her bunk and had a swollen face and had to go to the hospital. There was also a girl named Mimi who had to spend the night at the hospital because she had a bad stomachache. I thought today we had an amazing lunch. It was gyros with really good beef and everything.

These days were great. I kept working on our “Save the World” song and we also had a fire drill. Everything was so fun, entertaining and exciting and I am so happy. On Friday we worked on a new song  “Don’t Say Goodbye,” and the whole day was calm and easy.

Week Two, How Are You?

Last night was the Fourth of July, and everyone was TIRED! It was great to dance on main street in front of everyone. Hundreds of us danced around, with a high school guy in a leotard leading us in a pop song. After a yummy lunch of macaroni and cheese, I went to acting class, where we got parts for a play. I was a citizen and a guard.

Today started out perfectly. People weren’t as tired as yesterday. That made our day much bubblier. In songwriting we first had a sad song, but we changed it and we all got to write a verse. In improv we warmed up by pretending to sculpt people, and then we did mirroring, which was super fun. For lunch we had perfectly seasoned chicken with potatoes. I love our cooks.

In acting we went through our play and nailed it. In creative drama our teacher, Tom, taught us how to edit our own acting. Then we had a delicious lunch of bagel melts (trust me, I loved it!). Every time Hunter and I saw a high school guy performing, we complimented him because he always had cool accessories like pink, orange and blue headbands and pink shades and cool rings. So we’d say, “I like your---- blank,” and he’d say, “I like your choker, it’s sassy.”

I wish Perry-Mansfield wasn’t over. I had soooo much fun. On the bright side it was an amazing day. We did our play in front of the staff and they thought it was hilarious. In modern we did this thing where you lay down and have 10 counts to get up. You had to make a shape until you were standing up as tall as you can. We also did great in creative drama.  In songwriting we finished our song and got yummy popcorn. Hunter, Christina and I all made a rap song called “Butterflies and Gummy Bears.” Then guess what? Lightning struck the building and the electricity went out and there were sparks. It was a huge storm. Go Perry-Mansfield! 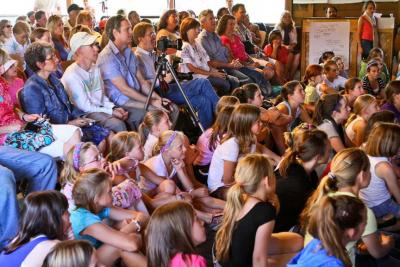 The audience watches the students preform. Photo by Corey Kopischke

I thought we had a perfect performance ... no one was nervous and no one messed up. I bet our parents were surprised at how much we learned and howell we did. My modern dance class was the first to go so I got really nervous with butterflies, plus I got the giggles. But I got over it. In my very first dance class I had the same nervous giggles, but now the whole time I danced I had a HUGE grin on my face.

We also did two plays. One was a skit where I pretended to be a girly girl like from California. The other was called The Trolls and the Pussy Cat about a bear and a hunter and some trolls. One of my lines was, “Madam Mayor, what are you going to do about the trolls?” Everyone in the crowd cracked up, which made me almost laugh also. Luckily I didn’t.

I loved my experience and definitely improved my performing arts skills  After the show, we had to give everybody hugs and say good-bye, which was sad. But I made super good friends with Hunter from Ouray. I love Perry-Mansfield! ™