The home of Wrenn and Mary Blalock at Marabou Ranch

Steamboat Springs, CO - A SIX-POINT BULL ELK LOOKS UP in curiosity at the car passing through Marabou Ranch. Distracted, it steps aside at the last minute as horses rush it, attempting to drive the wild animal from their hay. Meanwhile, the ranch manager is out grooming 20K of corduroy tracks for cross country skiers, startling a flock of birds from their midday rest.

On a still winter’s day, Marabou provides a pastoral counterpoint to the hustle-and-bustle of the Steamboat Ski Area, only eight miles to the east.

Overlooking this idyllic western scene is the home of Wrenn and Mary Blalock. If you saWrenn walking down Lincoln Avenue, you might mistake him for a long-time local. In jeans, hiking boots, long-sleeve T and baseball cap, this second-home owner has embraced the Steamboat Springs lifestyle, and his home here reflects his love for the area.

The Blalocks worked with Brooks Design-Build and Hamilton Construction of Steamboat, plus Georgia designer Jane Coslick, to create a home that resembles the architecture of Marabou’s owners’ cabins and lodge. The result blends traditional Western elements with Americana accents, eclectic conversation pieces and the ultimate focal point: floor-to-ceiling windows that perfectly frame a jaw-dropping vieof Sleeping Giant mountain, with the Elk River valley in the foreground. 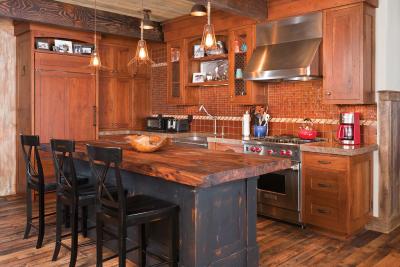 The Sleeping Giant provides the backdrop for the living area; the fireplace mantle is made of trestle wood from an old Salt Lake City rail line. Photography By Corey Kopischke

“I do views,” Coslick says. “Wrenn and Mary’s house isn’t that big, but all the spaces move your eyes toward the view.” Huge decks overlook the valley, with plenty of room for the BBQ, beach chairs and Wrenn’s newest acquisition — a hot tub just outside the master bedroom.

From Tybee Island, near Savannah, Ga., the Blalocks wanted a mountain home that distinctly reflected its ranch setting, rather than their Southern heritage. Still, the house exudes a sense of graciousness and hospitality that bespeaks their style.

With granite countertops and a large work area, the kitchen is designed to be used — and Mary does. She cooks for the ranch hands, contractors, friends and neighbors. “We’re all like her family,” says Marabou’s Scott Bell. “And she is an excellent cook.”

Wood — dark, natural and in many cases, reclaimed — is predominant throughout the 4,200-square-foot home. 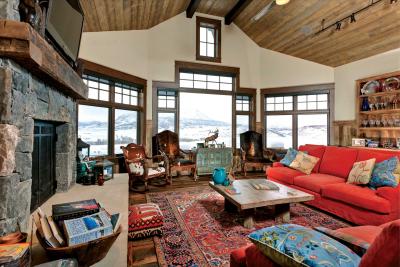 The kitchen island’s top is made from Mexican oak reclaimed from the Cochise National Monument. Photography By Corey Kopischke

Perhaps the most noteworthy woodwork is on the kitchen island and in the powder room. They feature Mexican oak that has been reclaimed from the Cochise National Monument. The wainscot in the living room is rescued elm. Once commonplace, elm trees are noscarce, due to the outbreak of Dutch elm disease that devastated their population in the 20th century. “Elm has been increasingly difficult to find in recent years,” Hamilton says. The mantelpiece is made from trestle wood from an old Salt Lake City rail line. Hamilton and his creactually made their own plank siding for the exterior from dead, standing timber. “I wanted a log home,” Wrenn says, “but I wanted it insulated like a real house.”

Wrenn and Mary have two daughters, Mary Anne and Palmer, and a 22-year-old son, Edward, who is confined to a wheelchair. His ability to move around the house was the driving factor behind the decision to build all of the main living area, from the entryway to the balcony, on one level. “He’s a special young man,” says Coslick.  “He could never walk, but he can water ski and snoski.”

Wrenn appreciates the fact that Marabou’s amenities buildings are right down the hill from the Blalocks’ home. His son goes for massages and physical therapy while Wrenn gets in a workout in the exercise room. Mary’s preference is riding horses throughout the 1,717-acre ranch.

“They’re a great family,” Coslick says. “And the perfect client. They told me, ‘Just come in and get it done.’”

“One of the neatest things is that the Blalocks were open-minded enough to do things different,” Hamilton says. He chuckles when he remembers the day the furnishings Coslick selected arrived by truck. No one was sure what to think when bright red appliances, turquoise chandeliers and a Victorian red door with art-deco-era etched glass were unloaded from the truck.

“They were snickering and making fun of it,” Coslick recalls. But within 24 hours, Coslick’s plan started coming together. “It’s still Colorado, but it’s got what I call a ‘happiness edge’ to it.”

One of the most cheerful rooms is over the garage. It showcases lipstick red Elmira Stoveworks 1950s retro appliances with state-of-the-art features. Plank flooring, leather kitchen chairs, blue cabinets, steer horns and cowboy art come together to create relaxing quarters that alloguests to be self-sufficient.

Another remarkable room is Mary’s bathroom, where white marble stands in stark contrast to the dark wood elsewhere in the house. Hamilton says it adds a little “beach feel” to the house.

“I was a blessed girl” to be chosen to design the Blalocks’ house, Coslick says. She went on “hunting expeditions” to find one-of-a-kind pieces, scoured antique shops and attended auctions.

Coslick also relied on local merchants like Romick’s Into the West, where she found Western furniture and furnishings, David Chase Rugs & Furniture, secondhand stores and Light Works of Steamboat, where she met Nancy. “In all my years in design, I’ve never met as wonderful, knowledgeable, fine person to work with,” she says. “I think the resources of the town are amazing.”

If Steamboat is remarkable, Marabou Ranch is a delightful surprise. When plans were announced to turn rolling wheat fields into a “refined ranching community of 62 exclusive homesites,” those more attuned to traditional mountain development were taken aback.

“Working ranch” and “luxury homes” aren’t phrases that usually go together, but Marabou blends the two seamlessly. The ranch is one man’s dream. “Jeff Temple was the visionary,” says Marabou’s Scott Bell. Temple is a fourth-generation local, whose father helped to start the Steamboat Ski Area.

Winner of the Steamboat Springs Sustainable Business of the Year Award in 2007, Marabou has been recognized for its “smart development,” from riverfront reclamation to green building resources.

Owners enjoy not only luxurious spa and workout facilities, a private theater and luxurious lodge, but also unique amenities like a quarter-side of Marabou beef, miles of mountain bike/cross country ski trails, a tubing hill and “master guides” from Olympians to fly-fishers who teach guests the local ropes.

Like the Blalocks’ home, Marabou itself is both a casual country ranch and a refined retreat. 12:00am · Downtown Steamboat Springs
View All Add Your Event