Coming home, for the Taylor family, is more than pulling into a garage and retreating to privacy. They could have had that anywhere.  Home for the Taylors is defined in the heart of their community, in dwellings that welcome hospitality as much as peace and comfort. They created that feel in their primary residence in historic Midtown Atlanta and noin their newly renovated home in downtown Steamboat Springs 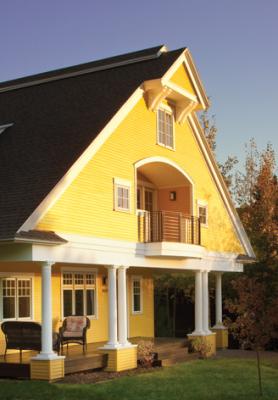 Tucked among mature trees and Fourth Street’s quiet demeanor, the Taylors’ buttercup yellow home is a show-stopper with a steep gabled roof bolstered by classic white columns along a comfortable covered porch. It melds with its Old Town surroundings while subtle touches – a pleasant balcony with arched opening and curved steel railing – lend a hue of modernity to the cheery abode.

Freshness drapes the home, yet traces of its origins remain apparent.

Finding home away from home

The Taylors built a home to nurture and inspire the exciting opportunities that brought them here. Up until five years ago, the family of four – Michèle, Kenneth, daughter Zoë and son Zach – had never even been to Steamboat.

Avid skiers, they spent most of their time on the slopes of Vail and Lake Tahoe. But in spring 2007, while skiing at Vail, 12-year-old Zoë caught the eye of Ken Recker, then coach of the Steamboat Springs Winter Sports Club’s telemark program. Intrigued, the Taylors took Recker’s suggestion that she compete in the U.S. Telemark National Championships in Steamboat later that spring. Zoë did well and reveled in the experience.

The thrill of racing stuck. In 2008 Michèle arranged for herself and Zoë to spend the winter in Steamboat to explore Zoë’s potential with the Winter Sports Club.

The decision was a whirlwind. Except for visits, Kenneth and Zach would remain in Atlanta. Zoë would have to change schools, and Michèle knelittle about Steamboat or being a “ski mom.”

Following a successful first racing season, Zoë was invited to become a member of the U.S. Telemark development team. She was also thriving academically at Steamboat Springs Middle School, where the atmosphere was both encouraging and accommodating of Winter Sports Club athletes. Pieces were falling into place. It was time to make Steamboat home.

“We could only do this in Steamboat, not any other place,” Michèle says. Describing herself as an “in-the-middle-of-things kind of person,” she set her sights on Old Town, within walking distance of Howelsen Hill, schools and downtown shops and events. The Taylors planned to spend more time in Steamboat throughout the year and wanted a comfortable atmosphere for their family and guests as well as a caretaker in their absence.

They purchased a simple single-level home in a tight-knit neighborhood where the family had already made good friends. Built in 1950, the 1,000-sqare-foot home had outlived its original purpose in both size and function.

“Hospitality and being able to welcome people into our home is incredibly important to everyone in our family,” Michèle says.  Neighbors and good friends Randy and Paula Salky introduced the Taylors to designer Jeff Gerber, who had already re-designed and overhauled one of the five other similar-style homes built during the same era along Fourth Street.

Gerber and business partner Hans Berend are a design-build team. They share a penchant for designs integrating clients’ needs and tastes with green building elements and the surroundings. Streamlined communication and planning, in addition to the team’s skill, professionalism and familiarity with the neighborhood, smoothed what might have been a daunting endeavor. 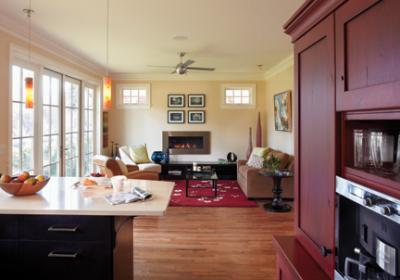 “Both Jeff and Hans have a tremendous amount of integrity,” Michèle says. “I knew they were doing quality work and that they were including me when I needed to be included but not in every detail.”

“I also found comfort in the fact that they are neighbors … They recognize they are part of a greater community and have a responsibility to that.”

The Taylors sought to conserve as much of the original structure as possible but also needed to triple the living space. To accomplish this, Gerber and Berend augmented the existing foundation and exterior walls to carry the load of a new second floor. The process also provided nine-foot ceilings, adding volume to the main floor and lending an open feel to the compact floor plan.

The Taylors willingly gave up the undersized garage (a carport was added to the opposite end of the home) to allow for a den/ guest room on the main floor. Ample windows and glass doors line a spacious kitchen/lounge area on the main floor and master bedroom and bath on the second floor, taking advantage of morning sunlight and bright, pleasing views of Mount Werner.

Keeping with their clients’ conservation goals, Gerber-Berend incorporated newer windows from the original structure into the renovation. Constructed of pre-manufactured trusses, the steep roof adheres to Old Town character while providing the family airy, private spaces that include a bonus loft retreat for Zoë.

Michèle, who oversaw a massive remodel of the Taylors’ Atlanta home, was involved in the interior design of the Steamboat residence, which provided the perfect palette for her “transitional” decorating style. “The Taylors have excitement for both traditional and modern styles so we said, ‘Hey, let’s put that together in one house that, from the outside, is comfortable in Old Town,’” Gerber says.

The home’s peaceful vibe isn’t without surprises. Whimsical bubble print flooring and aqua-hued walls in the laundry make even the most boring household tasks fun. And then there’s the loft, where Zoë’s imagination and inspirations freely took hold with brightly painted pictures and poems.

“Zoë is absolutely ecstatic with her teen hangout lounge,” Michèle says. “I’m convinced she thinks it’s the coolest thing ever.”

After all, the family’s foray into Steamboat – from the slopes of Vail to a lonely mountain condo to, finally, a proud home – has been all about Zoë. After placing second overall in the U.S. Telemark Nationals last winter, 16-year-old Zoë recently was named to the U.S. Telemark “A” Team. The accomplishment highlights not only her athletic ability but her passion for health and wellness – values she hopes to promote among other teens.

“The major reason that we do this is not because she has had great success,” Michèle says. “For us, it has everything to do with the confidence it’s given her.”