Raising the Bar in the Pipe Raising the Bar in the Pipe

During the 2010 Winter X Games in Aspen, 23-year-old snowboard superstar Shaun White saa festars of his own. While practicing his most difficult halfpipe trick, a Double McTwist 1260 (three-and-a-half rotations packed inside two vertical flips), he slammed face-first into the superpipe’s lip, sending his helmet flying and head snapping back violently. After a brief medical exam, he returned to win a gold medal in both the X games and later the 2010 Winter Olympics in Vancouver. But the widely seen video of that crash –coupled with other high-profile halfpipe injuries – has generated considerable media scrutiny of the sport. Difficult moves unheard of just a year earlier – like the Double Cork, a corkscrew-like double backflip – are quickly becoming mandatory for aspiring Olympians. Critics cite the growing size of competition halfpipes and the bigger, more complex tricks they allow, and wonder whether the sport has become too dangerous. 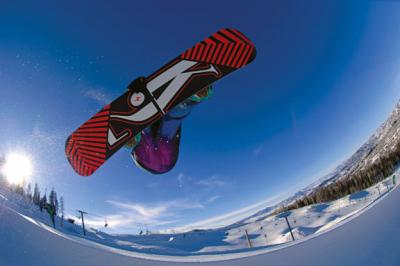 Kiwi snowboard instructor Dylan Davidson flying high out of Steamboat's Mavericks Superpipe. Photo by Larry PierceLocal athletes training at the Steamboat Springs Winter Sports Club are in the middle of the maelstrom. Local talents Matt Ladley, 19, and Maddy Schaffrick, 16, both members of the U.S. Team, have each suffered multiple concussions. Schaffrick says she has endured three or four concussions in the pipe, an event she has focused on since the age of 13. She describes her injury rate as “probably a little more than average.” Yet she is not deterred from pursuing further competition. “Injuries come with the sport,” she says. “We’re testing our bodies every day.”  Those at the sport’s highest level realize this more than anyone. White’s head-turning crash wasn’t an anomaly last season. Just days prior, Australia’s Torah Bright suffered a concussion while training for the X Games. She racked up two more during the weeks leading up to Vancouver, where she won her own Olympic gold. Less than a month earlier, Kevin Pearce, White’s chief American rival, suffered a traumatic brain injury while practicing White’s trademark Double Cork in Park City, Utah. The incident resulted in an abrupt end to his Olympic bid, a week-long coma, and months of therapy. A feTeam USA members wore “I Ride for Kevin” patches on their jackets at the Olympics. Then, on Feb. 13 at Oregon’s Mount Hood, rider Kyle Cryblskey, 23, was killed after crashing while attempting a jump.While other winter sports disciplines, from alpine racing to Nordic jumping, also come with inherent risks, these risks are magnified in an event with the technical complexities and airborne nature of the halfpipe, where top-level competitors drop into a U-shaped pipe 22-feet deep and can launch inverted, spinning tricks nearly 20 feet above the lip. The good news is that while halfpipes are considerably larger than they used to be, they are also better designed. In fact, more consistent, well-designed terrain features and systematic, progressive coaching has done much to mitigate the risk factors involved. Man-made snowboarding halfpipes originated around 1980, when Lake Tahoe-area boarders created a crude pipe in the Tahoe City dump. By 1983, the first ski resort halfpipe was created at Soda Springs, Calif., for a snowboard “World Championships” organized by snowboard pioneer Tom Simms. By all accounts, the hand-shaped pipe was weak by current standards, with a wide, flat profile and non-vertical walls about four feet high. Halfpipe construction made a leap eight years later, when a Colorado farm-machinery mechanic named Doug Waugh invented the Pipe Dragon, a rounded grooming device towed behind a snocat. It allowed resorts to more easily maintain halfpipe parks, which evolved into 10-foot-deep, 400-foot-long trenches with smooth, round transitions from the flat bottom to the near vertical walls. Still, many riders complained that the shape and small radius of the curved walls limited height of achievable air. More easily maintained pipes, more than 20 feet deep, with perfectly consistent, elliptical transitions, were made possible by sophisticated grooming tools like the Finnish-made HPG Pipe Grinder. Nick Roma, terrain park manager at the Steamboat Ski & ResortCorp., says 18-foot pipes are fairly standard at major ski resorts these days. Roma maintains Steamboat’s superpipe using an 18-foot Zaugg Pipe Monster, designed and manufactured in Switzerland. Roma says the Zaugg devices, which he calls “the best in the industry,” are nowidely used by ski resorts and major halfpipe event organizers. The biggest snowboarding events, like the X Games, Mountain DeTour and Olympics, use larger versions to create the 22-foot superpipes that are nothe elite competition standard. Roma says the consistency of pipe features from resort to resort allows riders to adapt their riding and tricks to nelocations with minimal surprises.Though pipes have doubled in size over the last 20 years, bigger doesn’t necessarily equal greater danger. According to Jon Casson, the SSWSC’s snowboarding program director, bigger pipes are actually safer in some respects than older 10-foot designs. “Twenty-two feet is the radius of the transition,” he says. “It allows you to go bigger, safer.” Casson explains that a bigger radius means a longer transition, and if a snowboarder crashes, it’s better to fall on the transition than a flat bottom. “If you were to take a basketball and drop it from 10 feet onto flat ground it’s going to bounce high. Drop it from 22 feet onto a slanted surface and it’s going to slide.”On the other hand, the incredible level of difficulty being attempted in elite halfpipe competition requires increasing skill and commitment on the part of athletes, and raises the potential for serious injury--as the Pearce incident demonstrates. An athlete faces certain objective dangers when a complex maneuver has the potential to land them on the lip.  “I wouldn’t use the word ‘dangerous,’”Casson says of today’s nemoves. “I’d say riskier. You have to be more precise and  bettertrained. Gone are the days when athletes were making up tricks in the middle of a contest.”Casson says risks can be managed through good coaching and a careful, systematic progression to higher skill levels. “Your biggest factor in injuries is pushing your limits too far,” he says. Young athletes at SSWSC first learn the basic interaction between their bodies, boards and the snow, then hoto manipulate that interaction. Gradually, Casson says, they are coached through progressively bigger jumps, rotational moves, and then on to harder tricks combining the various components they have learned. Foam pits and water ramps are used to train for more committing moves with smaller margins for error. 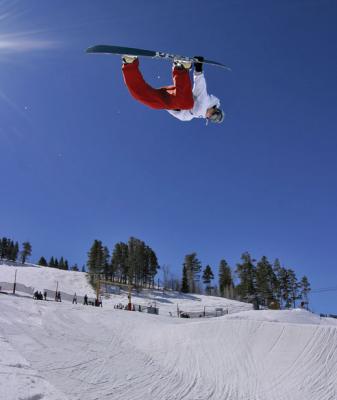 U.S. Snowboard Team Coach Spencer Tamblyn soaring ut of the Mavericks Superpipe. Photo by Corey KopischkeDespite the faster speeds and increasing levels of difficulty, SSWSC Athletic Director Sarah Floyd says the injury rate among all the club’s athletes “has stayed pretty constant” over the last two decades. She says the club is focusing more than ever on off-season conditioning and improved training methods to minimize injury potential. Steamboat resident Stephan Baden, whose 12-year-old son Nikolas is a huge talent in the halfpipe, knows there are risks in his son’s chosen sport. But he feels confident that his son’s coaching has evolved with the sport. “It’s done progressively,” he says. “Today’s training methods are far better than they were in the past.”Roma says the ski area uses an incremental, step-by-step approach in designing its terrain parks as well, encouraging the safe, gradual development of skills among freestyle skiers and snowboarders. “Everything we build, we start very small,” he says. “We provide a safe environment and the tools to progress.” Guests can practice in the Little Rodeo terrain park, move up to the Rabbit Ears Park and then on to the more advanced Mavericks. Halfpipe skills can be developed in a mini-pipe with non-vertical walls before riders attempt the 18-foot superpipe. The resort also emphasizes terrain park education with its “Park-wise” signage program and the presence of resort personnel to maintain features and ensure proper use of features. To a large degree, intelligent park and pipe design can minimize accidents; but ultimately it’s up to users to ride and ski within their ability. While injuries do occur in the parks, rates seem to be comparable to other areas within the resort. “There are just as many injuries in every day skiing as in the park,” Roma says. Indeed, the case could be made that other winter disciplines are at least as risky as halfpipe, especially considering that competitive snowboarders approach skill development in a more systematic way than athletes in many other activities. Even within snowboarding events, halfpipe may not be the most “dangerous” discipline. A 2006 study of Snowboard World Cup injuries placed halfpipe behind big air and boarder cross in terms of injury rates. Head injuries represented only 7 percent of all acute injuries across the disciplines, probably due to helmet requirements in World Cup events. And according to the National Ski Areas Association, the odds of a snowboarder experiencing serious injury or dying while snowboarding is less than one in a million. In 2008/’09 the association reported 39 fatalities out of 57.4 million skiers and riders around the nation, nine of which were snowboarders.

The SSWSC’s Casson says they may actually be seeing a slight rise in head injury reports recently “because we have more of an awareness of concussion injuries and their implications. The research out there is pretty scary.” Indeed, one reason high-profile snowboarding injuries have drawn attention is that medical research on the long-term effects of multiple concussive injuries--known as Chronic Traumatic Encephalopathy, or CTE--has also been in the news. Research by Dr. Robert Cantu of Boston University has uncovered a variety of serious, chronic symptoms among professional football players who have suffered repetitive head trauma, compelling the NFL to issue stricter return-to-play guidelines for players with concussions.After White crashed in front of the cameras, a medical team quickly cleared him for competition, and he was back in action within 15 minutes. Given the apparent severity of his head impact, Cantu questioned whether such a brief medical examination could have adequately ruled out a concussion. Some critics say professional halfpipe, like the NFL, needs stricter rules for returning injured riders to practice or competition. Sponsors, pro teams and athletes may not make the wisest decisions when prize money and prestige are on the line. Floyd admits that dynamic may occur “at the extreme event level” but emphasizes that concussions are an issue the club is “intensely focused on.” A year ago, the SSWSC began baseline testing for athletes’ visual and verbal memory, reaction time and visual motor speed, says director of operations Chad Bowdre. When possible head injuries occur, athletes are re-tested; discrepancies lead to a follow-up exam with a physician. “We’re trying to be proactive on this,” Bowdre says. As such precautions are adopted by youth programs and become accepted as the norm, professional-level snowboarding may be pressured to follosuit.Part of the pursuit of athletics is accepting the calculated risks and injuries that are, to a degree, the cost of doing business. Participants have to take some chances to advance the sport. While some feel that the halfpipe is pushing the bounds of acceptable risk, up-and-coming athletes are enthusiastic about participating in the sport’s evolution. “I’m loving it,” says Steamboat’s Schaffrick. “It’s a challenge and we’re all pushing each other.”