WE LIVE SUCH SPEEDY LIVES," says local yoga teacher Libbie Mathes. "Even here in heavenly Steamboat we all wear multiple hats and are running fast. Yoga slows us down. We have the opportunity to nourish mind, body and spirit with this practice. We hone our bodies so we can lead our full lives. We learn to watch and control our minds so we can be more present and conscious in all that we do. And we become aware of our interconnection with all life. A pretty good deal for an ancient practice, don't you think?"   Yes Libbie, I sure do.   Judging by the rapidly expanding size of yoga classes at Colorado Mountain College, 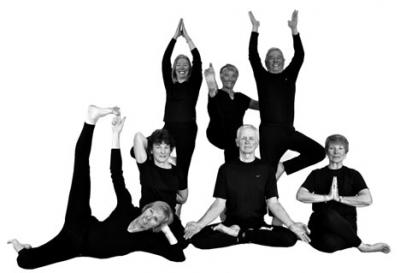 Pyramid of Power: Some of Libbie's more senior students (all over age 65) getting artistic with their poses. Photo by Kathleen Alexander. Old Town Hot Springs, Yoga Center of Steamboat and Steamboat Pilates Yoga and Fitness, plus special workshops via Aging Well, local schools and the Bud Werner Memorial Library, our community is embracing yoga with gusto.   I discovered yoga in Kathmandu. Outside, 20,000-foot peaks dominated the horizon,Hindu temples swarmed with devotees and Buddhist stupas served up eye-popping splendor � idyllic Asian scenes that Westerners often conjure with ideas of delving into meditation and yoga. In truth, I found yoga by wandering inside a small carpet-strewn room above an eclectic Nepali bookstore where incense, candles and tinkling tingsha bells dimmed the clank of cooking pots and rambunctious kids on nearby rooftops.   With trepidation, I embarked upon three-hour practices with a dreadlocked swami swathed in orange-robes. The experience was astronomically greater than simply stretching after a month on the trail. I marveled at yoga's immediate effects on my mind and body, the intense energy that it provoked and the deep sleep I earned.   The gift of yoga sank in when I returned home to Steamboat Springs and discovered hoeasily it resuscitated under the CMC gym's glowing fluorescents. Steamboat attracts a wealth of truly inspired teachers who have taken beautiful paths to land at the front of Friday morning class. We don't all need Nepal or India to hone our inner yogi � we have dozens of local guides from a variety of traditions to steer us down the yoga path. Of course, a little discipline doesn't hurt either.Carrie Nelson...on karma yoga and bringing a practice to everybody   Yoga Teacher Carrie Nelson discovered yoga at Gold's Gym during a stint in Maui in the late 1990s. It was her fortune to cross paths with visiting swamis who substituted for the regular teacher one day. After class she made a distinct realization: "I was vibrating at a completely differnt level."   Before long she found herself at their ashram (yoga and meditation retreat) in NeZealand, then studying in India where karma yoga (scrubbing toilets, cooking, guarding backpacks) often to the place of asana (poses). "I learned that yoga is not just an asana. It's a way of life. The first thing I did when I got there was shave my head. I didn't people to knoor judge me as I am here." Ultimately, she says the six-month experience was the hardest and the greatest thing she ever did.   Carrie witnessed fire ceremonies for 50,000 of the pooreset people in Bihar state, where her guru provided three meals a day, clothes ofr a year, farming tools, seeds, cooking pans and water to help create a prosperous community. She gleaned a strong message. "Give, give, give. When you cook, bring a cup to your neighbor. If you cook four loaves of bread, give one away. Do it without expectation for the reward," she says, emphasizing the importance of karma yoga in the fullness of the practice. "We'd rather do aerobic yoga than take a breath for five minutes."   Carrie teaches Satyananda classes that incorporate restorative poses, meditation and 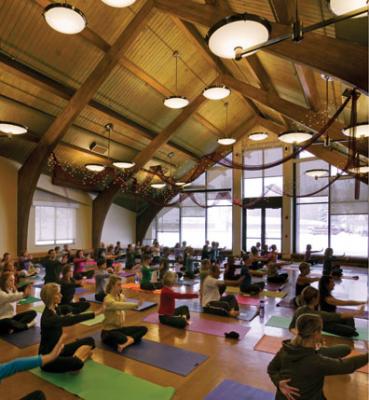 Lotus-filled Library: A class takes advantage of the Yampa Valley's yoga opportunities. PHoto Courtesy of Tim Murphy.breathing. Her dream is to bring yoga to our schools. "Kids get so stressed out. I'd love to have that whole school lie down for 20 minutes before lunch. I'd love to see the children teach the children," she says. "Yoga should be accessible ot everybody, even if you're in the Doak (Doak Walker Extended Care Center) and lying down and visualizing yourself doing it."Linda Sheean...on yoga, pregnancy and the birth of a practice   It seems fitting that local doula (professional assistant who gives support to pregnant and birthing mothers) Linda Sheean gave birth to Steamboat's first yoga class. These humble beginnings started in the basement of the library - in the preexpansion space that housed the children's collection. It was early 1991 and Linda, who had recently moved to town, started teaching Kripalu yoga one night a week. Class was by donation, meaning she often found offerings like a feather or incense wrapped in string instead of a $5 bill. The memory of these small tokens gives her intense joy to this day: "I wasn't doing it for the money," she says.   Linda discovered her own practice back in Massachusetts, where she lived an hour and a half away from the Kripalu ashram. A weekend sampler greinto a weekly "respite from being a full-time mom," then teacher training. Since then she has become a certified doula and expanded her massage therapy practice to include prenatal massage. These days, Linda teaches pregnancy yoga atthe Yoga Center of Steamboat, a class that has become de rigueur for pregnant Steamboat women. It equally draws brand-neyogis and experienced practitioners.   Linda teaches yoga as opportunity for integration: "It's a time in this hectic world to be alone in a room with other pregnant women. Your baby in utero needs as much attention as it does when it's out. Pregnancy yoga is about connecting with your baby, centering." She talks of yoga's intention and appreciation for a full belly, as well as modifications for a looser skeletal structure. Hermantra: "Be guided by your comfort."   "I love that there are so many different lineages (of yoga to practice) here. At different stages of life you need different things," Linda says. 'We need more and more variety. It's not about the external; it's about the internal flexibility. Every practice is different every day. No matterwhat you believe. It's not a religion. It's a science."Beth Boyd...on yoga, mediation & making the commitment   Yoga teacher Beth Boyd traveled to India in 2005 to study yoga with Swami Niranjananda Saraswati: "I had no clue that it was more than stretching. I got my world turned upside down," she says, recalling repetitive practices and days filled with karma yoga and meditation. "Even 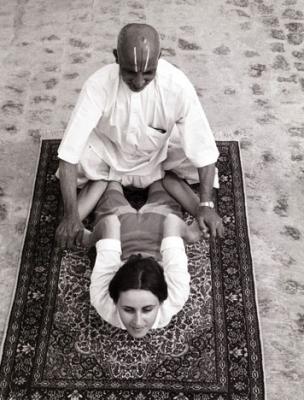 Yoga-covered Pretzel: Steamboat's Libbie Mathes practicing the Bhekasana (Frog Pose) with Guruji assisting circa 1963.takes away the aches and pains."eating lunch was practicing yoga."   Noshe teaches Yoga Nidra, which is practiced by lying on your back in Shavasana (corpse pose) and listening to her guided meditation. She has also recorded a CD, 'The Restoration Station," for home practice. One hour of Yoga Nidra is scientifically proven to be equivalent to four hours of deep restful sleep and relieve anxiety, tension and fatigue while restoring energy and balance. "If you have a buffet of yoga, Yoga Nidra would be the dessert," Beth says. "It's like a conscious power nap. You fill up your energy by being conscious. It's a nice form of meditation because you are lying down and it    Ultimately, Beth says visiting India keeps the fire alive, but she is focused on keeping the light bright here in Steamboat. Her advice is to find what works and commit to it. 'You can find awareness in anything -walking the dog, taking out the trash. Classes are for inspiration and connection with the community. Yoga isn't about flexibility... it's about you and where you are in life right now."Libbie Mathes...on connecting with tradition, finding yoga at every age, every level    Libbie Mathes' path to teaching yoga in the Krishnamacharya/Iyengar lineage at the Buddhist Center of Steamboat has been most auspicious. At age 22 (she's no71) Libbie found herself living in Madras, India, where her husband received his first Foreign Service assignment. "I was young, open and interested in mysticism. I was dropped into heaven," she says.   Via the father of a fellostudent in her Indian dance class, Libbie met her guru, Tirumalai Krishnamacharya - one of the foremost Indian yogis of the 20th century and teacher of many of today's most influential teachers including B.K.S. Iyengar and the late Pattabhi Jois. "The first day, the first minute, he put me on my head," she says. After six years directly studying asana and pranayama (breath) with Krishnamacharya, he gave Libbie permission to teach.   "That was more like an order," Libbie remembers. And she did - in Peru, Brazil and the U.S. - everywhere the Foreign Service took her. 'The receptivity was huge," she says. Libbie also studied with Mr. Iyengar and other revered yogis, all of whom instructed her to preserve the pure form of the specific tradition that was handed down to her by Krishnamacharya: "I haven't diluted anything, but I've added things," she says.   Libbie's own classes are advanced and intense, but she does not exclude anyone from the possibilities of yoga: "There are aspects of yoga for everyone at every level you want to commit. I have such respect for anyone who goes to any yoga class. It's counterculture - the pace, the earning, the doing, the acquiring - to stop and slodown and do what you want to do. You don't have to go to India. There's marvelous yoga here.

Crossing the path to Pilates   Despite their very different origins, modern American

yoga and Pilates often get grouped together as physical practices. While yoga is a 5,000-year-old tradition, Pilates began as the theory of 'Contrology" developed by one-time boxer Joseph "Joe" Pilates while he was rehabilitating felloprisoners during World War I. Later, Joe became disenchanted with European politics and moved to NeYork, where he famously delved into working with dancers.   Joe studied movement and breath and ways to keep strength via nonweight- bearing exercise because his patients were often on their backs. Using mat exercises and apparatus (often described as "torture devices") involving pulleys and springs, Joe developed a focus on breath, length,strength, control and precision. Much like the specificity in yoga poses, Pilates developed to give purpose to each movement.   Local physical therapist and Pilates instructor Pamela Turner made a pilgrimage to Joe's birthplace in Germany and his original studios in NeYork. Joe made astounding observations onmovement, strength, stretching and balance that were way ahead of his time, Pamela says. She returned with deep reverence for the quirky brief-clad man whose athleticism Sports Illustrated documented in 1961, long before Pilates became a household word.   "Pilates takes you to the edge," Pamela says, noting that the exercises give practitioners an awareness of where muscles and ligaments should safely stop in a bend or a twist. Pilates goes beyond muscle and bone to emphasize controlled breath and circulation. It creates patterns in hoto use your muscles so you don't wear them down.   "Yoga is more position oriented versus Pilates being about what's firing neuromuscularly to get you there," says Wendy Puckett, a certified Pilates and Core Power Yoga instructor. She says it's all for the better good: "If this many people in our town are feelinggood, what does it do for our community? I'd rather have someone standing in line with me at City Market who just came out of yoga or Pilates class rather than an uptight grumpy person."