Elder Skatesmen - Howelsen rink has a way of hiding age   The curse of the Yampa Valley equates to the fabled Never Never Land. No one wants to groold here, and heaven forbid you don't stay competitive in a plethora of sports until your body parts give out completely. A local group of hockey players is one-upping even that, defying the odds of ageless competition as well as AARP stereotypes. 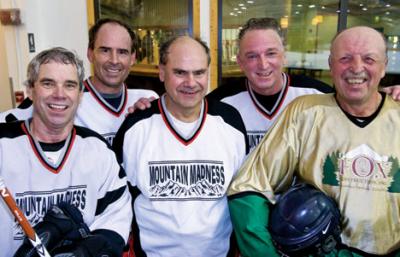 Senior Skaters: Mike Woolverton, 58; Norbert Turek, 51; Dough Labor, 52; John Shipley, 55; and sexagenarian ringleader Tom Fox, 60. Photo by Corey Kopischke.   "There's definitely a lot more older players these days," says Howelsen Ice Rink manager Mike Albrecht. "It's a fun sport in an active community." According to 65-year-old Bill Davis, more than a half dozen over-60 players compete in the adult hockey league, including ringleading 74-year-old Foster Tudor. he has been part of Steamboat hockey more than 20 years claims his on hiatus from games has been from injuries sustained on the ice. "I don't go at it like I used to," he says. "We're always reminded that we have work the next morning."   Whether they've skated their entire lives or have recently put on the pads to keep 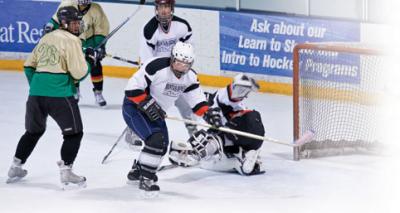 The Puck Stops Here: John Shipley, 55, uses his age and experience to save a goal as teammate Norbert Turek, 51 looks on.up with their kids (and grandkids), this 'elder elite' of silver-haired skaters is as addicted to hockey as skiers and riders are to Steamboat's powder. "My kids play, and I never thought I'd see the day that I'd be on the ice playing with them," says 62-year-old goalkeeper Thormon Idzahl. "It's really something special."   Describing themselves as a group of self-employed players, these men, and a handful of women, treat hockey as a workout as much as a social event full of comraderie. "You could lose a game 0 to 10 or win with the same score, but after it's over it doesn't matter," says Thormon.   Either on a league team or swinging through for a drop-in game, these locals treat Howelsen's ice arena as their second home. "It's hard to hang up your skates," says Norbert Turek, the young buck at 51. "Being a hockey player is like being a patron saint of a ski town. You're like Peter Pan for Steamboat."   The adult league is non-checking, although some hits do happen. This keeps the players focused on having fun and getting exercise rather than doctoring wounds. Most commonly, players might wake the next morning with bumps and bruises, but none more crucial than those to their ego."Once you put on the pads you're like a rodeo clown," Norbert says. "You feel a lot less destrucible."Horsin' Around - Winter Carnival Street Events offer lessons for all (espicially Dad)   "She's going all the way to Hayden, folks!"   Normally, I wouldn't pay the announcer much mind at the Steamboat Springs WinterSports Club's Winter Carnival street events. But tethered to the end of the rope, being pulled by Lightning, the fastest horse in town, was my 6-year-old daughter, Casey, holding on for dear life. And she was showing no signs of letting go, even a block past the Eighth Street finish line.   Not that I can blame her for the death grip. Legs spread-eagled like Park Smalleyback in his day � so far apart that her butt nearly touched the snow-covered street � she was in pure survival mode. And I was, too, facing an equally tenuous situation explaining our soon-to-be-missing daughter to my spouse. 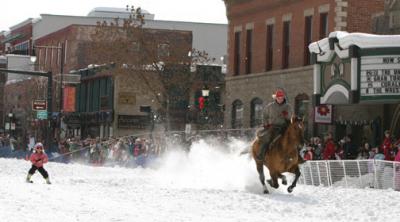 The problem was she was being pulled by a horse named Lightening, and she was showing no signs of letting go...Photo by Travis Gainsley.   Seeing hoit was Casey's first time in the event, I probably picked an inopportunemoment to meander away from her position in line at the start to chat with a friend behind the fence at the curb. While I was gone � however briefly, I might add � Casey advanced in line precipitously andwas quickly at the front looking up to the Wyatt Earp organizing things.   "What speed do you want?" he asked, tipping his Stetson. "Slow, medium or fast?"Bless her heart, she answered "fast," as most Steamboat tykes would, without missing a beat.   Then she took off like the space shuttle behind the fastest horse of the day. Pinkparka splattered with manure, snopeppering her goggles, and shoulders wrenched out of their sockets, she held on to the finish line, infinity and beyond, the crowd roaring and turning their collective heads as she headed to Hayden and the sunset.   She finally let go a block and half past the finish line, suffering the walk of shame back east to the crowd. But there was no shame at all in her results, as her time topped the next 10 riders, all two to three years older. When all was said and done, she notched a bronze in the event, thanks to a distracted dad.   Of course, a lot of it had to do with the equestrian engine. Later, as I walked her toher role skiing with glosticks at Howelsen's nighttime festivities, I couldn't help but overhear two ladies talking.   "There she is," they said behind steaming breath, recognizing Casey's pink, and nobrown, coat. "That's the girl from the street events. She had the fastest horse in town." While I swelled with fatherly pride, I stayed a bit closer for her nighttime ski down the face.
Article Gallery [3 Images] Click Any Image To Expand