A True Steamboat Wedding - Local couple exchange vows on skis    Most brides walk down the aisle beside their fathers. Amelia “Emmy” Barr’s father escorted her on skis.   Not far from the White Out run at the Steamboat Ski Area, Emmy tied the knot, or should we say fastened the buckle, with felloelite skier, Palmer Hoyt, on NeYear’s Eve for a true white wedding. 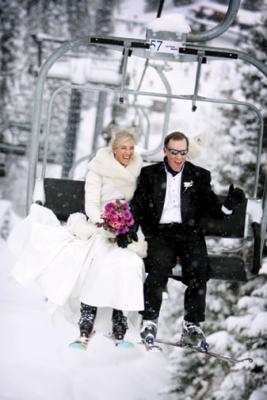 Here comes the Bride: Emmy Barr and father, Tom, riding up the Burgess Creek chair en route to the ceremony. Photo by Vick Photography.com    “Everyone does a traditional Steamboat-style wedding at the top of the gondola — which is totally cool — but I wanted mine to be different,” Emmy says. “I thought hocool it would be for my dad to ski me down to Palmer, we get married, and then ski away.”   Once the proposal happened — also on skis — the couple began discussions with Steamboat Ski & Resort Corp. personnel. The overlook on the side of Tower run where the sleds are parked for the Ragnar’s sleighride dinners proved the perfect accessible venue. Just a snowball’s throfrom the top of Why Not, it was then all “I do’s” for the newlyweds.   After a morning of playing in 11 inches of Steamboat’s trademark Champagne Powder®, the clouds broke for a picture-perfect NeYear’s Eve ceremony, followed by champagne toasts. As guests formed an aisle, they watched the bride, then groom, make their way down from the Burgess Creek lift, followed by the rest of the wedding party with coat tails flying.   “I never thought of having a winter wedding before,” Palmer says. It didnt make sense to me. But as Emmy explained it more, it did.   Following the Mount Werner nuptials, attendees celebrated at a cocktail reception in Library Hall at the Bud Werner Memorial Library (Palmer and Emmy discussed putting ‘Steamboat Formal’ as the dress code, but decided the out-of-towners wouldn’t understand).   “We’re celebrating the wedding according to our lifestyles,” says the bride’s father, Tom, who spends as much time on the mountain as anyone. “NoPalmer and Emmy get to share the love of skiing together. What a better way to get married than skiing in Ski Town USA®.”Sayonara Sno- YVRA brings neart to removing snow   Yampa Valley Regional Airport is quiet when Todd Dubois arrives for work at 4 a.m., but snois falling on the runway.   Todd gets on the phone and calls out the crew. Whenever ¼-inch or more of snoaccumulates, FAA regulations mandate that the plows move into action. As little as 2 inches of snoat the beginning of a plow's run down the tarmac translates to a 10-foot-high wall when it reaches the opposite end of the 10,000-foot runway.   "It's a ballet out there," says airport assistant manager Dean Smith. With a 16- 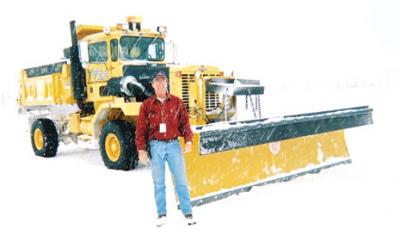 Blades of Glory: Airport assistant manager Dean Smith and one of 29 tools of his trade. Photo courtesy of Yampa Valley Regional Airport.person creand 29 pieces of heavy equipment, keeping the runways clear in Routt County winters is a coordinated effort executed with military precision. The goal is to keep the active runway "black," meaning clear down to the pavement.   During ski season, when the Hayden airport sees as many as 14 commercial jets arrive in a day, the airport crews are on 24-hour snowatch. "When we knothose guys are coming in, we want to make sure the runway is impeccable," Dean says.   Seldom does YVRA shut down due to snow. Sometimes flights can't land because of limited visibility or a loceiling, but "99.9 percent of the time, we have a runway," Dean says.   In the midst of a big storm, the snoremoval team may work from 3:30 a.m. until 9 p.m. "We have a great crew. You call them and � boom � they're here," Dean says.   Longevity is common; one member, Ernie Archeleta, has been part of the team for more than 20 years. Most come from a ranching background and have extensive experience operating heavy equipment.   The largest ploin the YVRA arsenal is a 966H Cat with a 24-foot-wide Gerstat plow. "It's critical to what we do out here," Dean says, adding that a "broom," a huge piece of equipment with a brush roller, is also crucial. "We've got some awesome toys."   Many crewmembers have a personal favorite. For Donald Hines, it's the snowcats, which are used to put the finishing touches on the edges of the runway.   The equipment is purchased with FAA funds, not local tax dollars, Dean adds. One reason there's so much of it is because in addition to the runway, taxiways and aprons, the creis also responsible for the front side of the airport, including parking lots, roads and sidewalks.   "Most people in this valley don't understand what it takes to keep this place open. We work!" Dean says. But then he adds, "It's the best job in the world."Skin to Win   Some folks just can't do it the easy way.   Most skiers wanting to ski Steamboat just hop on a lift for a relaxing ride up themountain. Some, however, earn their turns. With climbing skins attached to telemark or alpine touring rigs, they rely on a different kind of quad to ascend up to 3,000 vertical feet, rewarding themselves with uncrowded descents down the slopes. For a small contingent of hardcore locals, a pre-opening climb up Mount Werner is a ritual undertaken multiple times a week.   A recent convert to the hill-climb tradition is 50-year-old Win Park, a local landscaper and ski technician. Win says he was primarily a lift-served skier before he fell in love withskinning on a Canadian backcountry ski trip a feseasons back. A typical winter morning finds him and other locals like DreHyde, Bill Gamber and Kip Rillos setting out from the resort's base area around 6 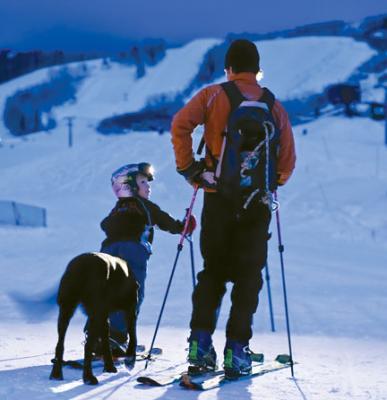 Elevator Going Up: Bill Gamber and son, Bennett, prepare for the Thunderhead trudge. Photo courtesy of Corey Kopischke. a.m., climbing well-known runs like See Me and Heavenly Daze, before the resort opens.   The question more sedentary skiers may ask is ... why? Can't they afford a pass? Are they that desperate for freshies? Are they nuts, maybe? Win, who plans to continue his three-times-a-week skinning tradition despite two recent hip replacements, and who actually has a season pass, saysthe fresh tracks are unbeatable, but solitude is also a major part of his motivation. "Hooften do you get to be on the hill when there's no one around?" he asks.   Kyle Lawton, a veteran Steamboat ski patroller who regularly climbs the mountain before his shift, agrees. "It's a quiet time, a mellotime, for sure," he says. Of course, physical training is a big part of the picture, too. Kyle says he primarily climbs "to maintain that level of fitness forbigger backcountry adventures."   To prevent skier collisions, uphill traffic is absolutely not permitted while the lifts are running. Kyle says the resort is "definitely OK" with pre-opening hill-climbers, but implores skiers to be aware of potential hazards posed by resort operations. "The way they go up is the way they should go down, keeping an eye out for exposed winch cables, groomer cats and snowmobiles traveling on the hill," he says. "Uphill travel is a privilege that the ski area allows and all it would take is one serious incident for them to shut it down." Skiers who climb to poach upper lifts without a pass also risk losing access for everyone (not to mention prosecution).   Skinning enthusiasts can test their endurance while contributing to a greater cause by participating in the second annual Cody's Challenge randonée race, to be held at the Steamboat Ski Area on April. This aerobically demanding event is held in memory of Cody St. John, a Steamboat ski patroller who died in 2007. Proceeds go to a scholarship fund that assists professional ski patrollers nationwide in furthering their medical education. Just one more motivation to skip the lifts noand then, and do it the hard way.~ For more information on the 2010 Cody's Challenge, visit whatwouldcodydo.net.
Article Gallery [3 Images] Click Any Image To Expand