King of his Castle: Nelson, on the stairs leading to his home's second floor, which has a kitchen, dining room, living room, office, master bedroom and toadditional bedrooms, all under a post-and-beam ceiling. Photo by David Patterson

NELSON CARMICHAEL is the kind of guy who likes to go for it, whether it's earning an Olympic freestyle medal or building the ultimate Steamboat Springs ski home � which is exactly what he created in his 3,500-square-foot, cathedral-ceiling abode.

Back in 1977 when Nelson's family moved to Steamboat, no one would have thought the 12-year-old from Niagara Falls, N.Y., would someday become a two-time freestyle world champion and Olympic medalist. "I was terrible," Nelson says. "But I gradually got into it, joined the Winter Sports Club and began competing for the U.S. Ski Team." Nelson skied for the U.S. team for 10 years, winning two World Cup mogul titles and competing in two Olympic Games. He won a bronze at the Olympics in 1992.

Following the Games, Nelson toured with the Pro Mogul Tour but after 20 yearsof competing, he decided it was time to retire and return home to Steamboat to settle down and become involved in neventures. "I got into marketing for the ski area and became a ski guide for Marabou Ranch," he says. "And I also decided to build this place."   It took awhile for Nelson to find the perfect lot, which he did in the Whistler neighborhood. "I looked at this lot for several years, trying to figure out hoto take advantage of the views and seasonal stream running through it," he says. "I wanted to be in an older neighborhood close to the mountain, so I kept coming back here. 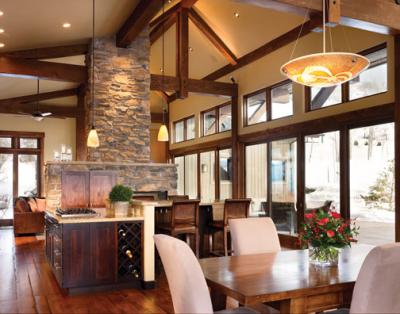 Pine plank floors and a double-sided gas fireplace keep the space cozy, while cathedral ceilings and open views give the home an airy feel.Photo by David Patterson.

After I realized I didn't have to place my home the same way the neighboring homes were built, I decided to go for it."   In a neighborhood of low-key, conventional houses, Nelson hired local architectural firm Vertical Arts to help him come up with something not-so-lokey. "I wanted the outside to feel like part of the inside, and I wanted a courtyard concept to take advantage of the stream and the views of the open space," he says. "I think I did alright."

Indeed he has. The home's interior is as laid-back as Nelson is. It also has to be one of the tidiest pads on the planet. The foyer, with its 30-foot-high ceilings, sets the tone when you first enter. A stamped concrete patio continues into the entryway, accomplishing his goal of bringing the outside in. On one side of the entry is a decked-out apartment, and on the other, the garage. Heading upstairs you enter what Nelson calls a "hybrid conventional/timber-frame house" � half timber-frame,half stick-built, with huge posts and beams crisscrossing the ceilings. 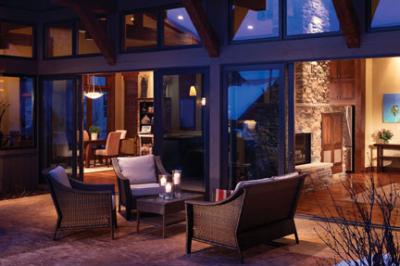 "I wanted the outside to feel like a part of the inside," says Nelson of the large great room divided into three sections - dining room, kitchen and living room - which open to the outdoor courtyard. Photo by Dave Patterson.

The large, linear-shaped great room is divided into three sections - dining room,kitchen and living room - which open to the outdoor courtyard. Double-stacked alder cabinetry, Silestone countertops and a cultured stone mantle make the kitchen sleek, while pine plank floors and a double-sided gas fireplace keep the space cozy.   Also on this level are two bedrooms, one for guests and the other for Nelson's 12-yearold son, Noah, who lives with Nelson parttime. A huge master bedroom suitable for an Olympian is just off the living room, sporting a handsome master bath as well as an enormous walk-in closet, where Nelson stores his one shelf of clothing. 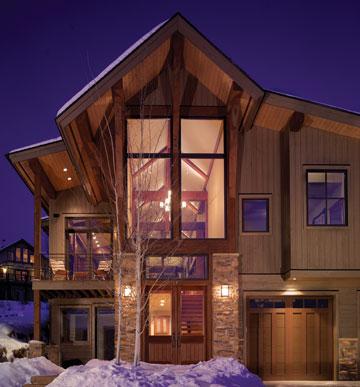 A stamped concrete patio continues into the entryway, bringing the outside in. Photo by Dave Patterson.

Construction on the home began in 2007, and took a year and a half to complete.While Nelson served as the general contractor - among his other pursuits is previous construction experience - Colorado Professional Builders did the frame work and Native Excavating the landscaping."Everything about building it went smoothly," Nelson says. "The permits took awhile, but everybody was great. I think my biggest challenge was building in an established neighborhood and keeping the neighbors happy. We made a big mess and a lot of noise. But now that we're finished, hopefully the neighbors like it. I think everything turned out all right."

Besides, who wouldn't want an Olympian as a neighbor?