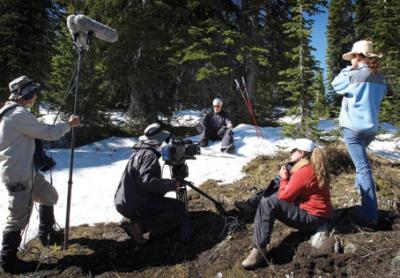 Leading the charge to attract producers to this area is the Yampa Valley Film Board. The 20-year-old nonprofit represents an expansive region including Routt, Moffat, Rio Blanco and Garfield counties. It fulfills this role by being “Camera Ready,” a term coined by the Colorado Office of Film, Television and Media that entails working with communities to understand the industry’s needs.

Like a fine-tuned machine, everything has to work fluidly for a production to come together. Molly Killien, media manager for the Steamboat Springs Chamber Resort Association, is the liaison for the YVFB and funnels requests from the production industry to appropriate businesses and individuals.

Local governments, forest service offices and other agencies facilitate by issuing permits, closing roads and coordinating police, fire fighters and other services. By creating relationships within communities, understanding local resources and working closely with the state film office, Molly and the volunteer YVFB members are able to entice productions to come here.

“Because this region has many diverse looks, it appeals to a wide variety of productions,” she says. “People come from all over the world to take advantage of our scenery and amenities.” Even small productions can mean big business. According to the Association of Film Commissions International, production companies spend between $7,000 to more than $300,000 per day. In addition to the locations and services they lease, lodging, restaurants, transportation, retail and even local actors and models benefit. The finished product then becomes an advertisement for that location — in our case, Steamboat.

THINK OF A STEAMBOAT-SIZED Spoleto Festival — Charleston’s renowned art and music festival or the Italian original — and you’ll have the right idea.

The Steamboat All Arts Festival, scheduled for Thursday through Sunday, Aug. 19-22, is in its second year bringing together visual, performing, culinary and other types of art. The premise: highlight the town as a happening art spot, while emphasizing local artists as well as big name performers who make stops in Steamboat. 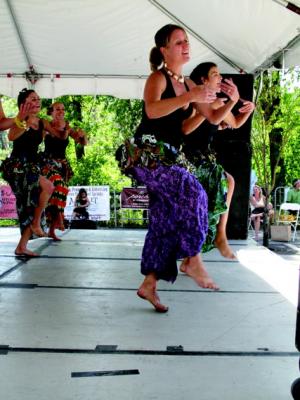 The All Arts Fest offers everything from African dancing programs...“We want to highlight the quality and diversity of visual and performing artists in our community,” says Sandy Evans Hall, executive vice president of the Steamboat Springs Chamber Resort Association. “It showcases the abundant arts and cultural traditions our valley has to offer.” 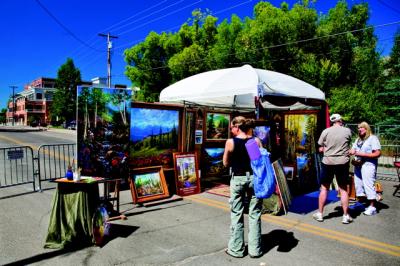 ...to booths highlighting local painters.The general shape and feel of this year’s event will be much the same as last year’s inaugural festival. A gallery art stroll will take place on Thursday; the Yampa River Art Stroll, held each day, will highlight local and regional artists; and a tour of local art studios takes place on Sunday. Art-related workshops will occur all weekend, offering the chance to try a variety of art forms, be it dancing, painting or cooking. The Strings Music Festival presents Asleep at the Wheel on Friday, and wraps up the season with two performances on Saturday by the Golden Dragon Acrobats from Hebei, China.

The Steamboat Springs Arts Council and Bud Werner Memorial Library will team up to offer a free foreign film, with the Arts Council hosting a melodrama at the Depot, which will also stage a community block party Sunday afternoon. As the organizers say, “Come for the skiing, stay for the arts.”

SANDY GRAVES GAVE BIRTH not only to son, Sawyer, last year at the Yampa Valley Medical Center, but also to an art installation idea that is nearing the end of its gestation.Sandy’s large mural is a high-relief sculpture in three sections that will grace the Family Birth Place just left of the double-door entryway.

It is in three sections, with two breaks for doorways, and is one of the larger pieces of art Sandy has ever created. Inspired by her own recent birthing experiences, the themes of the three sections came to her easily. She and husband, Matt, have two children under the age of 5. “The birthing center is a special place for me,” Sandy says. “My children were born there and the people there do an exceptional job. I’m honored to be a permanent part of it.” The first section features the head and arms of a mother holding a baby; the second depicts a father and child; and the third a “pregnant forest nymph.” The sections are connected by smooth, wind-blown lines that pick up and end each section of the mural.

The mural’s art nouveau style is nefor Sandy — she was inspired by the work of Alphonse Mucha, a Czech artist active at the turn of the 20th century. “I enjoy the opportunity to study netechniques, and when this project arose I wanted to do something special — I decided to use the art nouveau style because it is so feminine and ornate,” Sandy says. Art nouveau is stylized and uses intensive patterns, often showing people — especially women — in Neoclassical robes. 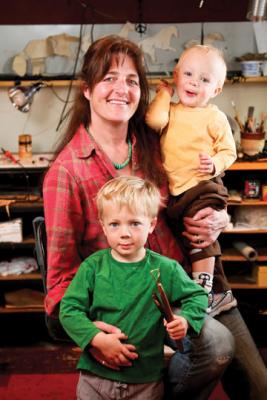 Mural Mural on the Wall: Sandy with sons Sawyer and WyatteSandy is better known for her horse sculptures, on sale in galleries across the country, and her realistic pieces such as the Chamber Legacy sculpture on the courthouse lawn on Lincoln Avenue. Her newest mural is beautiful and intense in its portrayal of the bonds between parent and child.