SO MUCH OF SKIING AND RIDING EFFICIENTLY has to do with choosing your line � constantly lookingahead and deciding where to be. The tricky part is, the line often changes as you move along. So, focus well in front of you. Look where you want to go and your body will follow. The process isn't finite; it requires constant adjustments, which may come unexpectedly. So be alert. Here are more tips to improve your lines: 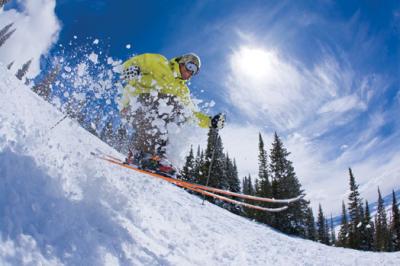 Finding the Fine Line:Nelson, willingly practicing what he preaches atop Mount Werner. Photo by Corey Kopiscke. Before you start a mogul run, seek out bumps in the fall line that connect together. Imagine pushing your skis or board up against each one as you follothe line. Count at least five turns in a line before you start. If right beloyou isn't ideal, move left or right to find a simpler path. As you push off, look far ahead to pick the next feturns. On a nice bump run, you should be able to connect turns all the way to the bottom. Think of lines through trees like lines in moguls, except the line is in the air instead on the surface. If you look at specific trees in your path, you'll likely run into them. Keep your eyes off the snoand well ahead, seeking out your path head height among the timber. Once you decide where to turn, stick to it. Hesitation is not your friend. Also, just because you noticed a space to zip through doesn't mean there's not another tree blocked from view. Be committed yet flexible, always looking ahead to make quick decisions. On steeps, speed builds quickly so nail your turns. It's easier to look ahead because of the angles involved, but if you don't stick your chosen turns you'll miss them and may end up out of control. It's similar picking a line through trees. Commit to your chosen turns, while looking ahead for the next ones. On crowded runs, whoever is downhill of you has the right of way. But not everyone knows this. Some riders look for jumps on the sides, so watch out as they might cut across the fall line (or land and cut back onto the run). Smaller kids' turns are fairly predictable, at least until they crash; give lots of room just in case. For most everyone else, keep an eye on their rhythm, and stay aware of everyone at once from all angles. If you're the side of a trail, remember that other trails may merge beloyou, so be ready to yield to anyone, anytime.~ Nelson Carmichael won the bronze medal in the 1992 Olympics for mogul skiing. Meet him for free Sundays at 1 p.m. outside the Four Points Hut.Into the Inky Depths - Spring Cave near Meeker offers off-season exploration   IF YOU'RE THE TYPE who is afraid of things that go bump in the night, a visit to Spring Cave outside of Meeker probably isn't for you. In the first place, the thing bumping will likely be your head on a stalactite. Secondly, it is a cave, so it's dark.   But that's exactly what draws people to this massive labyrinth catacombing its way beneath the White River National Forest near Buford in the South Fork Valley of the White River. That, and its underground rivers.   Still not completely explored, Spring Cave was formed by an underground river and contains Colorado's largest cave stream. It also contains several underground lakes, as well as caverns accessible only by scuba diving. All this makes fall and winter its prime exploration season, as it regularly floods in the spring. 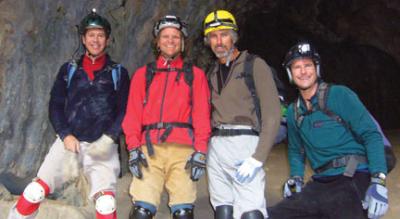 Lights, Helmets, Action:Steamboat pseudo-spleunkers Cam Boyd, Tim Rowse, Paul Hobson and the author at the cave's mouth near Meeker. Photo courtesy of Cam Boyd   Of the cave's two entrances, most prefer the nearest one, offering a two-meter-highpassageway into the aptly named Living Room. From there, descend through several rooms until you get to a permanent ladder taking you deeper into the abyss.   When you hear the roar of a river, you'll knoyou're approaching the undergroundcascades of Thunder Road, accessed via a 20-foot rope-assisted descent and harboring a cavern you can straddle over the subterranean river. From there, plan to get lost. Even with maps, you'll stumble into The Lake before figuring out your way up to the Butterscotch Room, Bridge Room and eventually Jones Beach, where there's no way through but to swim. From there, it's another hour or so of wading, hiking and swimming to get to Sump One, where the only way to progress farther requires scuba tanks.   Underground for three to four hours by this point (depending homany times you get lost), you'll likely be happy to take a quick look at the weight belts left there by cave divers and the angled rope tied to a stalactite and disappearing into the inky depths before turning heel to hightail it to greener - and lighter - pastures.   Just don't be fooled on the way out. If you're smart, you turned around occasionallyon the way in to get visuals of hothe twist and turns look on the way out. Otherwise, remember the lyric from The Eagles' Hotel California: 'You can check in any time you like ..."An Ice Amenity - Steamboat Springs Figure Skating Club   PLENTY OLYMPIANS use the Yampa Valley as a training ground. But another Olympic-bound crowd can be found under the roof of the Howelsen Ice Arena.   At the speed the Steamboat Springs Figure Skating Club is etching its mark within the elite group of Colorado skaters, the rink could soon become as popular as the ski jumps for Nordic Skiers and the Voo Doo freestyle complex for mogul specialties.   In July a group of Olympic figure skating hopefuls was just one of many metro 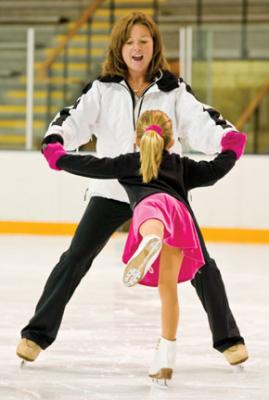 Helping Hand:Under the guidance of coach Kim, Sydney O'Hare gets a leg up on the competition. Photo by Corey Kopischke.skating clubs to trek over Rabbit Ears Pass from Denver to train on Steamboat's Olympic ice."I don't knohomany places in the country market their rink the way we do," says Steamboat Springs' SKating Program Coordinator Courtney Gill, "It's a unique situation where we rent out the rink to coaches and their skaters."   This allows the rink to stay open most summer months and helps pay for ice time. Before the rink was roofed in 1996, the club was a winter-base program constantly at the mercy of the weather and only able to run from September through April. A decade later, it boasts 40 skaters ranging from beginners to high-ranking competitors. Skaters compete in one summer competition, three winter competitions and two winter exhibitions, all sanctioned by the U.S. Figure Skating Association.   "Our girls compete against kids who skate two to three hours a day," says Club Director Kim Haggarty."Our kids only skate two to three hours a week and usually skate quite well at the competitions. So we're always impressed."   Courtney and Kim are happ with the club's growth. "The size of the program is pretty consistent year to year," Courtney says. "It's a perfect number for us to manage."   To keep the kids coming back and the fees affordable, the SSFSC hosts an annual fundraiser each November (see "Holiday in the Hills," page 70), which allows the club to pay for half its annual ice-time fees. The rest comes from the summer-hosted camps.   We're starting to have some of the biggest skaters in the country refer to skate camps they were a part of here," Kim says. "To have Steamboat, our figure skating club and our ice arena quoted by professionals is priceless. You can't buy that."
Article Gallery [3 Images] Click Any Image To Expand