License to Poach - Reminiscing on a year that sa117 guest days    A LOT OF PEOPLE have grandiose dreams of owning a house in a ski town – a minimal commute to the slopes, ski rack inside the front door, crackling fire, even a strategically positioned dump light outside to monitor snowfall. When we built our home in Fairview, however, we learned that it also has its pitfalls.   The culprit: out-of-town guests and their penchant for poaching floorspace. It doesn’t matter if they’re invited or not: they all leave empty toilet paper rolls and socks buried in the sofa.    At first it didn’t bother us: my wife and I were excited to shooff our 1,800 square feet of logstrewn splendor. Besides, I had ample favors to repay from time spent on the other end of the couch. 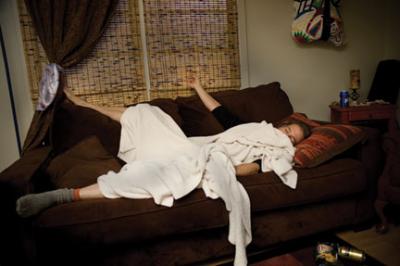 House Guest Rule #113: Never sleep in later than your hosts. Photo courtesy of Makiya Crochiere.    We started tracking the accommodation avalanche once it began to rumble out of control. Trashcans overflowed, the coffeemaker sounded its last gurgle and ground-pads lay scattered in a half-curled disarray. The municipality also began to take notice: bottles flowed incessantly to the recycling curb; our electric meter spun like a compass at the North Pole; and the sanitation department called in reinforcements.   The motel mayhem started Thanksgiving weekend when Tim showed up with three friends. Counting each body imprint as one “guest night” (four people, two nights), the tally soared to eight. Two days later, high school friend Jeff arrived, staying for six nights, bringing the total to 14. Then came the Great In-laInsurgency … cousins from Nebraska outfitted with 160-cm skis with safety straps and silver-toed Tyrolias. Three of them for two nights, snowballing the count to 20 before the holiday season even started.   A festragglers brought us to Christmas and the dreaded Family Onslaught. Mom, sister, sister’s husband, another sister, brother, another brother, brother’s wife. Three nights each, except for Mom, who stayed four more so she could rearrange the kitchen. The day she left sathe couch pillows fluffed just in time for John and Keith, more holdouts from high school. Two more nights, bringing the total to 49. Then it was my wife’s turn to contribute to the count as her twin, overlapping with John and Keith, set up camp for nine nights. Fifty-eight and counting.   A brief reprieve let us vacuum and restock paper towels before the next deluge. By February, two more sets of friends had played weekend warrior, and a brother and repeat visitor had returned for seconds. Then came the Great Infiltration, six friends for two nights, followed by the Second Coming of Mom and the Father- and Mother-in-laPenetration. Eighty-nine and it was only mid-February. Things slowed down, but we eclipsed the 100 milestone on March 19 with another visit from Thanksgiving Tim. The Infant Infringement, consisting of two couples, two cribs and two food-flinging babies, brought the total to 112 (we had no problem tallying the babies equally). By season’s end, the final number read 117, with dogs adding another 32.   Guinness might not have a couch-surfing record in its annual compilation (if it did, it might reside right next to eggeating in importance). But even if they don’t give us recognition, it’s a number we’re proud of – and one we hope will still stand after this season’s surfers have come and gone. Hints for House GuestsPlanning on doing some couch-surfing on your own?Following are a fehints to make things easier for your hosts:~ Shoup at the door with a 12-pack and bottle of wine … then return to your car for your bags.~ Stash your luggage inconspicuously (behind sofas, in mudroom closets, etc.), not in the middle of the living room.~ Offer to shop and cook dinner.~ Volunteer to wash dishes.~Surprise your hosts with breakfast.~Fold up your sleeping bag and ground-pad each and every morning, and stash them out of the way.

Yule Log Searching 101 -Hints for Steamboat's tell-tale treasure hunt   On an unidentified date, an anonymous citizen hides a 50-pound log under cloak of darkness somewhere in the city limits. Ten clues are given in early December. The riddles, written by committee from the Tread of Pioneers Museum, take seekers on a journey through Steamboat Springs' history and locales.   The first clue begins where the log lay the previous year, with clues two and three 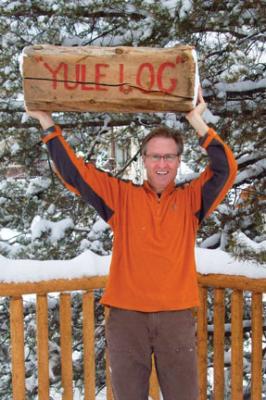 Wintertime Winner: Last year's Yule Log locator Randy Nelson, hoisting his prize high overhead. Photo courtesy of Randy Nelson.establishing a direction of travel (not always a direct route). One lucky searcher finds it each year, and with it $150 in Chamber bucks and ever-important, yearlong bragging rights.   What can you do to increase your odds of finding it, and becoming a winner instead of a Yule Log Loser? Steamboat Magazine went to past winners and even the clue-writers themselves to up your chances for success.   "I never understand everything in a clue. You can get off track. Remember that you're on a trail leading to the log." ~ Last year's finder, Randy Nelson   "Think of everything for every clue and toss ideas around. We really enjoy the history." ~ Shaunna Watterson, whose family has recovered the log on multiple occasions   "Be up on recent changes, neparks, roads and buildings. Go out and look for it. It helps to knowhere it isn't." ~ Glen Farrell, past winner and Shaunna's cousinADDITIONAL TIPS FROM THOSE IN THE KNOW:Team up: Brainstorm ideas and split up the research. Plus, this will give you someone tosuffer with on cold, dark searches.Knolocal history/geography: The museum staff writes the clues. Knowing historical routes into town is key. Also, polish up on names, places and cardinal directions. "Read into" clues: Clues refer to history and locations, but watch out for double meanings.Backtrack: Re-read past clues � you may find a nemeaning and/or that you're in thewrong part of town.Use the Internet: Google for meanings of clues, read past articles about the log, anduse online maps.Use local research facilities: The museum's research library gets busy come Yule Logtime. Stroll through its exhibits to brush up on local lore. Check out books on local history.Look in ALL directions: Some of the clues (and the log itself) have been missed simplybecause seekers did not look up or down.Go with your gut: Several hunters agree, folloyour hunch.Yule Log etiquette: Team up with fellohunters if you're in the same spot at the sametime. If and when you find it, call the museum so others aren't left out in the cold.Have fun: Remember this 30-year community tradition is a fun way to learn more about ourtown.

Two Bartenders Two Holiday Drinks - 'Tis the season to be jolly. To give you a jump on the game, we asked two of Steamboat's favorite bartenders to showcase their favorite holiday concoctionsNEW FOR THIS YEAR at the COttonwood Grill is the Candy Cane Cocktail ($12), whipped up by bartender Cesar Cruz III, 35. "It's a great, Christmassy holiday drink," he says. "It's nice and refreshing ... like drinking a fresh Steamboat powder day." Admitting that it's a bit on the girlie side, he says the shredded white chocolate on the rim ("like fresh fallen snow") and candy cane accoutrement give it its flair.Candy Cane Cocktail:1 1/2 oz. vanilla vodka1 1/2 oz. white chocolate liquor3/4 oz. peppermint schnappsShake well with ice and strain into chilled martini glass. Garnish glass with shaved white chocolate rim and a candy cane.TEN-YEAR CAFE DIVA bartender Kirsten Bergquist-Alder, 36, calls the Eskimo Pie ($8, $11 Grey Goose) 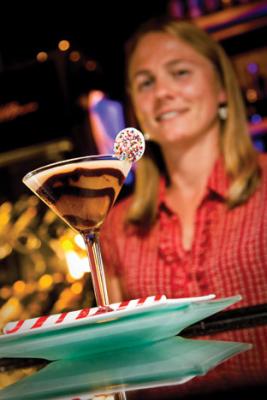 Photo by Corey Kopischke. a classic holiday drink. "It's been on our menu since the dawn of Diva 11 years ago," she says of the martini invented by the restaurant owner Paul Underwood. "Whenever someone asks for something special, that's one of the drinks i recommend. It's slightly sweet, with a dash of mint and a little bit of everyone's favorite - chocolate."Eskimo Pie:2 oz. vodka1/2 oz. Baily's Irish Cream2 splashes white creme de cocoa1 splash Rumple MinzeShake vigorously with ice and strain into chilled martini glass, striped with chocolate spiral. Garnish with peppermint stick.