Tales from the 10th Tales from the 10th

by Kelly Bastone Photos courtesy of the Tread of Pioneers Museum

Skiing and climbing are playful adventures for most Steamboaters, though after a day spent plundering powder or reaching a summit we might insist that our very lives depend on those mountain pursuits.    But for the troops of the 10th Mountain Division, the nation's first-ever military unit trained specifically for mountain combat, such a statement was no hyperbole. Skiing, hiking, climbing and enduring bitter mountain winters truly became matters of life and death during World War II combat.    And in fact, they still are: the 10th Mountain Division is active in Iraq and 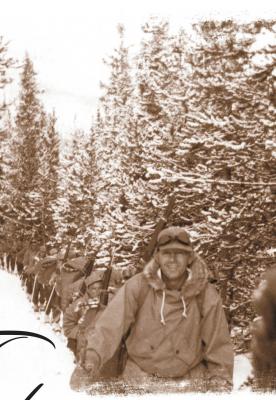 10th Mountain Division troops make their way through the backcountry while training near the Tennesse Pass.Afghanistan, dispatched there in 2003 as part of the U.S. war on terrorism. The 10th's presence in today's wars is just one part of its far-reaching legacy � one that extended far beyond World War II and impacted even Steamboat Springs.    Northwest Colorado didn't escape the inexorable tug of World War II. In the early 1940s, area ranchers, miners and businessmen filed into Steamboat and lined up to meet with the draft board. The late Gordon "Gordy" Wren was one of them. The town's top skier and the first American jumper to break the 300-foot mark, Gordy earned a spot on the U.S. Nordic team and qualified for the 1944 Winter Games. But his Olympic hopes were dashed when the war cancelled the competitions. So when military service seemed imminent, he volunteered for the fledgling 10th Mountain Division.    The brainchild of Charles Minot "Minnie" Dole, who created the National Ski Patrol, the 10th Mountain Division was founded in 1943 when the 87th Mountain Infantry Regiment (knownas "Minnie's Ski Troops" and stationed at Fort Lewis, Wash., since 1941) combined with the 86th and 85th Regiments at Camp Hale. Applications for the all-volunteer unit required three letters of recommendation substantiating each applicant's mountain skills and experience.    Maybe it was the recruits' seemingly glamorous outdoor expertise, or the fame they later earned worldwide among troops who tagged them as an "elite" unit, but even from its inception, the 10th Mountain Division possessed a palpable cachet. "A lot of guys thought the 10th Mountain Division was kind of thrilling," Gordy told Three Wire Winter in 1980. "It was the place to be if you were going to be in the infantry."    "I was inducted into the service with a bunch of guys from Steamboat," Gordy recalled. "We picked up a gang of guys in Oak Creek and all rode the railroad to Fort Logan together.Then we were divided into four groups � there were probably 600 men there, and I ended up the only guy in group 4 because I was the only one going to the ski troops in Fort Lewis, Wash. I took my basic training at Fort Lewis and then went to Camp Hale, Colo., and stayed there for over a year."    Camp Hale, a high valley southeast of Leadville that's nolisted on the National Register of Historic Places, was where troops honed their skills in skiing, mountaineering, snocampingand mule skinning (loading munitions on mules). And along with Gordy, Steamboater Marvin Elkins was also stationed there. The two of them took advantage of Camp Hale's close proximity to Steamboat (a 2 1/2 hour drive) by bringing Army friends home on the weekends. "I would bring a car or two full of GIshome on a Friday night pass," Gordy told Three Wire Winter. "My aunt and uncle would slaughter a bunch of chickens for us; that was the greatest!"    The troops also poured into Steamboat to participate in Winter Carnival. "We had guys in our outfit so that made ski carnival just something else. It was practically loaded with 10th Mountain Division guys," Gordy recalled. "Steamboat was not only a place for me, but guys in thedivision who had cars came because it was a ski town and a place they liked. Steamboat became a very popular place for the 10th Mountain Division. I think that was important." 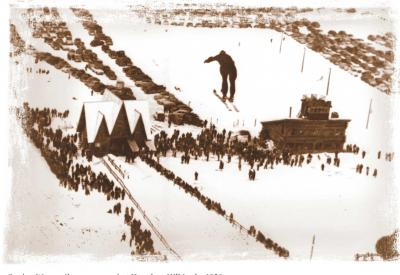 Gordon Wren sails over a crowd at Howelsen Hill in the 1950's.As for area rancher Margaret Squire, the troops' visits changed her life forever: One of those visiting GIs was Charles Hogue of Pennsylvania, whom Margaret married after the war in 1947. "I met Chuck at a dance at the Mesa Schoolhouse," she recalls. "He was very handsome and a verygood dancer. And he wrote to me every day," Margaret says.    Chuck wrote many of those letters from Europe, because the Camp Hale training days didn't last forever; eventually, various members of the 10th received their orders and shipped outfor Europe. As a ski instructor, Gordy Wren was never in a combat troop. Instead, he explained in Three Wire Winter, "I taught a lot of the guys hoto get to places where they were needed, and then I hoped it did some good." In Italy, Gordytaught skiing to South Americans, South Africans and the British; he was even given Mussolini's skis by a British soldier who'd acquired them when Allied forces invaded Turin.    Charles Hogue, however, saplenty of combat, medals that included the Purple Heart, the Good Conduct Medal and the Bronze Star. He wasn't the only member of the 10th to become highly decorated because the unit as a whole displayed outstanding valor during especially dangerousmissions. They were charged with taking German-occupied Mount Belvedere, which blocked supply routes through Italy's Appenine Mountains. Its capture had three times eluded Allied forces. But in February 1945, division troops climbed 1,500 vertical feet and assaulted Riva Ridge under cover of darkness, securing the approach that allowed them to successfully take Mount Belvedere. By April 1945, the 10th Fifth Army's drive up the Po Valley.    After the war, Charles married Margaret and worked their ranch near Steamboat. Other veterans of the 10th also relocated to the Yampa Valley: German-born Rudi Schnackenberg, whoearned the Silver Star, the Bronze Star and the Purple Heart during his service as a 10th Mountain Division combat medic, became a Steamboat ski school instructor and supervisor from 1967-1985. Rudi helped develop such famous skiers as Loris Werner, Jon Elliot, Jim "Moose" Barrows, Jere Elliot, Chris McNeil, Jeff Davis and Lonny Vanatta; after his death in 1985, Rudi's Run, near the Priest Creek lift, wasnamed for him. Paul Stettner, an expert climber and veteran of the 10th, moved to Routt County from Chicago after retiring in 1973. And native Pennsylvanian Bob Krear also called Steamboat home after the war.    Gordy, meanwhile, chased a different dream: the Olympics. He qualified for the1948 Winter Games in St. Moritz, where he placed fifth in special jumping. He then returned to the Yampa Valley and managed the Howelsen Hill ski area, coaching young skiers like Buddy and SkeeterWerner, who would themselves become Olympic athletes. Instead of insisting on strict military discipline, Gordy emphasized fun. "Gordy made everything into a game," Skeeter recalled during a taped interviein the collection of the Tread of Pioneers Museum.    Like several other veterans of the 10th Mountain Division, Gordy exerted a strong influence on America's nascent ski industry. Aspen, Vail and Arapahoe Basin were all founded or furthered by 10th Mountain Division veterans; for his part, Gordy served as director/manager at theLoveland Basin and Jackson Hole ski areas before helping Jim Temple create the Steamboat ski resort.    From 1956 through 1958, Jim surveyed potential ski terrain on Storm Mountain, and Marvin Elkins was one of the snowcat drivers on those initial forays. Jim and Gordy named the Four Points area after the four-point buck they spotted while searching for an upper terminal site for the chair lift. After the ski area opened, from 1967-1970, Gordy served as Steamboat's mountain manager. Wellafter the war ended, the 10th Mountain Division's World War II veterans continued to shape Steamboat's mountain sports � most notably skiing.    Feof those veterans are alive today, but their impact continues to be felt inSteamboat and beyond. Those extraordinarily gifted mountain men lent their talents � and their lives � to America in war and in peace, and the benefits were far-reaching. Not only did they help defeat Hitler, they helped create the ski traditions we preserve every time we cheer the jumpers on Howelsen Hill or part the powder caches on Rudi's Run.
Article Gallery [2 Images] Click Any Image To Expand