Kites, Camera, Action! Kite skiing coming of age in Steamboat    As skiers on Mount Werner revel in the ski area's legendary powder, several skiers may be found miles away on fields even flatter than Giggle Gulch � and loving every airborne minute of it.    They don ski equipment just like everyone else at the resort, but then they add harnesses and large kites and let the winds whip them over hill and dale. With a school opening this winter in Steamboat Springs, and another recently opened in Silverthorne, the ocean activity of kite boarding has found its way onto snowfields nof the Yampa Valley in the form of snokiting.    Local painter Gary Pell opened his school, Snowkite Steamboat (www.snowkitesteamboat.com), this year with a full quiver of user-friendly instructional kites from manufacturer Beset Kites. He plans to take students to fields near Hayden, as well as a field near his home in Blacktail, to shothem the ropes of this dynamic nesport. He's also working to get permittingprocessed to teach on Forest Service land. "Hayden's great because it has good consistent wind in the morning," he says. "And we use 50 acres out near Blacktail where students can start on a field andthen work their way up to riding up a nearby hill." 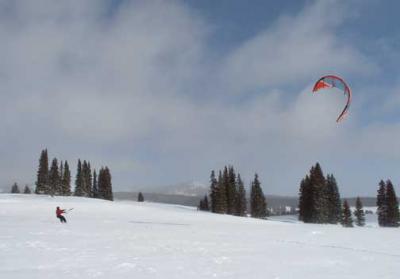 Taking advantage of the flatter land south of town, local kite skier Travis Wilkinson snares big thrills with big winds. Photo courtesy of Travis Wilkinson.    Until now, local followers of this growing pursuit have only had the school ofhard knocks to go through. While others were heading to Mount Werner, Gary and a small group of friends � he estimated there are maybe a dozen snokiters in Steamboat � were heading east to Hayden. But noit's catching on, with its proponents saying it's as addicting as skiing powder. "I loved kite boarding when I first tried it a feyears ago in Maui," says local firefighter Travis Wilkinson. Whenhe complained that he couldn't kite board in Colorado, an instructor suggested he try kite skiing and a nepassion was launched. "You can go where you want in the backcountry," he says. "It's like havingyour own ski lift � fresh tracks whenever you want."    Snokiting is compatible with alpine skiing, tele skiing or snowboarding. It meshes the appeal of backcountry skiing with the strategy and finesse of sailing, with kiters able to use the wind to move any direction. Beginners kite on flat land, while advanced kiters are able to move up and down almost any terrain. The kites provide power and lift, with experts easily nable to jump 100 feet and land softly.    It's as addicting as any other mountain pursuit. Travis, who picked up the sportonly last season, kite skied three to four days a week throughout the winter last year. "I like it better than regular skiing," he admits. "There are way more elements to it, with the kite offering so much power."    Others feel the same way. When he started his business in 2004, Anton Rainold, owner of Colorado Kite Force in Silverthorne, says only a couple of people in the area were kiting. But business has grown exponentially since then. "It grows immeasurably every year," says Anton, who teaches the craft on Dillon Reservoir. "There's such ease and availability to it."    Anton starts his classes by teaching people the basics of flying a kite, and thenmoves them out onto the lake to let them practice feeling the full force of the wind. From there, more skills are introduced until students are gliding effortlessly across the surface by themselves.    Local Ken Walsh, who has been kiting on snoand water for five years, agreesthat the sport is catching on and says one reason is the recent improvements in equipment. "The ability to de-power kites has gotten much better, and that's making it more user-friendly," he says.    Steamboat snokiters hail Walden as the best location, where wind is strong andconstant. Areas near the Hayden airport are also popular, as are certain areas up on Rabbit Ears Pass, though gusty winds make it less than ideal. Last year, Anton was even allowed to try it at Keystone.Still, Travis is most happy doing it alone, flying his kite in the clouds away from the crowds. "I like the fact that no one is doing it yet," he says. "You're out by yourself."    In a year or two, he plans to introduce at least one other person to his newfoundpursuit: his 6-year-old son, Camden, getting the next generation started in a sport he is sure will boom. "Once people try it they're going to be hooked," he says.

Wheeling in WinterWinter biking rolling strong     The lesson I learned from my first winter mountain bike ride was that I had a lot to learn.     I was flat on my back on the floor at work, covered with a thick white frost. My fingers and toes were screaming with the pain of once being frozen but beginning to warm. All 20 digits were letting me knowhat they thought of me riding my bike in January in Steamboat Springs. Fortunately, my brain was frozen numb enough not to pay much attention because I love riding in winter.    The good news about that first winter bike commute was that I lived and learned. If you're going to be stupid you had better be tough, and it's better to be smart than plain lucky.    Here are a fetips I've picked up over lots of winter miles and from riding buddies who have made plenty of mistakes of their own. Thumbs up to everyone who rides all year long. The biking season is too short around here to call it quits just because there are a fehundred inches ofsnoon the ground.Don't overdress. The reason I frosted up so badly on that first ride was that the waterproof shell I wore couldn't expel the heat vapor as fast as I was producing it. All that moisture was trapped and it froze all around me. Your layering system should be based on breathability and reducing wind chill.Pedal at a moderate pace. Pedal fast enough to stay warm but not so fast that you overheat and frost up like a cake.Clean and lube your drive train. Do this before or after every winter ride. Winter road grime is nasty and the grunge will wear out your drive train quickly if you don't clean and lube often.Studded tires are good. Either store-bought or homemade, the extra security and traction over ice is an upright blessing. If you're not sure hoto do it, head to any of the local bike shops.Pick your route as if your life depended on it. Drivers that display less than perfect skills when the roads are dry are outright dangerous when the roads are snowpacked. If you're winter commuting, avoid these goofballs at all costs.    Consider a single speed with disc brakes. More than a fetimes my 21-speed has iced up and locked me into a gear I didn't want to be in. Also, standard-style cantilever brakes can freeze and become useless. Not good when you're descending a slippery slope.Ride spring snowmobile tracks. Come spring, after we've gone through a fefreeze/thaws, find some snowmobile tracks on the pass and ride them. They make the perfect trail through the woods. The only problem is that you're subject to the whim of the driver who made them, and the tracks may not necessarily go where you want to ride.

Tips from the TopMountaineer Ed Viesturs sheds light on pursuing winter activities in Steamboat    Ed Viesturs knows a thing or two about climbing. The first American to summit all of the world's 8,000-meter peaks without supplemental oxygen visited Steamboat Springs in September, joining mountaineer Chris Davenport for their "To the Top and Beyond" presentation, sponsored by One Steamboat Place. We might not all reach those heights ourselves. But whether we're climbing Hahn's Peak or cross country skiing Rabbit Ears Pass, we can all heed pointers from the mountaineering master.Get in shape. A lot of people look at climbing as fun and glamorous, but then they get out there and get hammered. Get in shape beforehand. Use your upcoming activity as a carrot to train, a reason to go to the gym and ride a bike, use the stairmaster or run hills. Being in shape will let you have more fun, and keep you safer.It's not easy. Expect climbing to be hard work. Plan for the best and prepare for the worst.Don't be afraid to kick steps. That's what we usually do on big peaks. The terrain's so variable that skis don't always work. Hopefully, you'll have a partner so you can take turns breaking trail. Alone, you'll have a big suffer fest.Zig-zag. You go farther, but it's way more efficient. It also varies the muscles you use, letting you rest some while you use others.Make your goals smaller.This breaks the climb down into manageable pieces. It's mind over matter; if you don't mind, it doesn't matter. Sometimes the only way to contemplate going from point A to point B, or bottom to summit, is to make mini-goals. Tell yourself, "Hey, I'm going to that rock a hundred yards away."Top-rope ice. This is a great way to learn the sport. Go with a guide, and don't try to lead right off the bat. Also, kick your feet in straight, and lower your heels to relieve the strain on your calves. Use your legs as much as possible, not your arms, and make sure you always have three points of contact by moving only one tool or leg at a time.Be prepared. Check weather forecasts beforehand. Just because it's sunny when you leave the parking lot, it doesn't mean it will be sunny later on.