Mountain ManicuristSki Corp.'s director of slope maintenance David Crisler    Moving a mountain isn't for everyone, but someone has to do it. That's where the expertise of the Steamboat Ski & Resort Corp.'s "Mountain Manicurists" come in, led by 40-year SkiCorp. veteran David Crisler, 58, the longestrunning employee at the mountain.    You may not meet up with David on the mountain, but you'll notice his workas director of slope maintenance every time you click into your bindings. Making, grooming and molding snow, clearing brush, removing trees, grading and re-grading � it's all part of the job.     "It is an art," David says. "We do everything we can to be the caretakers of the mountain."    Acknowledging that no two seasons are the same, David says the best part of 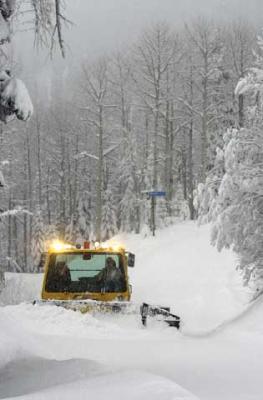 Geared to Groom: David Crisler packing out another trail. Photo courtesy of Larry Pierce.the job is the challenges it entails. Last year his team literally moved a mountain, re-grading Headwall at the resort's base. "We moved 300,000 yards of dirt, and it seems like we moved it several times,"David says. Nothe front face is prime beginner terrain.    Another adventure is building the terrain park, which he admits they get betterat every year. To open the 500-foot Olympic-size half-pipe, crews work 18 hours a day for a week straight, with David, a former Gelandesprung jumper and ski racer, testing the final product. Then there's the never-ending early season snowmaking, which he says is "a cold, wet job. "It takes a special person, and we don't get many compliments," he says.    David moved to Steamboat Springs with his family in 1962 when he was in sixth grade. He began his 40-year career at Ski Corp. cutting such trails as Buddy's, White Out and Hurricane. Later he worked for ski patrol before moving to mountain operations. He met his wife, physical therapist Marti Irish, working on the mountain while she was head blaster and also on the brush crew.    So what do you get a guy for his 40th anniversary? "We're getting a 24-foot-wide,500-horse BR500 Super Cat," he says about the powerful machine that will help his cremeticulously groom the slopes. "It fits in the shop with three inches on each side. And the thing moves. You put yourfoot down and it's like a shuttle taking off." Hopefully we won't see scorch marks on the corduroy.All in a Day's WorkBehind the scenes with Ski Patrol Director John Kohnke    Cafeteria food fights and animal rescue operations; who do you call? Ski patrol, of course.    Steamboat Ski & Resort Corp. Ski Patrol Director John Kohnke says he sometimesfeels like a mother hen trying to keep everyone safe on the mountain. "When you're having the best time ever, sometimes people's good times can clash," he says.    That's when the patrol steps in, even if it means intervening between familiesvying for the same cafeteria table.    "In the old days patrollers needed one skill set � ski and do first aid. You didn't need to talk to people," says the 57-year-old, who started at the resort in 1976. "Now, you need emotional intelligence as well."    While training still includes the basics � rope skills, lift evacuation, accident investigation and snosafety � it also incorporates special skills like verbal judo. "It's designed to defuse conflicts by asking questions and listening," John says. "It's very Zen-like, absorbing negative energyrather than escalating the situation. It gives people the choice to cooperate."    That's not always easy, especially when telling the mother of two teenagers who are lost that safety requires postponing a search until morning; or informing family members about a fatality, which happened twice last year.    But the rewards come in unexpected ways. Like the time some cross countryskiers requested a snowmobile to bring feed to a horse stranded in the backcountry. A team of patrollers and a local veterinarian took a snowcat to rescue the animal.    Growing up in the "gray climate of NeYork," John delighted in the annual ##image3-right-At Your Service: Ski Patrol Director John Kohnke preparing for another day on the slopes. Photo by Corey Kopischke.##Warren Miller movies where the skies were always blue and it snowed every night. He first heard about Steamboat while watching Moose Barrows in the Olympics. "The name sounded cool and the sport looked cool," he recalls. So he followed a friend there. Spotting a copy of his hometown newspaper in a trash can, he knehe was in the right place.    A patroller's day starts at 5:30 a.m., well before the sun is up. "A commonmisnomer is that we're skiing off the powder, but there's a lot of work to do," John says, admitting that being up there alone in the morning and late afternoon is a highlight of the job.    Other rewards are all in a day's work. "One woman who felt like we saved herhusband wrote a beautiful letter about what it meant to spend a feextra years him," says John, happily married to his wife, Carol.    Letting his inner ski bum shine through, John says he wants to make sure people have the best time ever on the mountain, even while heading toward less tolerance for bad behavior. "It all goes back to this," he says. "Skiing is by far the best respite from daily life � it's one of thegreatest things you can do."
Article Gallery [1 Image] Click Any Image To Expand