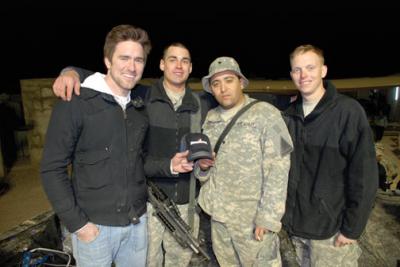 And it’s rarely to celebrate a landscape like the lush Yampa Valley, far removed from the desert. Nevertheless, that’s what happened this spring when Christian Schauf, lead guitarist for the band Catchpenny, brought his Steamboat-logo’d guitar over to the war zone for soldiers to sign.    “I’ve been coming to Steamboat over the past four years and have fallen in love with the place,” he says. “I’ve met some great people at the resort, and they’ve always been supportive of our efforts overseas. So I thought it’d be cool to have everyone sign one of my guitars with the big Steamboat logo on it and then give it to the resort to display.”    Ski Corp. officials appreciate the gesture and goodwill. “Christian and the band’s efforts to entertain troops in Iraq is remarkable,” says Ski Corp. spokesman Mike Lane. “We’re proud to be associated with them and their efforts to bring a little bit of home to those thousands of miles away in hostile environments and ensure our troops knowe’re all thinking of them.”    As for where the resort plans to display the musical heirloom, it’s currently assessing its options. “Since there are signatures all over the guitar, we’ll have to find a way to mount it so folks can see all sides,” Mike adds.    Catchpenny is playing more than 150 shows this year in Iraq in support of Operation Iraqi Freedom. It was also recently named Armed Forces Entertainers of the Year for its efforts. “At a shoearlier this year, we took two sweet chopper rides and got to drive some Abrams tanks around in the desert,” says Christian. “Homany people can say they got to do that?”    With two albums under its belt already (From Where You Are and Chance for a Lifetime), the band is working on its third release this summer, to be produced with help from Michael Bland of Prince, Soul Asylum and Dixie Chicks fame.Ridn4Warriors bucks into Romick Arena    At this year's Fourth of July Rodeo at Romick Arena, spectators sasomething a bitdifferent from the usual crop of cowboys and clowns.    Six junior bull riders, representing the different branches of the country's armed forces � Army, Navy, Air Force, Marines, Coast Guard and Veteran Affairs � participated in a new"Ridn4Warriors" program. 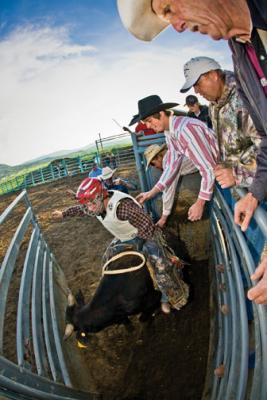 Giddy-up: Casey Barnes, the youngest junior on this year's team, straddles his bull in preparation for this summer's showdown.    The brainchild of local Rob Powers, the program was designed to pay homage to our nation's troops while giving junior riders in the area a chance to compete in front of a crowd. Wearing logos designating the different branches of service, the riders did so diligently, even borrowing a page from cowboy poetry by reading a story about a soldier to the audience before hopping on their bulls.    To prepare for the event, two practice sessions were staged this spring at the UrieRanch off Elk River Road, where juniors practiced both their reading and riding. "Rob told us about his idea and hoit'd be good for the community and armed forces, so we gladly hopped aboard," says Guy Urie, whose company, Tuff E Nuff, provided the rodeo stock for the event.     After the practice sessions, it was on to the main event, where the juniors rode in front of a grandstand full of spectators while raising awareness for our nation's troops. And Rob made sure that as well as raucous applause, the riders also received U.S. savings bonds for their efforts.A NeLook for Lincoln    Lincoln Avenue is getting a nelook, thanks to street design changes that will begin this fall.    After Labor Day, construction crews will repave downtown's main street usingconcrete rather than asphalt. Though more expensive, concrete will last 30 years before needing to be replaced, while asphalt lasts only seven to 10. "With the amount of traffic we have, they decided it's more important to have it last longer," says Tracy Barnett, manager of Mainstreet Steamboat.    The Lincoln revamp will also move bus stops "downstream" of traffic lights, so thatbuses can move into the street more easily, and will add covered stations so passengers can wait out the weather. As well, sidewalks will bump out at corners to reduce street cross time, colored cement will designate crosswalks to cut down on repainting, and nefiberoptics will better time lights to change with traffic float different times of the day. The city will be adding a nestoplight at 11th Street to slotraffic and provide a pedestrian crossing to stores and restaurants.    Though the state originally said the city would have to move the Ninth Street stoplight if it wanted to add a neone, city planners eventually convinced the state otherwise. "The Ninth Street light is important, especially for pedestrians," Tracy says.    This fall, construction will tackle the intersections at Third and 13th streets, where drainage issues are most complicated. Construction will stop for the winter, resume in the spring, pause again for the July and August high season, and finish in the fall of 2010. "Hopefully there won't be much traffic," says Tracy, adding that reduced tourism could make the process less disruptive. 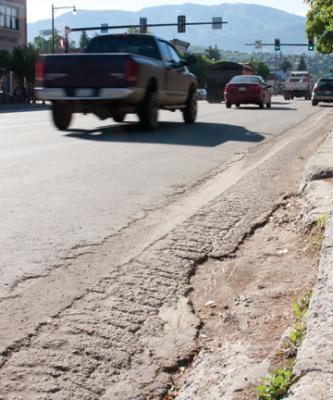 Pavement Improvement: Starting on Labor Day, Lincoln Avenue will recieve a coating of concrete. Photo by Ken Wright.    Since Lincoln Avenue is also U.S. 40, the Colorado Department of Transportation will foot the $11.8 million bill of repaving, with the city paying an estimated $2.1 million for gutter and sidewalk reconstruction.Steamboat Unbridled Trotting Along    The recession isn't stopping the Steamboat Unbridled revitalization efforts at the base of the ski area, with construction beginning as soon as this fall.    The Urban Renewal Authority Advisory Committee received a green light to proceedwith its base area projects: The promenade � a 20-foot-wide pathway connecting the old Thunderhead site to Ptarmigan; and Burgess Creek Daylight � uncovering the stream from Slopeside to Après Ski Way. "The Steamboat base area will be a real summer destination," says URAAC Co-Chair Steve Frasier. "Even locals will use it."    The city issued a municipal bond to proceed with construction on the promenade, with URAAC slated to begin construction on it this August. Another project is the redevelopment of Ski Time Square and Thunderhead Lodge. After City Council approval in May, owners say the economy hasn't changed their plans and that Ritz-Carlton has signed a letter of intent to operate the hotel. "With prime locations, both developments have enduring value," says Mark Mathews, vice president of The Atira Group, which purchased both properties for $54 million in April 2007. "At this time we're monitoring the market. Construction will begin when pre-sale financing requirements are met."    The developers envision a vibrant base village resort environment with a livelystreetscape, ski-in/ski-out access and public gathering places. "We look forward to a speedy and sound economic recovery," Mark says. "With a world-class ski mountain, the investment in public improvements and neprivate development, the Steamboat base area is poised for greatness."    The proposed five-star, mixed-use development consists of wholly and fractionallyowned condos, shopping and dining and plentiful amenities. The 390,112-square-foot buildings will offer ablend of mountain- and modern-style buildings characterized by natural materials, articulated rooflines, extensive glass, and green building practices. "Sustainable development is the right thing to do," Mark says of the LEED Silver status they're pursuing for the Thunderhead project. "It's good for the environment, good for occupants and responsive to today's market."'Boat' Bits    In Ski Town USA, it's important to honor those who keep our mountain running. In May, lift mechanic Frank Findler was named Mechanic of the Year by the Rocky Mountain Lift Association."Frank's strengths make him a role model for our team," says Kurt Castor, director of lift maintenance.    Soda Creek school teacher Laura LeBrun is learning homuch her students like her creative classroom style. The second-grade teacher received the Steamboat Springs School District Teacher of the Year award this spring, making her eligible for the Colorado Board of Education Teacher of the Year.    In April, Steamboat photographer Jim Steinberg's book, Colorado Scenic Byways: Taking the Other Road, became a finalist for a 2009 Colorado Book Award, as well as for ForeWord Magazine's Book of the Year. The book displays Jim's pictures of the classic Colorado open road.    The U.S. Ski and Snowboard Association in May bestowed Athlete of the Year accolades on two locals, naming Todd Lodwick its Nordic Combined Athlete of the Year and former Steamboat Springs Winter Sports Club athlete Ryan St. Onge as its Freestyle Athlete of the Year. Todd won two golds at the World Championships in Liberec, Czech Republic; and Ryan won the World Championships in aerials.    Oh, to be Kip Tirone. On June 3, during the annual YES golf tournament at the Rollingstone Golf Club, Kip hit a hole-inone on the 322-yard, par-4 ninth hole. "It doglegs right, so I cut the angle and hit it with every bit of my driver," he says. "My spotter said it hit the green about 30 feet in front of the hole." It gets better. Last October, Kip nailed another hole-in-one on the 145-yard, par-3 12th hole at Haymaker. "That's two in two months of golfing," says Kip, who took the liberty of absconding with the hole's flag at Rollingstone, and escaped the obligatory drink-buying thanks to the tournament-supplied keg. "I'll probably never get another."    This spring, the entrepreneurial support group Edward Lowe Foundation named Steamboat companies Big Agnes and Boa Technology among the top 50 "Colorado Companies to Watch."
Article Gallery [3 Images] Click Any Image To Expand