Nestled among the aspen Nestled among the aspen

Susse Budde’s log cabin-in-thewoods is anything but. From the outside it looks like the standard rustic Colorado getaway, but step inside and it’s pure California. With a clever mix of old and new, this transplant actress from L.A. has transformed what was once a primitive mountain cabin’s 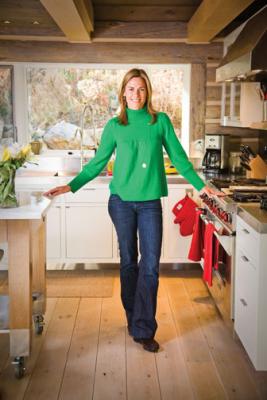 White cabinets, a Corona marble island and modern appliances bring a does of SoCal to Susse's Steamboat home. Photo by Corey Kopischke. interior into a chic, modern flat you’d expect to find in a trendy beach town.   “People were like, ‘What are you doing?’ when I told them I wanted the California lifestyle in my Colorado cabin,” Susse says. “I flattened the hillside, made a wall of windows and brought the outside in. It’s the California lifestyle with a parka.”    Susse, whose acting credits include Lost, NCIS and Two and a Half Men, and movies including 3000 Miles to Graceland, Clover Field and the neStar Trek, came to Steamboat Springs with a group of movie-making friends during the 2005 writers’ strike in California. “We needed a break and got invited to Steamboat by some friends,” she says. “I fell in love and decided it was a place I had to invest in.”    While on a drive to the Strawberry Park Hot Springs, one of her friends spotted reindeer a landowner was raising near what is noher cabin. “My friend jumped out of the car to check them out and that’s when we sathe “For sale by owner” sign on the cabin,” she says.    “It was all I could think about from that point on.”     “Transforming an old 1800s cabin into a modern-day pad proved to be a bitmore than Susse expected. Even with a remodeling background that began when she was 25 � she started designing interiors as a side job from acting � "everything that could go wrong, went wrong," she says. And since construction began during the 2006 building craze, she was left to fend for herself. "Everybody was booked, so I ended up being in charge," she says. 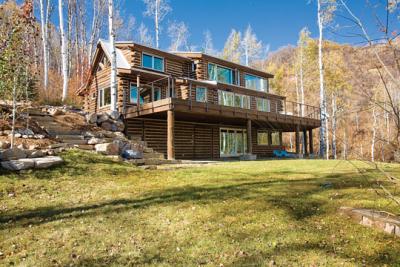 Photo by Corey Kopischke."When we knocked down the first wall and saa thousand mice and a bunch of chewed up wires, I kneit was going to be more than just a $100,000 remodel.    “"It was definitely a learning process," she adds. "Some things had to be done more than once, a feeven had to be done more than twice." That included the huge deck that runs the length of the house, overlooking a lush yard filled with aspen. "We had to do the deck three times," she says. "It kept leaking. So while I was up to my knees in mud with work trucks stuck in my driveway, I'd talk to friends in California who were walking the red carpet at movie premieres and hitting the A-list parties," Susse says. "It got frustrating at times." But her commitment and design talent paid off.    “When you walk in the front door, it's the contrast from rustic log exterior to fresh modern interior that catches you off guard. The ultra contemporary kitchen � with a bit of European Danish influence thrown in � has white cabinetry with stainless steel counter tops and sinks, along withone killer faucet. A movable custom island topped with Corona marble and set on big steel wheels is parked in the middle of the room, and top-of-the-league appliances command every counter.    “But what really completes the place are the funky, unique light fixtures � some store-bought, others designed by Susse � scattered throughout the home. "If I couldn't find what I 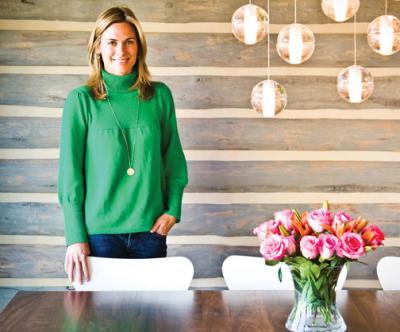 Whether they resemble urchins or snowflakes, Susse's light fixtures are a conerstone of her cabin. Photo by Corey Kopischke.was looking for, I'd create it," Susse says. Three such lights hang from a loft above the kitchen, andlook like giant snowflakes. "I actually got those in San Francisco," she says. "They're supposed to be sea urchins, but here they're snowflakes."    “Because Susse remodeled the home with the help of her parents, who are both from Europe, she added on to the cabin to create two master bedrooms, one on the upper level and one on the lower level (that way they wouldn't argue about who gets the master), as well as a third loft bedroom that was part of the original cabin. "My neighbors say that the original cabin, which was a tiny box, was hauled here on a trailer from just down the road," says Susse. "A local family bought it and added on to the original and lived here for 15 years or so, and then I bought it and added on my addition."    “Each master bedroom has huge windows looking out onto the aspens, making artwork unnecessary. "There's no place to hang anything," Susse says. "It's all glass." Both masters have wallpaper, an aspen forest in the lower level suite and lily pads upstairs, which adds asubtle, modern feel while reflecting the surrounding landscape. And if you'd be shy about taking a bath in front of two large windows, you'd change your mind once you sathe deep freestanding stainlesssteel tub in the upper level suite, which comes with expansive forest views.    “The use of glass tile adds color to a mostly white pallet, including wall-to-ceiling tiles in the baths and a glass fireplace mantel that pops out in the white living room. That sense of style continues throughout the 3,000-square-foot cabin, creating a California style all its own.    “Susse's keen sense of design has not gone unnoticed. Word has spread about her talents and she was recently hired to help with designs in two Steamboat homes. She hopes to soon join forces with contractor boyfriend, Cory Larson, to create a design/construction team. Butwhen reflecting on her achievements, she remains humble, no doubt something she brought from her days in Hollywood to her nehome. "Forget about what I've done," she says. "It's not about what's inside the cabin. Just look outside, that's what it's about. This spot is so magical."