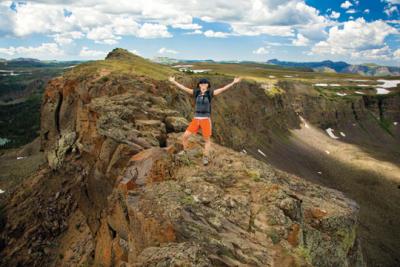 Mike Benedick lorded over his main street Yampa saloon with strict rules and a feisty tongue. For half of the 20th century, the only South Routt adventure more daunting than hiking across Devil’s Causeway in the Flat Tops Wilderness was walking across Mike’s Antler’s Café & Bar with a beer in your hand. As fast as you’d find your feet, the crotchety Prohibition-era owner would hurl an insult that sent you scrambling for a seat beneath cross-species taxidermy.    Mike died in 2003, so these days you’ll have to go down the street to the Royal Hotel for the traditional post-Causeway-crossing brew. But once again Devil’s Causeway reigns as Northwest Colorado’s most nervewrenching traverse – where cowboys are rumored to have once blindfolded their horses to usher them across.    Officially called an arête, Devil’s Causeway is nature’s own 50-foot-long, four-foot-wide basalt bridge that provides a tenuous link between two 12,000-foot plateaus. Glacier-etched slopes plummet more than 1,000 feet on either side, providing for staggering views and high entertainment as hikers in various stages of vertigo struggle to crawl, scoot or scramble across the crumbling ridge. Teetering across with a full pack feels positively treacherous.    More than half of the steep, threemile hike to Devil’s Causeway is above timberline, and the crossing itself sits at 11,800 feet. You’re likely to pass a felingering snowfields even in late summer, which is why wildflowers stick around so late. The panoramic vistas over the 235,000-acre wilderness area are almost as mind-tingling as the Causeway itself.    Day hikers can make a memorable sixmile trudge up, over and double-back on Trail 1119; or take a longer 10-mile loop up and over on Trail 1119 with a loop around the other side (thereby averting a second Devil’s Causeway crossing) along Trail 1120. But the best reason to trip your adrenaline trigger and make the crossing is the mix of mesa-top and deep forested trails that crisscross this roadless wilderness area.    You can also make it a multi-day outing, as many of the longer hikes on the other side of the Causeway can be loops. Along the way, you’ll lounge around pristine alpine lakes sporting endless campsites, and catch trout among the wildflowers for dinner. While you’ll undoubtedly experience a thunderstorm or two as they roll across the Flat Tops, think of the fierce cracks like Mike hurling orders from his bar in the sky – always the perfect way to end a day on Devil’s Causeway.On Your Rehder    Henry and Helen Rehder watched over vast changes in Pleasant Valley during their lives. Agriculture slowed. A thick grayling fish population disappeared. Lake Catamount flooded the meandering Yampa River. And dreams for a massive ski area came and went.    Tucked away on their secluded 250- acre sheep ranch enveloping virtually all of Harrison Creek, Henry and Helen largely kept to themselves during the long public brouhaha. But when developers came knocking, the couple swore that no one would ever scare them off their land.    The Rehders took that promise to their graves. 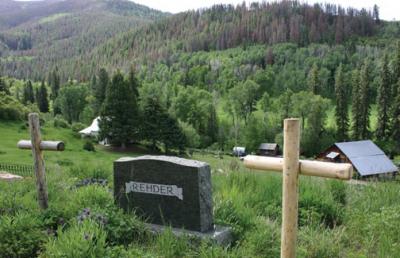 The gravesite of Henry and Helen Rehder. Photo by Jennie Lay    Henry died in 1998. Helen died in 2004. True to their word, they're not only buried together in a plot that overlooks their home, Harrison Creek and an overgrown rhubarb patch � but theyensured that their beloved land would forever remain a nature preserve. Yampa Valley Land Trust noowns the Rehder ranch and The Nature Conservancy holds a conservation easement that prohibits development. In accordance with Helen's last wishes, the ranch will be a refuge for studying wildlife, ecosystems and the interpretation of its natural environment through art.    As a young man, Henry bought the ranch from an uncle who homesteaded it around 1900. Helen, a lifelong artist and history buff, fell in love with the landscape while keeping her eyes on the dirt and its incessant supply of arrowheads and artifacts. They once unearthed a 13,000-year-old Clovis point in a three-foot corner post hole. They raised sheep until retirement.    "Traveling, I'm always happy when I return to my home on Harrison Creek," Helen wrote in a note she left in her house. "To hear the bugle of the bull elk or the scream of a mountain lion stirs my soul, and nothat I no longer raise sheep, I enjoy seeing the bear and coyote."    And so the nature center emerges. The Division of Wildlife is already working on a brood stock of whirling disease-resistant trout and a spawn run on Harrison Creek. The home and barnare in line for historic assessment. During Steamboat's inaugural All Arts Festival in August, the Steamboat Art Museum holds a Plein Air Paintout, where artists capture in watercolor and oils the landscape, wildlife and light around the ranch that Helen and Henry loved dearly. On Friday, Aug. 21, the Rehder ranch plein air paintings will be on display at the Steamboat Art Museum in the First National Bank building downtown � yet another gift that Helen and Henry left for Steamboat.    Info: Yampa Valley Land Trust: (970) 879-7240, www.yvlt.orgAnimal Urine, Bugles and Nerves of Steel - Steamboat a Mecca for bohunting 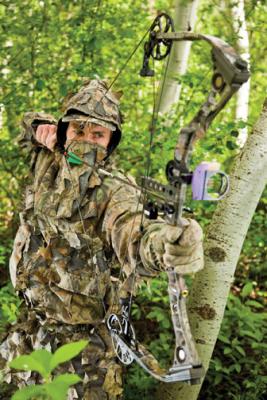 Hunters like Eric Meyer need cat-like stealth and camoflauge clothing to get close to their targets. Photo by Corey Kopischke.    As August approaches, the temperature drops, daylight wanes and elk and deer hunters flock to Northwest Colorado. But one group of hunters is more dedicated than the others. Theydress in camo, coat themselves with elk urine, hike and camp for days, and bugle to pursue their quarry. Unlike their rifle-wielding cohorts, they have to get within 30-40 yards of their targets without scaring them off, relying not on gunpowder but an ageold boand arrofor their quest.    "Steamboat is a hotbed for archery hunting," says John Pougiales, who last year was one of more than 2,000 hunters to get an archery license in the Routt County Data Analysis Unit. "The terrain and animal populations make it one of the best spots in the country."    Like telemark skiing is to alpine and kayaking is to inner-tubing, bow-hunting takes an extra dose of skill, knowledge and patience compared to rifle hunting. While the license is good for either sex, coor bull, bow-hunting takes more skill to succeed. Of last year's more than 2,000 archery licenses granted, only 308 elk were harvested, making for a 15 percent success rate on public land.    "You can't be seen or smelled," says Rick Myers, owner of archery outfitter Buck Mountain Ranch. "You have to stay out of bedding areas and not smell them up. Once you push them out of their safe house, they'll never come back and you'll be starting over from ground zero."    Archery season begins on the last Saturday of each August and culminates on the last Sunday of September. According to Jim Haskins, Area Wildlife Manager with the Colorado Division of Wildlife, the two largest elk herds in the country are in the White River Range of the Flat Tops and Bears Ears area northwest of Hayden. On average, harvest rates on public lands come in around 20 percent,whereas private land garners an 80 to 90 percent success rate.    "You can pay for a one-time guided hunt and be almost guaranteed a harvest, or you can spend the same amount for five years of public-land hunting for the same odds," says outfitter and avid archer Lonny Vanatta, who guides up to 60 archery hunters every year. Outfitting out of Wolf Mountain Ranch, Lonny says that complex thinking is involved in an archery hunt. You have to become "close" to the animal, he says, and almost become one with it. He adds that another key is to find out the elks' drinking patterns. "Most good bohunters get to within 200 yards of their elk," Lonny says. "Closing that gap is a real art. Archery hunting vs. rifle hunting is like fly fishing to spinner fishing ... but the rewards are incredible."To read more, subscribe to Steamboat Magazine today!
Article Gallery [3 Images] Click Any Image To Expand