Sandra Sherrod, artist and advocate for the arts

Sandra Sherrod is a woman with a calling – to turn Steamboat Springs into a town full of residents who purchase art produced by local artists. Even with the help of local artists and galleries, it’s not an easy task, with myriad challenges.    Subject matter is one. In Steamboat, people want to buy outdoor scenes, but as 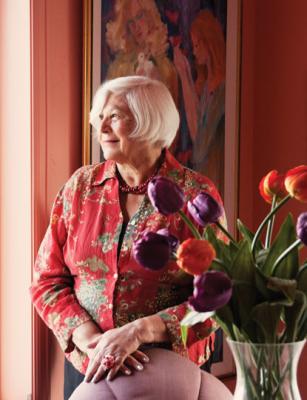 Another challenge is the disincentive designers face in placing local art in homes. Decorators can buy inexpensive prints on the Front Range, frame them, and then place them in homes with a lucrative mark-up. Local artists can only offer a 20 percent commission to designers. Finally, many locals already have a collection of art, and may have even built their home as a showcase for it.

Sandra doesn’t allow these challenges to get in her way. She is a founding force behind two institutions that showcase the local visual arts scene. First came the Art Walk, which she co-founded with Linda Laughlin of the Center for Visual Arts. It takes place the first Friday of every month, with most galleries participating. Even on stormy nights, hundreds of locals come out in force to snack and view local art. Sandra also helped establish the Artists’ Gallery of Steamboat, which is owned by 28 local artists. As the founding director, she has tracked sales since the gallery opened in 2006. “About half the art is sold to locals, and half to tourists,” she says.

Both the Art Walk and the Artists’ Gallery are “aimed at changing people’s idea of what art is in the local market.” They also give local artists a forum to create a mutually supportive environment and develop other projects. If Sandra has anything to say about it, Steamboat is well on its way to becoming the next Santa Fe. Participate in the local arts scene and you’ll have the bragging rights of saying, “I remember when Steamboat was mostly known as a ski town.”

Local Up-and-Coming Artists    Eighty to 90 visual artists currently work in Steamboat Springs, including many whose art is still affordable, but who are on are on their way to bigger things. 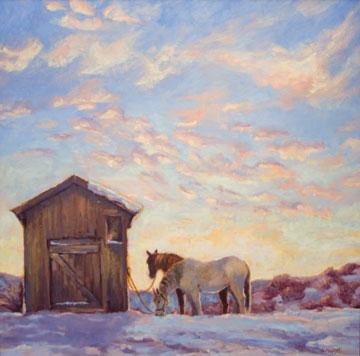 ".    Dancy Gould St. John is an up-andcomer who is a member of the Artists' Gallery, says founder Sandra Sherrod. Dancy started her artistic career as a faux finish and mural painter after studying at the Day Studio in San Francisco. She studied plein air painting with noted teachers and isnofocusing on that form in Steamboat. Her artwork can be purchased as a giclée print for as little as $75, with her original art ranging from $275 to $2,000.    Diane Perry's artwork is shown at Wildhorse Gallery. She is someone to watch, says gallery owner Shirley Stocks. Her favorite subjects are related to the American West, and include horses, cowboys and dogs. Her works � watercolors and oils � are priced around $350. Laura Wait has an 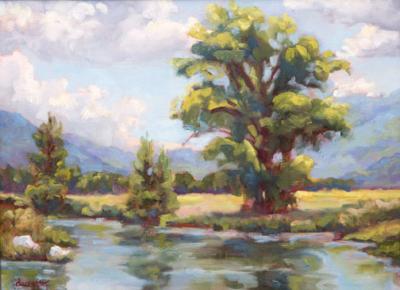 "Skylark Reflections" by Dancy Gould St. John, 9"x12", oil ($475).impressive resume and is coming into her own, says Kimberly Saari, whose gallery represents her art locally. She currently has a solo shoat Plinth Gallery in Denver, as well as a showing at Walker Fine Art. Also a master bookbinder and a maker of art books, her work is categorized primarily as abstract. Laura's work ranges in price from prints that are $350 to paintings and encaustics up to $5,500.    Cully Kistler is a popular local artist who owns Sleeping Giant Gallery with her husband, Don Tudor. She has dabbled in oil painting for most of her entire life, but now focuses on plein air painting. Her subject matter varies from pets and animals to old trucks. "When a local comes into the gallery, sees a place where he or she has been, and then buys the work because of that, that's really special," says Cully, whose watercolors start at $35 and oil paintings top out at $3,500.

A Look at Steamboat Buyers     Buying works by local artists is often more based on impulse than it is an exercise in building an art collection. In my modest home, I have a beautiful watercolor scene of local mountains 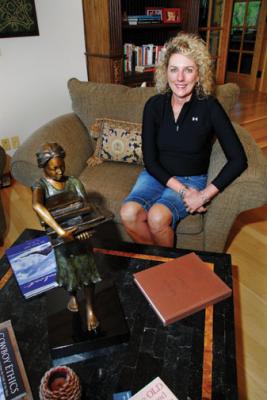 Located in the home of Kim Stravinski, "Summer Reading" by Sandy Graves reminds Kim of her college daughter, Samantha, who is an avid reader.by Dedi Knox, a large raku vase by local potter Gail Holthausen and a plein air painting of horses by Susie Jackson � all of which were created locally. In each case, I happened upon it and thought, "I like it, I can afford it, I'm getting it."    Julie Ernst doesn't consider herself an art connoisseur or even a collector. This mother of three happened to see a watercolor at her daughter's piano lesson one day. The painting, which depicts a dead tree, was by piano teacher Marie Carmichael. "I saa local landscape background in it, and it reminded me of the beetle kill pines, so I kneit would remind me of the epidemic of the beetle kill trees in our county," she says.    Kathy and Bill Cox have several pieces by local artist Cully Kistler in their Creek Ranch home. "We've rarely bought pieces with the idea of investment," Bill says, adding that the subject matter of their pieces includes trucks, wildflowers and their dogs. "The reason I was drawn to her art is because it's more graphic and vivid," Kathy adds. "Her art has gotten better and better over the years."    Barb Orms also collects local artists' work, including that of her niece, parttime resident Tamara Morton Johnson, who works in oils and specializes in large canvases and outdoor scenery. Barb also has pieces by her friends Bill and Barb Sanders, who show their work at the Artists' Gallery of Steamboat. Barb Sanders' medium is "photogravure," an intaglio printmaking technique, and Bill's medium is ceramics, bearing an influence of his Asian training. Barb owns photogravures of subjects like an old barn, an adobe building and a wooden doorframe. "It means a lot to have pieces by people you know," she says.