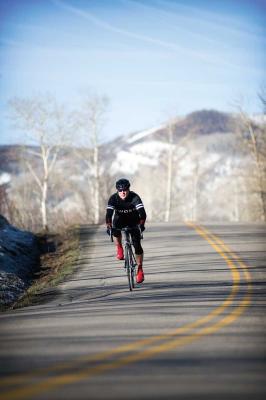 Road Warrior: Corwin Gugel coasting down Fish Creek Falls Road. Photo Courtesy of Ken WrightRoll 'EmSpring road rides in Routt County    There is one thing a road bike rider can count on during a Colorado spring: nasty weather.     Still, the desire to spin some early season miles is always greater than the obvious warning signs to stay inside at home.    A road rider will think those dark clouds clinging to the ridges above town might be thinning. The strong swirling winds, at some point, will become a tailwind. And if I ride strong I can beat any weather and come in dry.    No matter that common sense says those clouds are really a sucker hole just waiting to clobber you with rain and snow. No matter those winds will become a monster headwind, slowing you to a crawl, giving you more time to watch the black curtain of precipitation roll over Emerald Mountain to soak you to the bone before you get home.    No matter. With the mountain bike trails still muddy, nois a great time to go for a road ride here in the Yampa Valley. Here are three great choices: one short, in case you actually listen to the small voice in your head and the weather looks dangerous; one medium, for when you’re feeling lucky; and one long, in case you feel super cocky and strong.

Short: Let’s call this one the Tour de Town. On either side of Steamboat Springs are some pretty nice climbs that will elevate your heart rate and won’t leave you exposed if the weather hits the fan. In no particular order, ride these roads up and down each side of the valley like a half pipe. Climb to the top of one, descend, ride up the other side, crisscrossing the valley as often as you and as long as the weather hold out. Fish Creek Falls Road, Tree House, Steamboat Boulevard up through the Sanctuary, Dakota Ridge, Burgess Creek Road, Après Ski Way, Ski Trail Lane, Laurel Lane and Bear Drive. Roughly 35 switchbacks. Steamboat’s mini version of France’s legendary Alpe d’Huez.

Medium: This can be a massive 70-mile loop. Ride with a group of friends to help with pulls, block headwind, and administer psychological help when you realize the ride is too much too soon. Go from Steamboat Springs past Stagecoach State Park (U.S. 40 to Colorado 131 to County Road 14), ride to Oak Creek (Colorado 131), leave Oak Creek via County Road 27, ride CR 27 all the way to Hayden, and return on Highway 40 back to Steamboat. The great thing about this ride is that it offers a nice variety of hills, solitude and mostly quiet roads (i.e., no shoulders, spring frost heaves, potholes and potential carnage if you don’t pay attention). Bailout options are the towns of Oak Creek and Hayden. Don’t forget to stash cash in your jersey for some coffee or a beer as you wait for your soigneour to arrive to give you a ride home. Also look for County Road 33 (Twenty Mile Road) to shorten the ride back to Steamboat.

Long: This last suggestion may be a better late season ride once you’ve built up your endurance. But spring is a great time to set goals and start thinking Century (100+ miles). Simply stated, this ride is from Steamboat Springs, over Rabbit Ears Pass (U.S. 40), over Gore Pass (U.S. 134), over Yellowjacket Pass (County Road 14), and back to Steamboat (Colorado 131 to U.S. 40). On paper this ride is only a paragraph. On the road this ride can be glorious with the right friends, the right bluebird day, the right nutrition, hydration and motivation. Miss one of these key characteristics, however, and glory can turn to disaster. Nonetheless, this big-mileage, nearly 8,000-vert ride should be on everyone’s Must Ride Once a Season list. Then you have a year to recuperate for the next one.

Nordic Nerd-The first skate ski/raft circumnavigation of Howelsen Hill    Let's see Todd Lodwick top this on a pair of skate skis: the first skate-ski/raftcircumnavigation of Howelsen Hill.     It was mid-March and I had to reviethe nealpacka raft, a diminutive 4-lb. craft made by a diminutive grandmother in Alaska. But while the raft has opened the floodgates to a negenre of adventure � people have taken them on 1,000-mile traverses of the Brooks Range and Andes �my options in Routt County were limited. 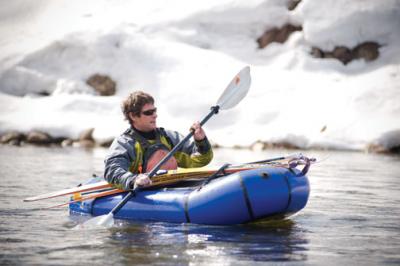 Ski and Stroke: Springtime in Steamboat Springs sometimes means combining sports. Photography by Ken Wright.    Then the light bulb flashed: using it to circle the Lighted Man's romping grounds �Howelsen Hill. It wouldn't be as radical as other adventurers' exploits, but like Todd and his golds, it would notch me a first.     I loaded my drysuit, raft, life jacket and breakdown paddle in a drybag andskate-skied southeast from my home in Fairvieand onto the Emerald Mountain Nordic trails. Lycra-clad skaters flashed odd looks my way as I languished uphill, paddle blades sticking out over my head like antlers. But I kept my head down � for embarrassment's sake and efficiency � and eventually traversed off-piste to the river by the Treehouse Bridge. A pair of fly fishermen eyed me warily as I pulled the raft out of my pack, inflated it with nylon bellows, fastened my skis atop and slipped into my drysuit. Then Iclimbed in the six-foot-long bathtub and set off.    I tested the durability of its urethanecoated nylon by bouncing off a snowbank near Backdoor Sports as if it was aufeis in the Arctic. Next, I ascertained its threeinch draby scraping over the Double Z shallows. Then came the clincher: punching Charlie's Hole, my skis and poles leading the charge like a battering ram. I made it through fine, to the gawks of onlookers everywhere.    Circumnavigation completed, I took out at the D-hole and rolled up the raft by theDepot. Then, in front of an elderly couple in a Buick from Wyoming, I shouldered my skis, threthe raft in my pack and hiked the two blocks home.    Without the benefit of a Satellite Personal Tracker or even GPS system, I had traveled six miles door-to-door and returned home safely. While a far cry from the other paces the alpacka has been put through, I'd done a Steamboat first. I might not have a world champion medal for it, and likely lost some respect from Nordic skiers who same that day, but I'll take such adventures any way I can get them � just like Todd and his return to racing.

The Healing Powers of Water - Yampa nurtures wound Iraqi war vets    Captain Joe Mornini is barking out commands as if he's on the battlefield in Iraq: "Let's go, first group in! Troy, you and I take sweep!"    While it could be a field drill as easily as a fight, he and his charges aren't in Baghdad. They're boating the Yampa River in Steamboat Springs as part of Team River Runner, a Washington, D.C., nonprofit co-founded by Joe that helps heal wounded Iraqi war vets through 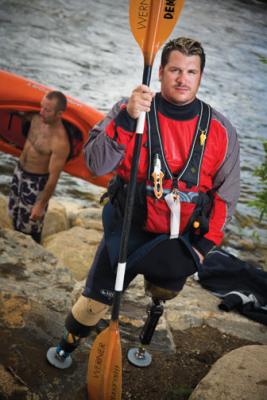 Water Therapy: Iraq War vet and double amputee Kevin Pannell, after another healing session on the Yampa. Photography by Corey Kopischke.kayaking. This is the group's second year in Steamboat, with plans to make the Yampa's healing waters a cornerstone of the program for several more.    Feeling at home with the regimented commands, the group � a mixture of above- and below-knee amputees and victims of Post Traumatic Stress Disorder � files out in perfect formation, at least until a femiss the first eddy and scatter about like leaves, leaving Joe and others to give chase.    While plenty of kayaking vernacular owes itself to the military � words such as "combat roll" and "bombproof brace" are heard on waterways everywhere � TRR is using the sport to give back to the military, and more importantly, those whose lives have been irrevocably affected by it.Since its founding in 2004, it has worked with more than 300 wounded vets, expanding from its origin at Washington's Walter Reed Medical Center to include programs at 16 hospitals nationwide. Injured vets take kayaking courses in the hospital pools, and once they learn their Eskimo rolls, they can participate on week-long trips like this one to Steamboat.    "We try to create an environment of healing through kayaking," says on-waterringleader Jason Beakes, a former member of the U.S. kayak team. "They're literally all in the same boat when they're out on the water."