Slodown, ease off, time to take your foot off the gas,” Bridgestone Winter Driving School instructor Morgan Kavanaugh says calmly into his radio.     It doesn’t register in time. His student, Joe, continues barreling toward the snowbank at the end of the curve, which greets his car with a muffled thud. Fortunately, no harm, no foul – Morgan has seen it before. 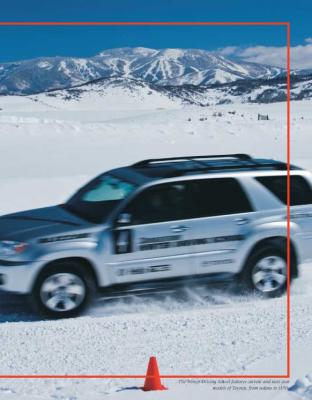 The Winter Driving School features current and next-year models of Toyotas, from Sedans to SUVs.    To the student in the next drill, timid old me, he gives opposite commands. “A little more gas!” he admonishes. “You have to go faster if you want to put the car into a skid.”     One drill has us trying to skid, and the other trying to avoid one. We’re humbled in each. Where Joe fails to control his skid, I can’t muster one for the life of me.    At the end of the day, though, the whole staff of Steamboat Magazine is feeling like A.J. Foyt at the wheel, patting ourselves on the back for our ice-driving prowess. That is, until Morgan takes us out for a drive. The pro driver executes controlled skids at every corner, and easily drives twice as fast as anyone on the staff. The proverbial icing on the ice-driving cake comes when he spins the car around backwards and slides it perfectly into a parking space between two other vehicles in the lot. We’re awestruck.    It’s all in a day’s work for Morgan, a 21-year veteran ice-driving instructor. He’s seen better than us and worse, all in the name of teaching people to become better drivers on ice.    He’s also seen his share of drivers slightly more famous than us. Asked if he’s ever taught celebrities hoto drive on the ice, he responds, “absolutely.” Then he’ll proceed to list a series of famous racecar drivers. While the rest of us may think of screen stars, Morgan’s heroes are champions on the track.   One of the highlights of Morgan’s two-decade career at Steamboat’s Bridgestone Winter Driving School was teaching Bruce Brown, director, writer, producer and narrator of the 1971 motorcycle documentary, On Any Sunday. “It was that movie that influenced my life the most,” he says. “It made me a motorhead. It essentially brought me to the Winter Driving School.”    Bitten by the motorcycle bug, Morgan began competing in trials races in 1975, first in Colorado and eventually nationally and internationally. In 1987, he moved from Boulder to Steamboat. He met two ski patrollers, Jerry Pearl and Mark Cox, who were working with Jean Paul Luc, who founded the school in 1982. “They knemy motorcycle background and needed instructors,” Morgan recalls.    Today, Mark is the sole owner of the school; Jean Paul and Jerry have gone in other directions.     Morgan is one of 12-15 professional drivers who work at the school each winter. Others include three-time rally champion MattheJohnson; David Kern and Mark Cox, regulars in the Rally America National Championship Series and Pikes Peak Hill climb; and Kurt Spitzner, former director of the U.S. Rally Championship Series. Other celebs who have spun their wheels at the school include Touring Car driver Kevin Schrantz, PPG Indy Pace Car Team member Lea Croteau, and Owen Trinkler, a driver in Grand Am, American Lemans and Nascar Trucks series. 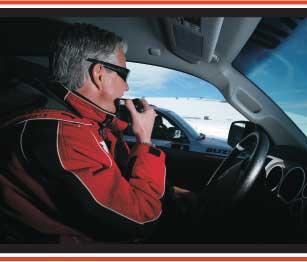 When the rubber hits the ice, students receive instructions via radio whiie under the watchful eye of Morgan.    “One of the first jobs I got in the industry was as an ice driving instructor,” says U.S. Formula Drift Champion Tanner Foust, who also began his career at the school. “A lot of the techniques I’ve learned are the result of learning car control on ice, where it’s very easy to make a mistake.    “It makes you learn discipline,” adds Tanner, who co-hosts NBC’s Top Gear USA and won the 2007 X-Games Rally Super Special. “When people ask me hoto get into racing, I tell them to go to an ice driving school and develop some car control.”   Morgan, for one, is awed with the company he has kept at the school. “To think that I was an instructor with him,” he says of Tanner, admitting that Tanner sometimes got the better of him when they raced. “There’s a brotherhood of drivers there, and I’ve learned a lot from Jerry and Mark.”   Morgan also enjoys the school’s many students, including famous racecar drivers and special groups such as the Navy Seals. “We do a custom three-day program for them, complete with night vision goggles,” he says.  One time, a man showed up at the ice driving office, insisting he be allowed to drive his car to the track, which is located on the outskirts of town at a historic ranch. In general, students are shuttled to the track to avoid congestion, but this man would not take no for an answer. It turns out that he had a veritable arsenal in his trunk. “We found out later he was from the Polish equivalent of the Secret Service,” Morgan recalls. “We teach everybody – FBI, Secret Service, school bus drivers, taxi drivers, county employees, even building inspectors.”   The school offers a variety of programs, ranging from a half-day safety class to a multi-day performance school. Each class is limited to 12 students, with corporate programs and private lessons also available.   While Morgan likes teaching members of special forces because they’re used to training and are good listeners, he also likes teaching novices, especially young people. “I like beginners because the learning curve is greater – the light totally goes from off to on,” he says, adding that it’s the first thing he’s going to do when his three daughters, Ellie, 9, and twins Tia and Jensen, 7, learn to drive. “Teaching younger kids can be really rewarding.”   He advocates the course for teenagers as soon as they get their learner’s permit at age 15 1/2. “That way, by the time you get your license, you already knothe theory,” he says. “It’s important because the number-one killer of our teens is driving.” 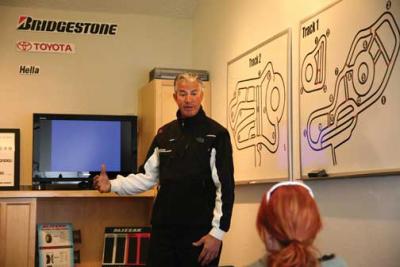 Before students get behind the wheel, they recieve classroom instruction.   One of the school’s most ardent supporters is Jim Stankoon whose centennial ranch the school is housed. Not only do the 60 acres of land Jim designates for the school afford spectacular views of the mountains, but they also include three tracks, two that are more than one mile long and one that is a half-mile. “It’s a really safe learning environment,” Morgan says. “That’s what I love about this school – it’s probably the number-one, skid-control program in the country. It’s a lot of fun and imparts important information. If one thing I talk about saves someone’s life 10 years from now, then I’m happy.”    Although it’s easy to talk about homuch fun the driving school is, Morgan and his felloinstructors see it as being much more than a cool way to spend a day or two … even three. It could change, if not save, your life. 8:00am · Steamboat Art Museum
View All Add Your Event