If you were around Steamboat Springs in October 1997, you’ll never forget the massive blowdown of 4 million trees when hurricane-level winds destroyed more than 20,000 acres of old growth forest in Routt National Forest and the Mount Zirkel Wilderness areas. The blowdown opened the door to an epidemic infestation of spruce bark beetles, which, in a sad twist of fate, coincided with the 20- to 30-year natural cycle of the pine beetle epidemic.     While these are natural occurrences that humans can’t control, the devastation is obvious and decades will pass before many slopes will be completely green again. But when life hands you lemons, sometimes all you can do is make lemonade. Several local carpenters and artists are doing just that as they take advantage of the plentiful beetle kill pine for creative experimenting, making everything from furniture to abstract sculptures. 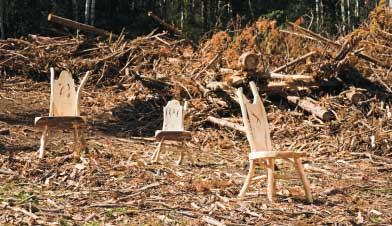 Beetle kill furniture, like these rustic chairs, offers locals a way to deal with the decimation of locals.

“There’s an abundance of this [beetle kill] wood and it’s good to try to use it,” says Mike Roach of Oak Creek’s Dovetail Designs, which makes handcrafted furniture. “Beetle kill furniture is about as green a product as you can make and has great character. And the beauty of it is that it’s all local.” While he prefers working with reclaimed hardwoods, with beetle kill pine literally falling down around us, locals need to find ways to use it, he says.      Because of the way the tree infestation happens, beetle kill pine has a distinct look. Here’s hoit works. A female beetle bores through the bark into the phloem layer (that’s the tissue that carries nutrients around the tree). Once in, that beetle puts out pheromones to attract more beetles to the tree, and soon a bunch of beetles are eating the phloem layer and laying eggs. The tree reacts by increasing resin output, which is stained by the beetles’ blue stain fungi. This blue stain blocks the resin response, and the beetles have effectively won the war with the tree. Within about two weeks, the tree begins to starve to death because of the damage to the phloem layer. When milled, parts of the tree will have a bluish tinge here and there, giving it the characteristic beetle kill look“    The stains are pretty interesting,” says Matt Graves, a local woodworker who is taking advantage of beetle kill to stretch in different artistic directions. “And other things are too – like elk-chewing marks, weird twists from snowfall. I used to have to go out and hunt for unique wood, but nopeople are getting rid of truckloads of beetle kill at a time.”     Matt adds that working with beetle kill is also conducive to working with hand tools when building furniture. “You can’t just run out and buy expensive wood to experiment with,” he says. “You have to use what you have – recycled wood.” He adds that the piece of wood itself often tells the artist what to make out of it. “That’s ho‘Sandhill Twist’ came about,” he says. “It was made based on having those big pieces of wood.” 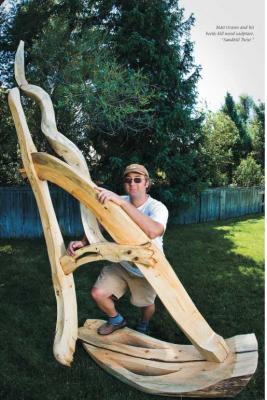 “Sandhill Twist,” which is made entirely of beetle kill pine, is a 10-foot-tall sculpture  depicting a sandhill crane dipping its beak to catch a fish or drink water. The detailing is delicate, but in keeping with the mass of the sculpture. Matt used artfully designed pegs and a sleof joints to hold the piece together – no nails, no glue.

Marc Sauer is a woodworker from Laramie, Wyo., who recently participated in a shofeaturing beetle kill pine at the Artists Gallery of Steamboat, along with Mike and Matt. “The problem is that the rest of our population is in limbo about it,” he says, adding that he’s not sure whether people are ready to embrace it as a building material, or to purchase creatively made items made from it.    Marc’s on something of a crusade, however, to raise awareness about the need to use beetle kill, and use it quickly. He has a background in forestry management, and says the next step in the beetle kill process, burns. “We need to figure out a solution quickly, because these forests are going to burn,” he says. “I’d like to see people embrace this as a building material – there is nothing wrong with it if you select the right pieces.” He adds that a company in Kremmling is making interior wood paneling using the beetle kill wood that is

Marc has made dressers, tables and other hand-made pieces using beetle kill pine, and he often incorporates antlers for the door pulls to add to the pieces’ natural feel. “They’re another good green material for adding to the look and feel of beetle kill furniture,” he says.

In years past, beetle kill pine has gone in and out of style as a fashionable material.

Now, however, the opportunity has arisen to both embrace it and increase demand for it. “If I had a house made out of pine or ponderosa, I think items made out of beetle kill would fit in perfectly,” Marc says.