So the backcountry sounds intimidating. All that climbing through deep snow, the risk of avalanches, and then, gasp!, having to learn that darn telemark turn in order to go back down. 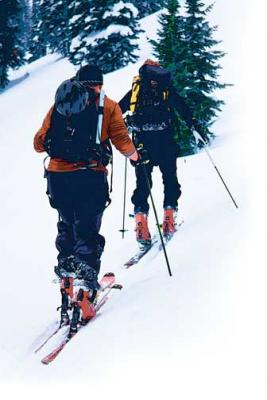 Eric Meyer (front) and Tyler Targee putting the latest alpine touring gear to the test. Photo by Corey Kopischke.    Relax. Life has changed in the ski industry. Once just the tool of the extreme mountaineer, alpine touring gear has become more available to the every man than ever before. It lets you free your heel for the climb up, complete with heel lifts to make the going even easier, and then lets you lock your heels down as if you were alpine skiing on Mount Werner. In fact, this breed of binding has become so beefy that many people even use it as their go-to binding on resorts, giving them the ability to ski the mountain and tour afterward.

Boots? You can get special lightweight touring boots just for the purpose, or you can use the ones you’ve got by loosening the cuff on the climb and cinching the buckles down for the descent. Skis? You can go too fat (and hence, heavy) if you’re using them primarily to climb uphill, but you’ll want some degree of girth for floating on powder on the downhill. Just

make sure you get skins to match.

But the most important aspect of AT skiing is the bindings, which are nobetter than ever – all of which come complete with DIN settings and brakes – and are finally blurring the boundaries between conventional alpine bindings and those with a touring mode.

To save you the paces, last winter the Steamboat Magazine staff had the tough job of trying out this latest crop of bindings from the best companies in the industry. We used a “work” day and trudged to the top of Walton Peak in search of soft turns. What we found was sunshine, fresh powder and one of the most easily accessible testing grounds in the valley. “It opened up a whole neworld compared to traditional telemarking,” says magazine president and field tester Deb Olsen. “It takes some getting used to the netechnology, but

the reward is well worth the learning curve.” Read on to find out what all we learned about the latest crop of AT wares. Marker Duke

One of the most common problems in finding equipment for newbie backcountry skiers – especially those who’re already expert shredders – is the beef factor: deciding on a binding that toes the line between being able to rip all conditions like bumps, cliff hucks or carving groomers, with something that can still be used to trudge uphill without pulling your

hips out of joint.

Enter the Marker Duke ($495), a grizzly bear of a binding with a ginormous DIN setting

(6-16). It’s unchanged since last year, and is ideal for skiers who seek one setup for the

mountain and the backcountry; it’s perfect for touring into Fish Creek but still ripping up

Nelson’s. Our only complaints were the weight (5 lbs., 14 oz.) and the change from a locked-heel skiing position to free-heel climb mode. The release is underneath the boot so you have to remove your foot to change over. This season, Marker is also offering the Baron, a 12 DIN, lighter-weight model (5 lbs., 6 oz.), and at $435, lighter on the pocketbook too. (www.markerusa.com) 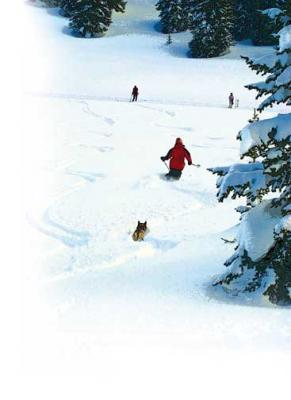 One powder hound, Janet Cino, laying tracks for another. Photo by Joe Carberry.

Fritschi is one of the oldest names in touring bindings and the Freeride Plus ($440) is skiing’s equivalent to the sculpture “David” by Michelangelo: a masterpiece. With a maximum DIN setting of 13, the Swiss-made Freerides are a happy medium between touring bliss and lift-accessed nirvana. At 4 lbs., 8 oz., though, we see these as more of a touring

binding for long tromps in places like North Routt County. Plus the rear release tabs alloyou to lock down your heel without removing your skis. As with the other bindings in the test, we were stoked on the way the Freerides accommodate both an AT boot or regular alpine, so no need to break the bank by buying nefootgear. As an added bonus, put your skis together and you can carry them by the bindings’ center rods instead of over the shoulder. For those wanting something a touch lighter, try the Explore ($380, 3 lbs., 11 oz.), with a DIN setting of 3-10. (www.Bdel.com)

Cross country skiers might recognize the name Rottefella as a popular manufacturer of cross country bindings. But the c omp a n y has also shown it can step up its game in

the alpine touring world with the recent release of the Naxo ($400).    Similar to the Dukes, the Naxos (4 lbs., 14 oz.), distributed in the U.S. by Boulder’s Backcountry Access, are for traditional in-bounds alpine skiers looking to experience backcountry adventure without any hint of sacrificing performance. The Naxo’s DIN setting runs up to13, which is plenty for most applications. And the toe piece is the most alpine-looking of the bunch, meaning you won’t be stepping into unfamiliar ground. Perhaps the Naxo’s most compelling feature is its Virtual Pivot system, which offers climbers an ergonomic, rolling feel through an added hinge beneath the ball of the foot. Switching from skiing to touring mode is easy by using your ski pole grip, and the binding’s heel lifts are one

of the simplest to use of the bunch.    It’s plenty beefy for any in-bounds terrain, and light enough for most touring options. Best yet, it offers a solid boot-binding interface that doesn’t interfere with your ski’s flex. (www.backcountryaccess.com)

While getting in and out of the Dynafit ($570) took some getting used to – due to the toe piece clamping onto the outside of special Dynafit-compatible boots – the learning curve was outweighed by the fact that the Dynafit is by far the lightest alpine touring binding on the market, weighing in at a paltry 2 lbs., 3 oz. If weight is your primary concern, this should be your primary binding. This year’s model offers a beefier, redesigned carbon-fiber base plate and hele body, and a DIN setting that adjusts from 6-12. Many feel there is nothing better for covering ground efficiently, though admit that putting them on in steep terrain takes some acclimating of its own. The bindings also alloyou the ability to lock the toes if you want when not releasing is paramount.

The main drawback is that you need a boot that’s compatible with the binding, often requiring an additional expenditure. But those same boots (from Dynafit and other manufacturers) will work with other alpine touring bindings also. (www.dynafit.us) 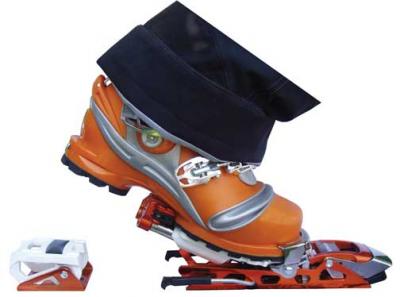 Okay, telemarkers, noit’s your turn. While last year there were only a handful of these netele bindings on the mountain – one pair used by PSIA telemark instructor Barry Smith and another by Telemark Skier magazine editor Eugene Buchanan – these are the beefiest tele binding on the market, period. With a unique boot-binding interface (hence NTN, NeTelemark Norm), whereby the binding clamps around the ball of the foot, they were revolutionary last year, and are norefined even more. They require a netelemark boot without a duckbill that, with the NTN ($400), can be used as either a tele or alpine boot.

The neattachment system provides excellent edge control and lateral stability for a tele offering, and comes with a free-pivot system for touring that will make you never want to tour in a non-free-pivot telemark binding again. The 40 degrees of free pivot the binding offers feels almost frictionless when compared to touring in the cables of yesteryear.

They might be slightly heavy for a tele binding at 4 lbs., 3 oz., but the control they offer on the hardpack and bumps is worth every ounce. Another nice feature is the fact that you

don’t have to bend over to fasten the binding or switch from touring to ski mode; a simple flick with your pole takes care of it all. (www.backcountryaccess.com)