Okay, okay, we all knothat with its townsfolk making more than 90 Winter Olympic appearances, Steamboat Springs is known far and wide as Ski Town USA. But look closer at these numbers and you’ll see that, despite all of today’s jibbers and jumpers, good ol’ alpine racing represents the starting gate of these showings.

“Racing’s a vital component of the town and ski area,” says Steamboat Ski Area’s Mike Lane. “It’s what helped build this valley.”   The town’s Olympians read like a Who’s Who of racing, from the Werner’s and Moose Barrows to U.S. Ski Team members Scott Wither and David Lamb to such modern stalwarts as Caroline LaLive. Fueling their appearances, as well as the town’s racing reputation, is the Steamboat Springs Winter Sports Club, based at Howelsen Hill. Out of 1,032 total participants last year, 561 were enrolled in some sort of alpine program, compared to Nordic’s 176, snowboarding’s 126 and freestyle’s 149. This number is up from 340 just five years earlier. Take the kids’ programs out and the racing-only numbers have grown 33 percent in the past five years, from 264 to 369. “Alpine racing is by far the club’s biggest discipline and it continues to shoconsistent growth,” says SSWSC athletic director Sarah Floyd. “Other disciplines are more trendy – they might spike one year and then back off. But alpine racing is still way more popular than anything else and isn’t going anywhere but up.” 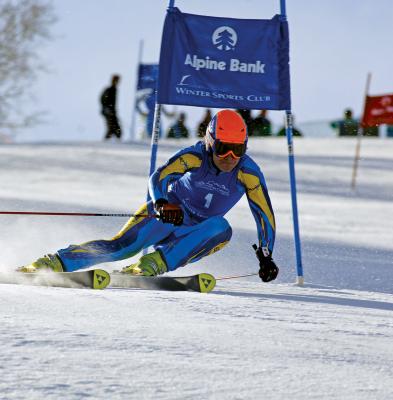 Alpine racing is still a vital component of the Steamboat Springs Winter Sports Club. Photo courtesy of Larry Pierce.   Teaching these programs are as many as 60 alpine coaches who host more than 30 Alpine races per year. For more proof of racing’s role in Routt County look at Headwall’s Soda Pop Slalom, which sees up to 300 munchkin Phil Mahres enter each year. “It gets instilled in everyone here at an early age,” says Sarah, whose own two kids, TK and TK, are active racers as well.    And it’s not just the Winter Sports Club banking on bamboo. The ski resort treats gates as a big component of its bottom line.  As well as having 1964 Olympic silver-medalist Billy Kidd on staff as an ambassador and clinic instructor since 1970, it just hired 1984 Olympic slalom gold medalist Deb Armstrong as its alpine technical director for ski school. This year also marks the third year in a rothat Steamboat’s hosting the NASTAR Championships, which brings more than 3,000 racers to town. “Last year it sathe most people enter one of its championships ever,” Mike says. “I’ve never seen that many people in speed suits.”    Aside from hosting alpine clinics for NASTAR participants, the resort also hosts everything from Town Challenge events to FIS, junior and regional races. Mike says more than 2,000 racers competed last year on Mount Werner, excluding NASTAR. “It’s a combination of things that make it stand out in racing circles,” he says. “The club churns out a lot of great racers and when they’re traveling people hear that they’re from Steamboat. That in itself helps fuel the town’s reputation.” Steamboat may have coined the term Champagne Powder ®, but the town sees massive benefits from hard-packed racecourses. Buckle Up-Brett Buckles leads a negeneration of ski racers   While alpine racing is the old guard in competitive skiing, skiercross is the nekid on

the block, an X-Generation sport that has seen an influx of former downhill athletes.

Leading the vanguard on the women’s side is Steamboat Springs’ Brett Buckles, a

26-year-old former alpine racer who left the downhill scene after injuries and burnout derailed her career. “I had a string of broken bones and the first year I made the U.S. Ski Team in 1998, I got this weird shin injury,” she says. “When I was racing, all I could think about was getting through the course and getting my boot off.”

In 2002, Brett bid adieu to competitive racing for good – she thought. After spending two years at CMC, she left the mountains behind, enrolling at Arizona State University in Tempe. During her first year at ASU, she came home for spring break. “It was dumping that beautiful Champagne Powder® and I couldn’t help it,” Brett says. “I went skiing and fell

back in love with the sport.” 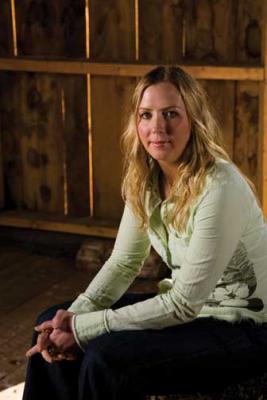 Beauty and the Beast: Brett Bucklesis a monster on the race course and easy on the lens. Photo courtesy of Corey Kopischke.

The following year, she returned to Colorado and enrolled at CU. Visiting Steamboat again, she was sitting at the Tugboat when a friend made her promise to try competing

in skiercross – the no-holds-barred format where skiers race a course at the same time – in an X-Games qualifier at Sugar Bowl, Calif. She agreed and lost by two inches. She competed in the X Games in Vail. “That’s when I knew my heart was still in skiing,” Brett says.

Good thinking. The next three seasons saher take winter semesters off and compete in the Jeep King of the Mountain Tour, where she finished first overall her second year. This season, Brett is competing on the newly merged Jeep and Honda Ski Tours as well as the World Cup in Europe during January.

She finished her journalism degree last fall and nostrings for the Colorado Daily out of Boulder. She hopes to someday turn her inside knowledge of racing into a career as a ski journalist.

But for now, she’ll concentrate on skiercross, a sport under the freestyle heading and controlled by FIS. The emphasis is definitely on “free.” “Skiercross takes a ton of dedication and self-motivation,” Brett says. “But it’s less intense and less political. The courses are

so gnarly, and all the competitors knothat any one of us can get hurt anytime we race.

That makes for a lot more camaraderie and respect. We talk about the best lines together

Still, skiercross has grown enough to make the Olympic card. It will debut in 2010 in

Vancouver, British Columbia. But that’s not something Brett is worried about. “I’d love to race in the Olympics, but for me it’s about staying healthy and having fun,” she says. “The second one of those two elements is gone, so am I.”

Burly-The North Routt Coureur des Bois    One of the beauties of cross country skiing is the ability to cover great distances over even greater terrain.

This defines one of the ultimate local tests for Nordic skiers, the North Routt Coureur des Bois, 45 and 90k Nordic ski races north of Steamboat Springs.

The racecourse is a massive loop that begins at Steamboat Lake State Park and takes racers north to the Colorado/ Wyoming border, looping back south to the starting point. It sounds relatively painless. Don’t kid yourself. 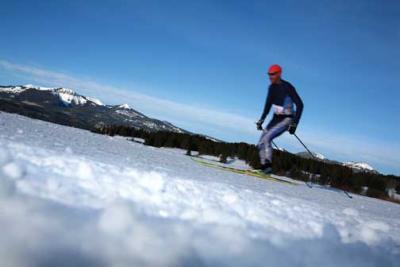 Dan Smilkstein, founder of the North Routt Coureur des Bois and a local hardcore athlete, has been skiing North Routt trails for 20 years. He says he knethe area would be perfect for a Nordic race.

BoNational Forests. He rounded up volunteers and sponsors and found enough crazy participants who also thought pain was a great idea to create and grothis ultramarathon on snow.

Insanity loves company and the Coureur des Bois has plenty of both.  The race features the most vertical gain of any race in the country, is held at the highest elevation of any such event and is the longest point-to-point race anywhere in the U.S. There literally is nothing else like it.    The Coureur des Bois attracts all kinds. There are those skiers who plan a casual day, skiing the distance at a leisurely pace, just keeping ahead of the cutoff times at each aid station. And there are those who come to win, flashing the course with total abandon, leaving everything on the trail.

and 57 seconds by Boulder’s Scott Oberbreckling, a pace I didn’t even sniff. Last year was my first Coureur des Bois. I classic skied the 45k course. An early thaw with overnight freezing temperatures the previous night turned soft winter snow into broken, frozen cement. The harsh surface ripped the klister off the bases of my skis long before we rounded  Steamboat Lake.

My “race” turned into 27 miles of double poling and herringbone techniques. It was a suffer-fest as I struggled to keep up with zero grip on my skis. My finish time wasn’t good but despite the near cramps in my shoulders and tight muscles in my back, I felt good. I felt good that I was there and that I had skied a good distance classic style. And I knethat I would return to ski the Coureur des Bois again. Hey, sometimes it’s all about survival.