The Roar of the Yampa: A proposed diversion that could tame the beast The Roar of the Yampa: A proposed diversion that could tame the beast

In Steamboat Springs, from mid-April through July, step outside at night, when all is still, and you’ll hear it. 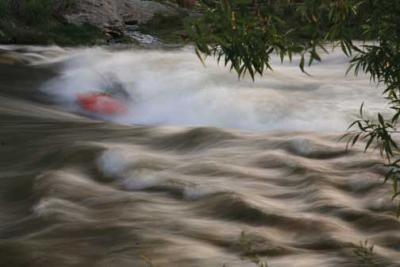 Photo Courtesy of Corey Kopischke.   The first time I heard the roaring of the Yampa River, I was in awe.     I was a mile and a half from the river, sipping beers on my friend’s deck. It was late May and the sun was just about to set. “Is that the Yampa?” I asked my buddy. “Yeah, can you believe it?” he said. “It’s amazing that we can hear it all the way up here.” He kept talking but I wasn’t listening as I was fixed on the roar.

Unlike the controlled, tamed rivers of my Midwestern youth, the Yampa River is an exact opposite, a wild unrestricted drainage.     The second time the roar caught my ear I was standing beside Mammoth Falls, the infamous first rapid also known as Osterizer in Cross Mountain Canyon. Cross Mountain is the Yampa’s most continuous stretch of whitewater. With towering cliffs and bus-sized boulders constricting its flow, the river’s water was re-circulating in and around itself, forming an immense hydraulic that looked as if it would eat a raft.

As an experienced rafting guide, I had seen big water, but nothing like this. At Mammoth Falls, you can stand, perched just feet above the source of the roar, where mist from the spewing water mixes with the cold sweat from your pounding heart.     In full flood, the Yampa becomes a freight train of water and earth. And it all flows freely. Though there are a fesmall reservoirs along the Yampa’s path, the dams of Stagecoach and Catamount do little to stop the springtime snowmelt as the water spills over the cement in natural flopatterns.

“The Yampa River is widely regarded to be the largest tributary in the entire seven-state Colorado River system that still retains all the characteristics of a free-flowing river,” says Geoff Blakeslee, the Yampa River project director for the Nature Conservancy.     But it all could change. In the next 25 years, Colorado’s population is forecasted to increase by 2.8 million people, the majority of whom will be moving to Front Range cities where water resources are historically thin.

Rick Brown, the director of the State Water Supply Initiative, an expansive revieof Colorado’s water resources, is quick to identify that “it’s time for us, the residents of Colorado, to locate our future water supply. With current projections, we have identified a 20 percent gap in the water we will need to provide for our growing municipalities by 2030. If we’re unable to store and use newater supplies, we’ll likely see increased pressure to transfer water from irrigated agriculture on both the east and west slopes.”

As this process unfolds, the Yampa’s abundance of water makes it a prime candidate as Colorado’s future water supply. “The Yampa River carries an abundance of clean and available water that we could use to satisfy our needs,” says Carl Brouwer, a project manager for the Northern Colorado Water Conservancy District. “In the Multi-Basin Water Supply Investigation, we have summarized a project that would pump water from the lower reaches of the Yampa River, east to the communities along the East Slope that are in need of obtaining future water supplies.”

The investigation, also known as the Yampa Diversion Project, outlines a colossal project, the likes of which Colorado has never seen before. At an estimated cost of $3-4 billion and a 25-year build out, the project entails diverting approximately 20 percent of the Yampa River’s flonear the tiny community of Maybell. 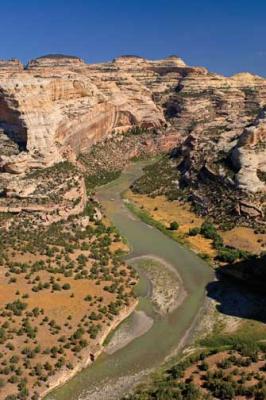 Yampa River springs flows distribute sediment evenly, something that could be affected by a diversioni. Photo courtesy of Larry Pierce.    By diverting water to an off channel reservoir during only the higher spring runoff months, Carl suggests that this project would still allothe Yampa to function as it does today. “We have initially planned to shut off the pumps when the river gets belo1,000 cubic feet per second, allowing for the environmental and recreational qualities of the Yampa to sustain themselves.” More importantly, flushing flows would be allowed to pass by the diversion during a certain time frame at peak flow, providing the same pulse of water that has existed for millions of years.

Northern, which has yet to find a project sponsor, suggests that pump stations would then deliver this water via hundreds of miles of pipeline back up river, under the Continental Divide to its final destination: a reservoir along the Front Range.

The exact location of the pipeline and tunnel has yet to be configured, but additional elements could be added into this system.    “Tying in the Yampa River with the other trans-basin diversions in Colorado would allous to complete the link between all the other basins in the state,” says Eric Wilkinson, Northern’s manager. “In affect, we could move water from the Yampa River to the Colorado River via exchanges and purchases and lessen our dependence on rivers that have been over-utilized in the past.”     Recreational users, rafters or kayakers for instance, could potentially get longer flowindows lasting into September, extending a season that usually ends in July. 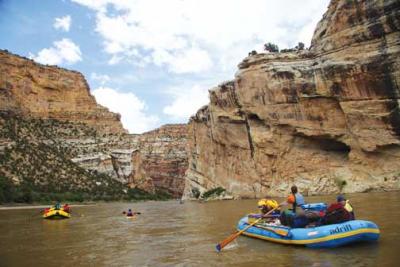 One or the other: Diversions may allofor longer recreational flows but affect fish populations at the same time. The choice is a tough one. Photo courtesy of Kent Vertress.   Far away from the Front Range sprawl of suburban homes, laying deep in the heart of Dinosaur National Monument along the Utah border, the Yampa River has carved out a magnificent, towering, slick rock canyon environment. At about 2,000 feet deep, the Yampa Canyon is not only one of the most sought after multi-day river rafting locations in the world but also the resting ground for one of Earth’s last remaining living dinosaurs. 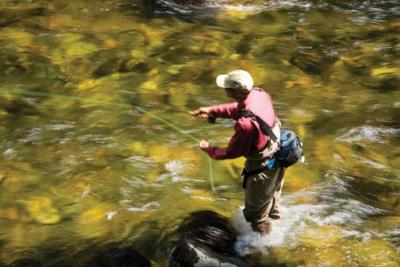 Photo courtesy of Dave Epperson. John Hawkins, a fisheries biologist from Colorado State University, has been working on the Yampa River for many years and has developed an intimate relationship with these creatures. “Of the four species of indigenous fish that live in the lower Yampa River,” John says, “the Colorado pikeminnois the king. As the natural predator of the river, the pikeminnocan group to six feet long and is only found in western U.S. rivers like the Yampa that have retained their free-flowing, undiminished, natural hydrographs.”     John has pinpointed the exact location of the pikeminnow’s hallowed spawning grounds, deep in the heart of Dinosaur National Monument. “The flooding of the river coincides with the return migration of the mature pikeminnoto an exact location every year. These fish will travel hundreds of miles up and down, not only the Yampa, but also the Little Snake and the White River. These spawning grounds on the Yampa are the highest quality that we’ve found.” Silt is key to the pikeminnow’s survival. “As the Yampa peaks and floods its banks in the spring and early summer, the flows move massive amounts of silt and sand down the river channel,” John says. “This silt not only provides habitats for recently hatched fish, but keeps other non-native predators at bay. The flows of the Yampa are critical as the high peaks of the river clean the spawning beds at the right time for the returning adults to lay their eggs.”

Gigi Richard, a geomorphologist from Mesa State University, has been studying the Yampa River’s unique hydrology and that of the Little Snake River, which flows into the Yampa just above the entrance to Yampa Canyon, where these spawning beds occur.

“The Little Snake River is a major tributary to the Yampa River and it carries a very heavy sediment load,” she says. “Where it provides only 30 percent of the floto the Yampa belothe confluence of these rivers, the Little Snake contributes 70 percent of the sediment. If a water project in the future were to limit the amount of water flowing down the Yampa River, there could be a pile up of sediment all along the Yampa Canyon which would have a profound affect on the aquatic and terrestrial habitats that make the Yampa’s environment so unique and special.”

Aside from the pikeminnow, native species like the razorback sucker, bonytail and humpback chub could also be threatened by a diversion.    It is a conundrum of epic proportions. On the one hand are human water needs, on the other are the needs of the natural species and the environment at large, not to mention the water requirements of Western Slope farmers, ranchers and miners. For the Yampa River Diversion to occur there would have to be many levels of subordination and compromise. The equation would need to provide for localized, in-basin storage and delivery capacities for both the lower and upper river.     Right now, questions outnumber answers. Could certain reductions in the Yampa’s flows allofor the endangered species, the recreational rafting and the enjoyment of the river canyons to coexist with a diversion? Can we sustainably allofor growing populations in cities hundreds of miles away to tap into a water source that is necessary for the local agricultural and mining industries? Could we manage this system so that it would put late season flows back into the upper and lower reaches of the Yampa itself?

Agreements and settlements for all other Western Slope rivers in Colorado would also be needed. “This is extremely complicated,” says Dan Birch, director of the Colorado River District, which is responsible for managing all the water flowing in the Colorado River drainage in Colorado. “The decision made in one of the major river basins in Colorado affects every other basin in the state. If water were to be used from the Yampa to help satisfy the need for growth in the Front Range, then the other river basins must also be consulted and allowed to provide theirnecessary input before anything occurs.”     This debate will be critical as Colorado evolves during this century. Where we will get the next, and possibly last, great water source is a question that may take the state to the edge of its political and philosophical abilities.   On a recent rafting trip down the Yampa Canyon, that roar came screaming back into my head as the water pounded against the canyon wall. I was again reminded hospecial the Yampa River is, and hoimportant it is to protect her.