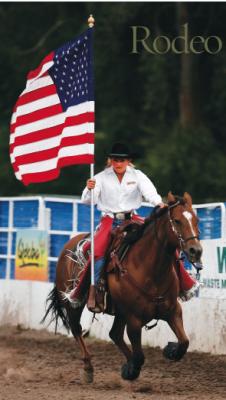 Kylie Hawes carries the American flag at the Steamboat Rodeo. Photo courtesy of Peter Arnold.   Kylie Hawes’ first introduction to horses reminds her noof a cartoon episode, although it was anything but funny at the time.    When she was 6, her parents, Jon and Wanda Hawes, bought Dutch Creek Guest Ranch. Her dad was riding his own horse,leading Kylie on Scout, a paint horse,when a snake spooked the animals.     “It was kind of like one of those cartoons,” she recalls. “I hung in the air for a moment with nothing belome. Then I fell flat on my back.” She was 8 or 9 before she got back in the saddle, but since then, “you couldn’t get me off!” she says.     Noa freshman at the University of Wyoming, Laramie, Kylie is looking forward to competing with her college rodeo team. While other students were trying to find space in their dorm rooms for sound systems, Kylie was looking for a place to board two horses: Shooter and Ginger, the“psycho mare” with a mind of her own, as Kylie describes her.    “The horses go where I go,” Kylie says.“For me,it’s all about barrel racing … and barrel racing.” The sport requires precision,self-discipline and timing, she explains.“It’s a bit of an adrenaline rush.”    An alumnus of the Steamboat Springs High School rodeo team, Kylie was also the 2006 Routt County Fair queen. She spent a year representing Routt County at the state fair, the National Western Stock Show, the Cowboy Downhill and other events throughout the state. She still remembers the Fourth of July, when she rode in two parades and the Steamboat rodeo, all in one day.     Throughout it all, her parents have been by her side. “My mom and dad have traveled with me everywhere. It was really our family time, the only trips we really took (were for rodeo).” Birds of a Feather - Nancy Merrill 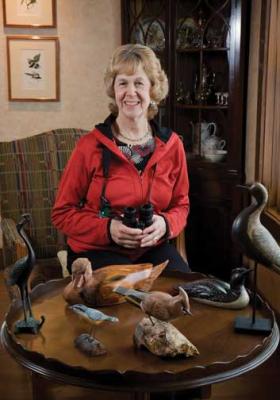 Feather follower: Merrill is surrounded by bird life. Photo Courtesy of Corey Kopischke.    When you visit Nancy Merrill’s West Routt ranch house, the first thing you notice are the crosculptures lining the gate across the driveway. If that doesn’t give away Nancy’s avian passion, perhaps the wooden eagle bench on the front deck will … or the six busy bird-feeders.    Nancy and her husband, John, started coming to Steamboat to ski in 1988. “Then we started coming out in the summer, and that’s when we really fell in love,” Nancy says.     Hoping to build a home in Routt County and save valuable wildlife habitat at the same time, the Merrills worked with the Nature Conservancy to identify a piece of land that would work for both. The land they found came with a halfbuilt barn along the Yampa River, not far from the Carpenter Ranch, a working spread owned by the conservancy. “You could turn the former owner’s dream house into your dream house,” the real estate agent suggested to Nancy. (Of course, it wasn’t that easy.)     John went along with the plan – “He’s not a birder but he’s a good sport,“ Nancy says. With advice from the Nature Conservancy and grant money from several sources, the Merrills began restoring the wetlands. One thousand native trees were planted along an old river oxbow, and the banks were reshaped to deter erosion. In 2003, the Merrills placed a conservation easement on the property.    “This was a family project,” Nancy says. “It’s a small thing we could do to protect what we think is the most gorgeous spot on earth for future generations.”     The birds appreciated the Merrills’ efforts too. Nancy has counted more than 130 species on the property. “Probably the premier one is the sandhill crane. It’s the oldest species of bird, and it’s very adaptable,” she says. Sometimes as many as 100 of the large, prehistoric-looking cranes stage an evening flight there.     Nancy has also spotted blue herons, bobolinks, lark buntings (Colorado’s state bird), hummingbirds, eagles, rosy finches, swallows, great-horned and short-eared owls, osprey, rough-legged and red-tailed hawks, ravens, kestrels and northern harriers.    Nancy, one of the founders of the Yampa Valley Birding Club, leads bird walks on the Carpenter Ranch and for Yampatika, proving that this bird expert has found a way to flock together with the creatures she loves. For more information, call Yampatika at 970-879-9151 or the Carpenter Ranch, 970-276-4626Best in Sho- Mariane Sasak 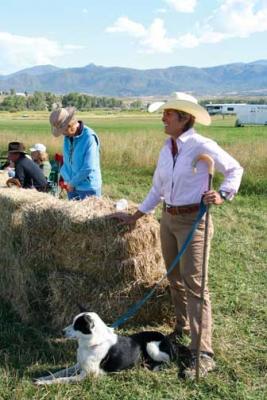 Mariane Sasak preserves Routt County culture through dog trials. Photo by Corey Kopischke,     Mariane Sasak, horsewoman, entrepreneur, rancher and stock dog enthusiast, speaks passionately about the need to preserve the agricultural way of life in Routt County.     To back up her commitment to that preservation, she founded the Steamboat Stock Dog Challenge.     “I think it’s so important, with all the changes in our community and the type of people who are moving here, that we give them opportunities to learn about agriculture without preaching about it,” she says. “(The Stock Dog Challenge) helps people understand ranch rules, that cattle and sheep are still important to our community, and to promote cooperation and understanding between the ranching and urban residents.”    Mariane first sahandlers working dogs at the National Western Stock Shoin Denver. Intrigued, she wanted to knomore, and she thought other people in Routt County might, too.     That led to the first Steamboat trials in 2003. Today, the event has reached maximum capacity: 75 dogs per trial, with two trials over the three-day Labor Day Weekend.     The Stock Dog Challenge is run by volunteers and more are needed. “I could really use help setting up and tearing down. It requires strength, but no special skills,” she says.     “The Steamboat trial is a first-class event and Mariane does a great job making it successful,” says Mike Meredith, a California dog handler.     Mariane has also improved her own dog training technique. To hone her animal’s skills, she works with “rentals,” a neighbor’s sheep that she pastures on the Sasak’s ranch in rural Routt County. “I prefer the work to the competition,” she says. “But the competition shows you where your weaknesses are. I still get the jitters.”     Like so many Steamboat locals, Mariane moved here for a year after college, before she got a “real job.” That was in the winter of 1982/83. “It’s been the longest year of my life,” she quips.           During the ski season, she runs Steamboat Ranchwear, a mobile western clothing shop travelling throughout the West to different cowboy conventions while her husband, Larry, runs Sasak Trailers in town.    “I kind of go in a lot of directions,” she says. Fortunately for her dogs, Dirty, Dot and Annie, she likes coming home, too.
Article Gallery [3 Images] Click Any Image To Expand