A look back on the Energy and Green Building news from 5 years ago. What are your thoughts? We want to hear from you. Please comment in the section below. These articles were originally published in July of 2007.

Does Routt County have a gusher? Developers say there’s oil in them there hills

Stories in the Steamboat Pilot during the 1920s hailed one gushing gas well in the ToCreek anticline between Steamboat Springs and Hayden “a wonder.” Now, Australian oil and gas developer Comet Ridge Limited is actively rediscovering, and re-drilling, for Routt County oil.

With 9,000 leased acres in the Tow Creek formation, Comet Ridge managing director Andy Lydyard estimates there were 200 million barrels of oil in those hills and only six million were removed during last century’s speculation.

Andy says there are “numerous of these (areas) floating around in Northwest Colorado” and his company wants to use Tow Creek as their shining example. Comet Ridge has two wells in place so far, having been initially “met with a high level of unenthusiasm” by local landowners. But Andy says Routt County’s permitting process was daunting, and that will ultimately make for better development.

The hardest lesson they’ve learned so far in drilling their mile-deep wells is that “operating in winter is a no-no.” Caught in a notorious Routt County snostorm, they got stuck at about 5,300 feet in a well last winter and will have to re-drill it this summer. “We’re not doing that again."

During a gas boom, it’s hard to let a sleeping nuke site lie. Plans to drill near the remains of experimental nuclear blasts in Northwest Colorado stir passionate opposition, but a Texas-based energy company’s quest to extract gas near ground zero remains undeterred.

As part of the government’s Project Plowshares program to find peaceful uses for nukes, Project Rulison was a 1969 experiment to release natural gas with a 43-kiloton underground nuclear explosion near the town of Parachute, a couple hours southwest of Steamboat Springs overlooking the Roan Plateau.

In 1973, three similar 33-kiloton nuclear explosions, called Project Rio Blanco, were set off closer to Steamboat in the Piceance Basin, near Meeker. Designed to release natural gas from the tight sandstone geologic formation, crews drilled more than 8,000 feet into the earth, used cables to lower the long, skinny, uranium-filled fission bombs into the bottom of the wells, then detonated them. The natural gas released from these nuclear explosions was radioactive and the wells were ultimately sealed, remaining undisturbed for three decades.

But in February 2004, a gas exploration company called Presco, Inc. announced plans to drill next to Project Rulison. Under public pressure, the Colorado Oil and Gas Conservation Commission established a half-mile no-drill zone around the blast site for further study. Presco’s applications to drill have since stalled as the Department of Energy (DOE, formerly the Atomic Energy Commission that partnered with industry to shoot the nukes) undertakes a complex computer model to study the danger of radioactive materials escaping; but Presco continues to try to convince commissioners to drop the half-mile barrier. If the commission agrees, Presco intends to resubmit its application, followed by many more—slowly encroaching by 500-foot increments to drill as close as 1,000 feet from Project Rulison, Presco V.P. Kim Bennetts says. 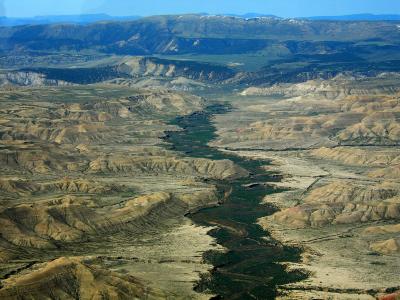 The Department of Energy study is due to be finished sometime next year. Meanwhile, local county commissioners have officially opposed any drilling inside the half-mile mark. As a target for gas exploration, the gas-rich Bureau of Land Management property surrounding Project Rio Blanco is not far behind.

At a energy summit held in Craig, Mike King, deputy director of the Department of Natural Resources, warned the crowd that gas permitting processes may be getting more streamlined around the state, but permits to drill near Project Rulison would be “the polar opposite.”

It could be a victory for Northwest Colorado citizens’ groups, where local outrage is palpable. “I understand those people want to make money. But there was a bomb three times the size of Hiroshima exploded there. They keep saying it’s safe but what if you’re wrong?” Grand Valley Citizens Alliance President Duke Cox says. “We don’t think they’ve made the case.”

The best place to study the green building movement is the library. So shouldn’t this learned place be the best example of a green building too? Steamboat Springs’ library expansion – slated for 2008 completion – will become the city’s premiere environmentally-friendly structure, adding almost three times the space of the current facility. The last time the Bud Werner Memorial library was remodeled, none of the staff had computers and the Internet was a military tool. And green and Gore had yet to become synonyms. “One of the goals of the site plan was to retain as much green space and trees as possible,” says Chris Painter, the Library’s director.

“Little Toots Park and the core trail along the Yampa River are key features of the plan. It quickly became apparent that a significant increase in building density at the lovely park setting was undesirable.” City council identified a nelocation for the library’s next-door neighbor, the cramped Lincoln Park Community Center, home to the Routt County Council on Aging, American Legion and used by numerous groups.

And with voter approval of an $11.4 million bond issue in 2005, plans for a nelibrary could move forward. Chris says community and board sentiment pointed toward an environmentally friendly design and became convinced of the feasibility herself after learning more about the importance of “green building” in preserving the environment. “The reasons made so much sense to me. The whole notion of sustainability, using fewer resources ensures that the library itself will remain vital over time. The idea that the library would be consuming massive amounts of resources ongoing is a serious concern,” Chris says.

Library board member Barb Ross concurs: “The library is a bastion of information and knowledge and should be a place to set a standard (for environmental practices).” The contemporary addition will include double the shelf space for books and other media, spacious reading areas with large, south-facing windows, meeting and study rooms, a larger teen space with computers, interactive children’s library with an aquarium, an outdoor reading deck overlooking the Yampa River, and a coffee shop. Public art will also be designed into floors, stair railings, windows and landscaping. Native trees and grasses complemented by ornamental shrubs and sod will create park areas and gardens surrounding the building. “The library has the forethought to accommodate growth and be at the forefront of the green movement,” says library patron Jennifer Fernley.   The approximately 25,000-square-foot addition will be built to the U.S. Green Building Council’s LEED (Leadership in Energy and Environmental Design) Silver rating, becoming the first LEED-certified library in Colorado. To attain this level, architects with Minneapolis-based Meyer, Scherer & Rockcastle and local architectural representatives at West Elevation Architects are adhering to a rigorous LEED checklist specifying a sustainable site, water efficiency, use of eco-friendly materials, as well as indoor environmental quality.

The super-efficient natural gas heating system will be enhanced by photovoltaic equipment donated by the Trappers Lake Chapter of the Sierra Club. Other key construction components include use of low-emitting materials such as carpet tiles made from 100% recycled nylon and cork flooring; energy saving features like natural lighting, compact fluorescent and motion sensitive lighting; using recycled and regional materials; and reducing construction waste. “It’s a balancing act between cost and efficiency,” says Vanessa Sethi, a LEED-accredited architect of MS&R who estimates payback for additional LEED costs to be five to 10 years.

The new community center, under construction at the Stockbridge Transit Center west of downtown, will also be LEED-certified. “We need to be forward thinking and build municipal buildings with an eye to the future in terms of energy use and efficiency,” says Steamboat Springs City Council member Steve Ivancie. Even as times change, some things remain the same. Longtime library advocate Karen Jimmerson says the library is part of the community’s heart and soul. Through vision and commitment, Steamboat’s new LEEDing-edge library will continue to be a welcome place to gather.