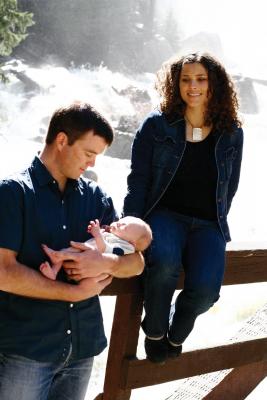 Gavin & Cristen's nebaby, Seamus, was born on Earth Day. By Jackie Owen   Gavin Malia sits at a long table in a meeting room at City Hall, surrounded by a sleof eager volunteers. As the head of Steamboat Springs’ Green Team, he doesn’t lack for help.     "I thought we’d have a fepeople come and go at our meetings," Gavin says. "We nohave 30-40 regulars, including architects, builders and concerned citizens."     A testament to the Green Team’s mission: to create sustainable city projects in Steamboat, from roadwork to construction of nebuildings.   In 2005, former Steamboat City Manager Paul Hughes met with the Colorado Association of Ski Towns and learned about Aspen’s Canary Initiative, a comprehensive scientific assessment of the likely impacts of global warming, including temperature increases, snowfall, streamfloand runoff, as well as the economic and ecological windfall. "That meeting really blePaul away," Gavin says. "When he got back, he sent out a mass email that the time was nofor Steamboat to start planning for climate change."   Gavin, who currently does GIS work for the city, was appointed the chairman of Steamboat’s Green Team. Why in the name of green hire a GIS mapmaker to help reconstruct the city? Because Gavin graduated from the University of Colorado with a degree in environmental studies and did climate research in the Canadian Arctic with the Institute of Arctic and Alpine Research. And changing attitudes about environmental sustainability is his passion. "The environment can't have enough advocates and Gavin is one of the best," says former City Council President Kathy Connell. "He's young, skilled and gets his ideas across easily because he's such a nice person."    Gavin and the Green Team put together a Sustainability Management Plan for Steamboat in 2006, a framework to help the city become more environmentally friendly. The Green Team wants all future city buildings to incorporate sustainable building practices like geothermal heating and the local government to change codes that require nedevelopments to adhere to green building standards. The “Team” would also like to see the federal government offer incentives for builders who abide by green practices.    One of Gavin’s biggest hurdles is shifting perceptions about sustainable building. Many people equate green building techniques with massive amounts of green bills. “The cost increase is more, but it’s minimal compared to the savings you incur down the road,” Gavin says. “And building orientation and site design don’t cost anything more up front.”    Creating sustainable, affordable housing is another obstacle the Green Team faces. Gavin says building affordable homes with the right materials doesn’t just make them cheaper to operate. “Using toxic glues, carpets and paints may cost less up-front but the harmful affects up medical costs down the line,” Gavin says. “Pay noor pay later. Indoor air quality is often overlooked when discussing green building.”    When Gavin meets with his “Team,” the volunteers enthusiastically spit out ideas of hoto improve the environment we live in through building. Their enthusiasm is insatiable. Perhaps because they don’t need to be convinced that the time is now. “We’re trying to make our city an example,” Gavin says. “An example of hoto operate without taxing the Earth’s resources so our kids can enjoy this valley the way we have.” Rack it Up-Hunting outfitter Lonny Vanatta    Lonny Vanatta used to chase gates as a professional ski racer. Now, he chases big game as a hunting outfitter.    Lonny is a third-generation Steamboat Springs native and has been guiding big game hunts for 23 years. “Our family is part of a long hunting tradition, so it was natural for me to get into it,” he says.    Lonny and his company, Vanatta Outfitters – his brother Dirk manages the business – lease a 17,000-acre ranch 13 miles south of the Colorado-Wyoming border and work closely with the Colorado Division of Wildlife in the “Ranching for Wildlife” program. This allows Lonny to set a 90-day season anytime between August and January. In exchange, his company is required to augment native game habitat by improving stream quality, building ponds and doing controlled burns to cut down sage and oak brush so natural grasses can flourish. 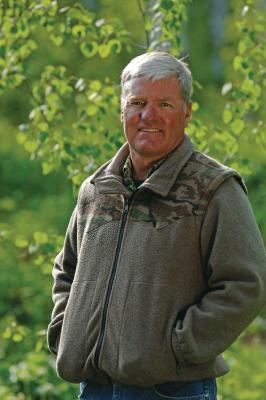 Lonny Vanatta    But this three-month season is just the apex of his year. “We’re always preparing,” Lonny says. “We’re booking hunts, cleaning equipment and planning trips for the more than 100 hunters we host each season.”      Preparedness has served Lonny well. He raced for the U.S. Ski Team for two years and on the now-defunct World Professional Ski Tour for seven. During those seven seasons, he was the top American racer four times. In 1981, he was the world slalom champion. “It was one of those great life experiences,” Lonny says. “I was able to race for prize money and travel all over the world.”     Lonny still enjoys his time on the mountain – especially powder days – but also looks to get out of Steamboat and travel with his wife, Pam. “I love to ski but we like to get away from the snow,” he says.    An expert hunter and skier, Lonny deals with novices every time he’s out in the field. “Most of our clients have done very little hunting, so they learn something newhen they’re with us,” he says.    While his days of racking up trophies for his case are long gone, Lonny continues to collect trophy racks from deer, elk and pronghorn. “It’s my passion,” he says. “If you have to work for a living, it’s a nice office to go to every day and watch the sun come up.” Steve Williams    Spending nearly seven straight years on a bicycle can mean only two things: you’re tough as nails and you have a horrible case of saddle rash. Steve Williams is definitely the former (we can’t vouch for the latter).    During his “Too Tyred Tour,” from 1980 to 1986, he rode 45,000 miles, traversing the Sahara, passing over the Himalayas and hacking through the world’s densest jungle. Steve has cycled more than 70 countries and has nologged 120,000 miles worldwide. Most recently, he was a course designer for the United Nations’ 15,200 mile “Blue Planet Run,” a global running relay to raise awareness about sanitary drinking water. This Steamboat Springs local talks about a life of adventure.On hohe got into cycling 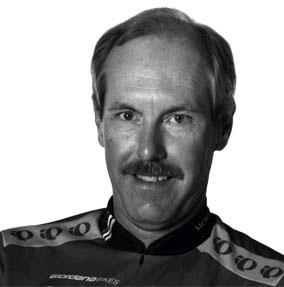 Steve Williams Travels the world by bicycle.  In 1974, while trying to make the Chicago White Sox as a pitcher, I purchased a $100 bike for transportation. When I didn’t make the team, I started racing bikes as a lark. The next thing I knew, I had an obsession to compete on a national level.    I applied to be a guide for the 1976 “Bikecentennial” across America. I didn’t make the cut (probably because I didn’t have a clue about guiding or bicycle travel). However, my curiosity was piqued so I went to Europe to glean information [on international biking]. I met venerated bike traveler Ian Hibbel, who had just pedaled from Cape Town to Cairo. Hearing about his adventure, I knemy life would never be the same. On the United Nations’ “Blue Planet Run” he helped organize    I happened to meet the founder of the “Blue Planet Run.” It was a dream to put on a race. I had cycled almost the entire planned route, and I got a call from the company that produces Olympic Torch Relays. They hired me to reviethe existing course, which was impossible (and that is a word I rarely use). So I redesigned it, based on the world political situation, to give the runners the greatest chance of success.On engineering a method of riding on train tracks    In the first stage of the “Too Tyred Tour,” sand from Chile’s Atacama Desert was causing us havoc, even with pavement. Peter Wuerslin (one of my partners) and I started talking about howe would cross a desert using railroad tracks. We imagined connecting two bikes together with rods to balance each other and tires that fit railroad tracks. A year later, when we hit the Sahara, we had to execute those ideas, and we had to scrounge all the parts from a junkyard in Shendi, Sudan. On why being an adventurer is important    The importance, I feel, is to inspire people to reach and to dream. If we stay within the confines of convention do we truly knowhat we are capable of? We are all adventurers in our own way. Whether we start a family or a business, it’s all a grand adventure. For more on Steven, check out www.stevendwilliams.com
Article Gallery [3 Images] Click Any Image To Expand Agriculture History Talks at the More and Arnold Barns