A tour of Steamboat Springs' boldly colored Victorians    Google “painted ladies” and you might find a Web site for a Sports Illustrated swimsuit issue. But scroll down the page and you’ll see painted ladies defined in architectural terms as lavish Victorians dressed up in elaborate colors with gingerbread trim and dainty ornamental features.     These lavish homes have graced Colorado’s towns and cities since the state’s early mining days, setting high architectural standards. Many were constructed by homesick transplants who struck it rich during the Western boom of the mid-1800s.   Homeowners today are still inspired by these historic beauties. Meet four local families whose own colorful Victorians pop out in Old Town, adding charm and character to our community – and are close enough in hue and style to earn the distinction as Steamboat Springs’ own “Painted Ladies.”    For Dr. Kristin Wilson, a family practitioner at the Steamboat Medical Group, her roots run deep at the Seventh Street rose-colored Victorian she shares with her husband, Keith, and their three small children. The house has been in her family four generations. Her great grandfather built it around 1910. “Both my grandfather and father greup in this house,” Kristin says. “In fact, my dad was born next door when the old high school was a hospital.” 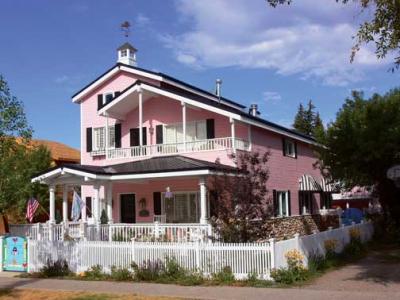 Beetle Juice: Janice and Richard Petry's Old Town Home. Photo courtesy of Ken Proper.     Even though Kristin and her older sister, Lisa, greup on a farm west of town, they spent much of their time at their grandparents’. “I always remember this place being red,” she says. So when the opportunity came for Kristin and Keith to buy the house from her family years later, they jumped on it. “And we had to paint it red,” Kristin says.     That’s not all they did. Keith, who works in construction, spent 18 months remodeling the house inside and out. “Kristin had a lot of memories here,” Keith says. “So she yelled at me every time I knocked a wall down. And I knocked down a lot of them.”     The final outcome is impressive. An arts and crafts-style living room is accompanied by a huge country kitchen – complete with grandpa’s kitchen table – four spacious bedrooms and a beautiful formal dining room – painted red, of course.    It’s the passing of tradition that most excited Kristin. “My sister and I greup playing dress-up with my grandma’s clothes in this house, and we just loved running around the neighborhood,” she recalls. “It was a wonderful place to group and nowe’re raising our kids here.”     “When we first sathe house, it had been repossessed and sat empty for almost two years,” Whale says. “It had a really ugly stain and royal blue paint that was peeling off and the grass was up past your knees. The kids thought it was haunted. They called it the Beetle Juice house.” But the couple sapotential in the home, which was built in 1974. “Everybody thinks it’s older but it just has that Victorian style,” Janice says. “We decided to go with it.    We bought books on Painted Ladies and visited Georgetown to get ideas on what to

do. They have great Victorians there.” The couple came back with purple on their minds. “We hired a professional painter, which was the smartest thing we could have done,” Janice points out. “It would have been a tough job the first time around. Nowe just do the touch-ups.”    Another piece of advice the couple offers regarding paint: “Remember the color you pick looks a lot different on a house than it does in a can,” Janice says. “When we saw hopurple this place was, we were glad the painter suggested a shade lighter than our original choice.”

Just down the hill from the Petrys’, you’ll find a pink beauty with Victorian flair owned by Chip Shevlin and Barbara Walker, both local ski instructors. Their home, like the Petrys’, looks a century old. But look closer and you’ll be surprised. “This house arrived in Steamboat 12 years ago, shrink wrapped, on a truck, and in four pieces,” Chip says. “Infact, part of the roof was knocked off when thetruck transporting it drove under a bridge.”     Inspired by a 100-year-old Victorian they restored themselves in their native NeJersey, Chip and Barbara, who were moving to Steamboat at the time, spent countless hours on the phone and fax, designing their nehouse with the Kansas-based modular company Heartland Homes. “We loved our Victorian in NeJersey and we wanted to make our Steamboat house similar,” Chip says. “After it was built, the company liked it so much they made it one of their models.” 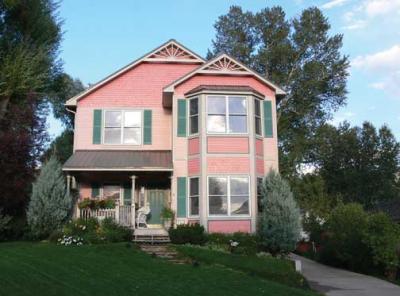 Does this look like a modular to you? Chip Shevlin's and Barbara Walker's Broad Street "Lady"    A modular home takes a lot less time to build. The house was started on the assembly

line on Labor Day of 1994 and arrived in Steamboat roughly eight weeks later.    Once in Steamboat, the couple “dressed up” the outside of their neVictorian with two shades of pastel pinks, fish scale trim around the bay windoand moldings

around the exterior windows and doors, which adds to its charm. You would never guess it’s a modular. “We have a terrific location that gets sun all day long and we love our decks and the open floor plan,”    Barbara says. “It’s great for entertaining.” Pink seems to be en vogue in Steamboat. The “Lady” on Seventh Street bursts off its foundation with a pink resembling the Pink Panther. Owner Laura Bischoff was always first to poke fun at the color of the house. “My sixyear-

Kids clothing store. “It’s definitely pink. We tried not to take it too seriously.”    She even dubbed the residence “Casa Flamingo,” a name that inspired her first annual Flamingo Flocking – a flamingothemed house party. “If a pink flamingo appeared in your front yard last summer, you were invited,” Laura laughs. 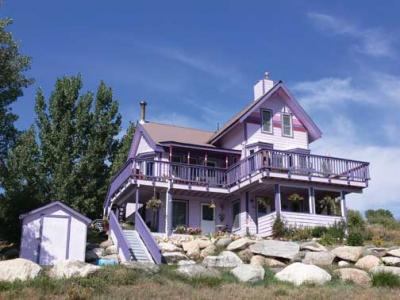 Laura Bischoff dubbed her home "Casa Flamingo". The interior is as colorful as the outside, decorated with her "whimsical" style. Photo courtesy of Ken Proper.Laura relocated with her young daughters from the Washington, D.C., area three years ago. “After 9/11, I just wanted our family to live the small-town life,” Laura says. “I think Steamboat is one of the last towns around that still offers that. I wanted a little Victorian with a big front porch and a white picket fence. Downtown, of course.”

While the move to Steamboat was no problem, finding the right house was. After

a lengthy search, she settled on a home that Laura fondly describes as “a really horrible

downtown dump.” She bought it and spent the next year having it remodeled. Noa

whimsically painted gate reading “Life is Sweet on Seventh Street” greets visitors as they walk past the white picket fence and up the front porch.   Laura describes the outside of the house as “beach Victorian,” but the inside is a mix of modern contemporary and folk art. “Our house in Washington, D.C., was a serious house,” Laura says. “Serious art, serious everything. Here we wanted it to be more of what we’re about.”    With cozy wood floors, classy granite counter tops, chandeliers in the bathroom and a television hidden behind a mirror in the living room, Laura created a fun home that felt like a natural place to raise three girls. Hand-painted furniture added spice and color to the home’s more grown-up side. 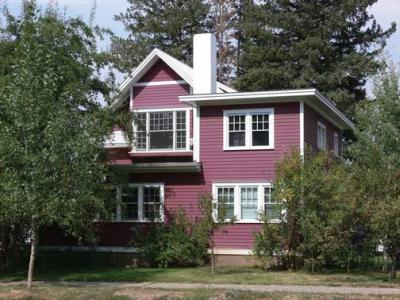 Dr. Kristin Wilson's "Lady" is also on Seventh. Photo courtesy of Ken Proper.     So while Steamboat’s “Painted Ladies” may vary from the original, their character and creative design secures them a place among the town’s unique architecture. And you won’t ever catch them adorning a swimsuit issue.