Summertime in the Yampa Valley means boating of every kind    The scene is quintessentially Steamboat Springs. The early June sun warms the boulders at river’s edge, drawing a crowd of locals and their dogs, who chase sticks in endless circuits: shore, water, shake, repeat. 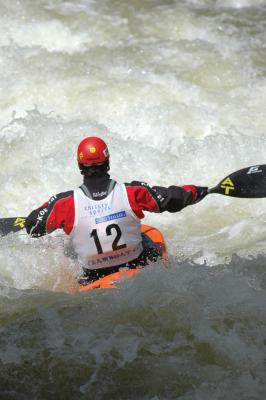 Professional kayaker Jay Kincaid competes during the 2006 Fish Creek Race. Photo courtesy of Jeff Moag.  The twin eddies girding this downtown stretch of the Yampa River are crowded with whitewater kayakers taking turns in the C-hole, a massive pile of frothing water that draws paddlers like moths to a flame. Noa driftboat approaches through the Class III rapids. The angler in the bohas a fish on, and the guide at the oars wears a look of nonchalant confidence. The fisherman’s concentration never wavers as the craft barrels toward the kayakers and the huge white wave. The driftboat splashes through the hole and careens into the eddy below, where the man lands his rainbow, holds it aloft to the appreciative crowd and then releases it back to the rushing Yampa River. It’s summertime in Steamboat.     The thick blanket of snothat makes Mount Werner our winter playground begins to rush off the mountain in May, filling streams and reservoirs throughout the Yampa Valley and providing winter-weary skiers and boarders a nekind of recreation: boating of every conceivable type. Steamboat boasts a vibrant summer boating scene. But more than the water, it’s the characters that make Steamboat’s water scene unique. Float FishingOne of the best reasons to float the rivers around Steamboat Springs is to enjoy the great fishing they provide. The Yampa Valley is justifiably famous for its rich trout and pike fisheries, and float fishing is a fantastic way to access them, says Steamboat’s John St. John, whose local company, Hog Island Boatworks, produces the planet’s only plastic driftboats.    Johnny is one of the last people you’d expect to meet in a ski town. Start with his country accent, still sounding like center stage at the Grand Ole Opry, 25 years after he left Memphis. “Ten days after high school graduation, I was in Junction with my kayak,” he says. “I started with whitewater guiding, and it kind of mutated into fishing and floating for a hunting and packing outfitter in Wyoming run by a real cowboy, Chancey Wheeldon. In fact, he was the 1972 saddle bronc champ at the National Finals Rodeo.”    The Yampa and Upper Colorado are perfect driftboat habitat, so it’s natural that Johnny settled in Steamboat after a stint at his family furniture plant gave him the production skills to make plastic driftboats, and a twist of fate gave him the chance. Johnny’s stepbrother worked for the company that molded large plastic boats for a Disney ride – a manufacturing first that gave them the idea to try molding plastic driftboats. And Johnny, with experience in float fishing and manufacturing, made it happen. He founded his own company, Hog Island Boatworks, in 2001.    Though the rivers get most of the press, don’t overlook the fishing at the reservoirs around Steamboat. Stagecoach Reservoir, 14 miles south, gave up a state-record northern pike just last fall. “We manage it as a trophy pike fishing venue,” says Stagecoach State Park Manager Craig Preston. “The record pike was 46 inches and 30 lbs., 11 ounces. Since then, we’ve had a couple more that were 47 inches and released. So it’s a good bet we’ll have another record-breaker this year.” Stagecoach is king for pike, but other local lakes boast excellent trout fishing, including Steamboat and Pearl lakes to the north, and Yamcola and Stillwater reservoirs in the Flat Tops to the south.Sailing    You wouldn’t expect to find a sailing scene 7,000 feet above sea level, but the Yampa Valley’s two large lakes play host to a dedicated sailing community. 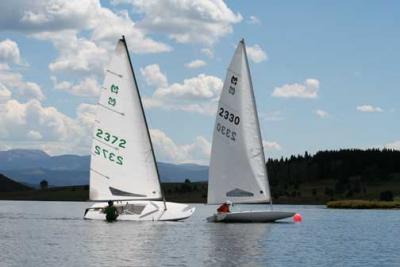 Competitors at the Steamboat Scowboy Regatta set up for the crux turn. Photo courtesy of Kris HammondBoth Steamboat Lake and Stagecoach Reservoir sport full-service marinas and a handful of sleek sloops, though many mountain sailors prefer the speed and responsiveness of small catamarans. That’s  because in Northwest Colorado’s mountain lakes, they never knowhat to expect. “The wind can shift 180 degrees in 30 seconds,” says Steamboat resident Jay Kinghorn, who greup sailing in the consistent sea breezes of Cape Cod. “One day at Stagecoach, it was as windy as I’ve ever seen it. We got the boat rigged and made one great run before the wind died. We had to paddle in.”    Dealing with shifting winds is just part of the Steamboat Scowboy Regatta, an annualsailing event at Steamboat Lake that features 16-foot, flat-bottom sailboats. Every August, a group of sailors from all over the country meets at Steamboat Lake Marina to socialize, talk boats and race. “Everybody loves to compete,” says organizer Harv Holtzman. “But it’s also a big campout. We bring guitars for the evening, tell stories, share information and get together in a beautiful place.”

The race runs across the lake and back, weaving in and out of several small islands, and if the winds are wild enough, wipeouts happen. “It’s usually a self-rescue thing,” Harv says. “But if someone needs help, you forget about racing and make sure people are safe.”MotorboatingThe area’s growing number of waterskiers and wakeboarders is happy to exploit

windless days. Choppy waters matter less to the wakeboarders and wakesurfers who now

dominate the motor scene at Stagecoach and Steamboat reservoirs, but glassy smooth water remains to lake riders what light powder is to snow riders: pure bliss. And in contrast to more densely populated parts of Colorado, there’s still plenty to go around in Northwest Colorado.    “I’ve been waterskiing since I was a kid,” says Jeremy Kassib. And although he moved to Steamboat for snow, he wasn’t about to quit waterskiing or his newater- and motor-powered sport, wakeboarding, just because he didn’t have the requisite motorboat. Jeremy, who works as a massage therapist at the Yampa Valley Medical Center’s sports medicine clinic, knethat a water-rat with the right skill set can always find a way onto the lake.    “If you knohoto drive a boat, people are always willing to take you,” he explains. “But after a feyears, I got tired of begging and I had a little money. So I went in on a boat with a couple of buddies. We love it. It gives us something to do in the summer.”    Jeremy, a snowboarder, says wakeboarding is a lot like snowboarding in powder. “The fundamentals are the same. The only difference is the rope.”White River Rafting and Kayaking    The Yampa Valley doesn’t boast the biggest or wildest rafting rivers, but this quiet corner of Colorado is ideal for family river trips. And the gnar is only an hour drive away, with the Colorado River’s Gore Canyon to the east and the Yampa’s Cross Mountain Gorge to the west. 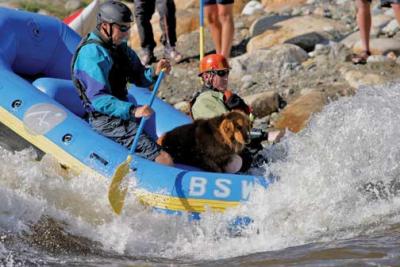 Face Shot: Kent Vertrees and Todd Dills plug the Yampa River's C-hole. Photo courtesy of Corey Kopischke.“The Elk River is our bread and butter – Class III fun for the whole family,” says Jarett Duty of High Adventure Rafting in Steamboat. Kids as young as six can enjoy this short trip through the towering conifers of the Elk River Valley. “They get plenty of boshots and no flipping,” Jarett says. The round-trip from Steamboat takes less than three hours and features about an hour of action packed rafting. Several companies operate out of Steamboat, creating a healthy guiding community as many of the river bums cross over from winter ski guiding at Steamboat Powdercats or

Steamboat Snowmobile Tours. “We help each other out on the river, no matter what company we’re from,” Jarett says. “People get off work at night and they come hang out at our garage and talk about the day. Plus Thursday night at the Smokehouse is pretty much the weekly guide party.”    Kayakers are known to get in on the party, too, and they abound in Steamboat – with good reason. When the water levels are just right, the Yampa River in downtown Steamboat provides some of the best kayak playboating in Colorado. The kayaking season runs from mid March to late June, and peak floon the Yampa means Fish Creek has awakened from its ice-locked slumber – the signal for Steamboat’s creof Class V kayakers to

convene on this world-class whitewater creek that empties into the Yampa between the ski area and downtown Steamboat. Kayakers make the most of the liquid locomotive, running from Fish Creek Falls to the Yampa on their lunch breaks.    Here you’ll find young enthusiasts like 21-year-old Kevin Dombey, a semi-professional kayaker, sharing eddies with the likes of Scott Gerber, 57. It’s an eclectic group to say the least.Tubing It’s not exactly a boat, but what would a Steamboat summer be like without tubing? For a feweeks in July and the beginning of August, the Yampa River downtown is a recycled 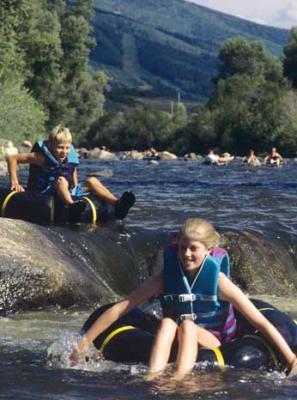 Tube Culture: Zach Perkins and Colleen McCullough float the Yampa River. Photo Courtesy of Ken Proper.The mountainsun provides plenty of warmth, while the river itself is refreshing but not bonenumbingly so, as it can be during the height of the melt.

For Jasper and Sierra Good, it’s the season they live for. No school, no commitments.

Just tubing. “It’s one of my favorite things about living in Steamboat,” says 10-year-old Jasper. “I like being with my family and going through the holes.”   Kids in tubes might look like they’re just drifting, but tubing is a science. If you plan far enough ahead and don’t misread the water’s tell-tale signs – small ripples mean rocky shallows; larger standing waves foretell a thrilling roller-coaster ride – a felanguid strokes is all it takes to ride the current’s magic carpet. “When it’s shalloyou use your feet and when it’s deep you use your arms” says 8-year-old Sierra. “It just takes some practice.”   Tubing can be a half-hour float downstream from the Ninth Street Bridge to the C-hole near the library, or, if you have your own tube, a half-day excursion from Fetcher Park on the east end of town. And whether you take out there or not, stop at the C-hole. The kayakers will be gone this late in the season, but the warm rocks will be covered with a happy crowd of tubers, tourists and locals with their dogs, still chasing sticks.   Shore, water, shake, repeat.
Article Gallery [4 Images] Click Any Image To Expand