SAM'S Club       It’s a sad day for a community when the work of a significant local artist leaves the area, piece by piece, until one day, visitors to the Smithsonian can vieit while the artist’s hometown neighbors can only see reproductions. 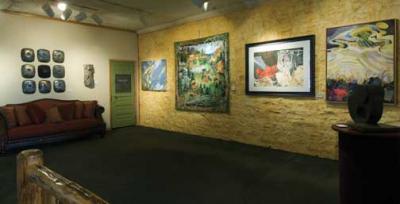 A vieinside the Steamboat Art Musem. Photo Courtesy of Rod Hanna.    For more than 100 years, the Yampa Valley has inspired artists, many of whom have influenced the course of art in the West. Now, their work could one day have a permanent home at the newly opened Steamboat Art Museum.    SAM, as the museum has been dubbed, is the brainchild of artist/gallery owner Shirley Stocks and artist R.C. Dieckhoff, whose work does, in fact, hang in Washington, D.C. – at the White House.   “We’ve had conversations for years about this,” R.C. says. “What first struck me was what a museum can do for an artist. So many artists have passed through the area in the past, and not been able to stay here. There just wasn’t the industry here to support them.”    SAM came together following the death in 2004 of Helen Rehder, an artist and long-time Steamboat Springs resident who left her historic building on Eighth Street and Lincoln Avenue to the city. Her only requirement was that it be used to house a museum.     “It’s a fantastic connection,” R.C. exclaims. “It’s like a Hollywood script!” The museum opened its doors Dec. 23 last year. “We had two weeks (from the time the city signed the deal with SAM) to clean the building, paint it and get a shohung,” says Shirley.     The museum’s nehome is not yet permanent. The organization has a six-month lease with the city, after which local officials expect to finalize plans for its renovation. The estimated cost of bringing the interior of the building up to standards for housing a museum-quality exhibit is $2 million, which the SAM board will need to raise within a couple of years. In the meantime, SAM is planning a summer exhibit that will feature intaglio works, including art from the locally owned and nationally acclaimed Riverhouse Studio, etchings from regional artist Anna Marie Moore of Walden, plus pieces from private collections and local artists. For more information, call (970) 870-1755.NeWorks Take Camp to NeHeights

Two success stories have recently emerged from the NeWorks Festival at

Perry-Mansfield Performing Arts School and Camp.     Two stageworks that came to fruition during these workshops at the Strawberry Park camp are slated for New York productions.    The creators of The Hudsucker Proxy, a witty musical by composer Stephen Weiner and lyricist Glenn Slater, are awaiting the official announcement that their play will soon be on Broadway. Four-time Tony winner Jerry Zaks is scheduled to direct the production. Its

second act, plus two songs, were written during the 2004 NeWorks Festival.     Recently, the Manhattan Theatre Club selected The Receptionist, a dark comedy about office politics written by Adam Bock during the 2006 festival, for its 2007/08 season.    The NeWorks Festival began in 1997 as a professional workshop for nationally known composers, writers, directors and choreographers. During the course of their stay in Steamboat Springs, they work on an original piece for theater, musical theater or dance. Performers at the workshop are cast to perform various roles as the stagework emerges.    “That really is the gift of it,” says executive director June Lindenmayer. “They have professional actors here, acting out their creation in front of them, so they can see what changes need to be made immediately.” At the conclusion of the

camp, the public is invited to attend readings or previews of the neworks.    “Three things intrigue me about the NeWorks Festival,” says co-chair Jim Steinberg. “First, the interaction among the artists of the various disciplines; second, the interaction of the artists with the kids at the camp; and, third, the theater component of the festival. Each of these pieces is selected by an artistic director of a theater who already has an interest in the piece. Each selects a script he has a strong desire to move forward toward a production.”    The 2007 NeWorks Festival, June 14- 17, will feature choreographer Darrell Grand  Moultrie, and works selected by artistic directors AndreLeynse of Primary Stages (NeYork), Marc Masterson of the Actor’s Theatre of Louisville, and Kent Thompson

of the Denver Center Theatre Company. Participants in the musical theater component have not yet been announced.