Tuning Up For Winter Tuning Up For Winter

Everyone knows that Steamboat Springs is known as "Ski Town USA," but it has also been called "The Music Capital of The Rocky Mountains," a phrase coined by Texas music promoter John Dixon after seeing the quantity and diversity of the music that comes here.   This little dot on the Continental Divide has hosted so many national acts that even the most avid local music fans have been known to turn down free tickets to their favorite bands because they couldn't handle another consecutive night of boogeyin'. A rough affliction indeed, but no one seems to mind. 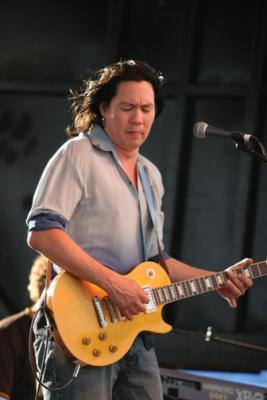 Steamboat's own Big Head Todd; photo by Corey Kopischke  Steamboat has attracted national acts for decades. Long-time locals glaze over sentimentally and revisit too many concerts to count. "It's mind-boggling when I try to think about it," muses local concert promoter John Waldman of Great Night Productions, recalling shows from Greg Allman, Dave Mathews and Bonnie Raitt. He remembers a night at the Old Town Pub when a guy at the bar yelled to his friend, "Stevie Nicks? What's she doing here?" Just then the woman next to John turned around, took her glasses off and said, "Hi, I'm Stevie." She and Mick Fleetwood went on to play a shothat night for a mere $1.05 per ticket.   Steamboat also gets big up-and-coming bands. "Two years ago, we did a free showith Los Lonely Boys that was only attended by about 30 people," recalls KFMU program director John Johnston. "Less than a year later, they won a Grammy for best neartist."Ask around and you'll hear stories about when up-and-coming bands like Widespread Panic played at the Sheraton or Ben Harper performed at the now-defunct Heavenly Daze Brewery.  "We used to look at Polestar and different magazines and call bands going from Denver to Salt Lake," remembers Jan Levy, one of the owners of The Inferno, a favorite local club in the �80s and �90s that hosted bands like Phish, Leftover Salmon and Sublime. "We'd get them with a night of lodging and a ski vacation to play a smaller market."  From small coffee shops to restaurants, bars, theaters and clubs, great local music venues abound.   With all this great music, Steamboat is on its way to becoming "The Music Capital of the Rockies."
In-Print, Culture, Community, Shop+Eat+Drink, Sports, People, Living Photo Ate Brewery

6:30pm · No venue was assigned to this event.
View All Add Your Event