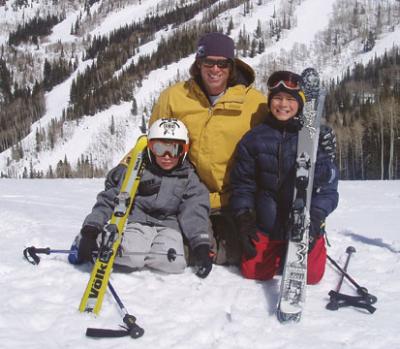 Nelson Carmichael joins his son, Noah left and his nephew, Justin Carmichael, at Thunderhead. Photo courtesy of Jodee Manfred. I started skiing when I was 3, but only a couple times a year. When I was 12, my family moved to Steamboat Springs and I really started to get the hang of the sport. I loved being outside in the mountains and gliding downhill.    I noshare this passion with my son, Noah.When Noah was 2, I put on his ski gear and he walked around the house.   Later, I carried him up a nearby hill, pointed his skis downhill and let him go. He either crashed, or I reached the bottom in time to catch him. When he succeeded there, I walked him up Howelsen Hill and he zoomed down his first groomed run. He still couldn’t turn or stop, but that was OK. As soon as he had enough, we packed up.   Sometimes it was just a feminutes, sometimes an hour. That was fine with me, especially after carrying him back up each time! We didn’t use learning devices like a leash – I figured the less stuff, the better. When Noah was 4, I took him to Mount Werner, and we started riding chairlifts on Headwall. We worked on the famous pizza stance (snowplow), stopping and occasionally turning. He also took a felessons that helped him realize he could ski without Dad.   Later that year, he had his first run down Why Not, a milestone for most kids. That first time took a couple of hours. I held him between my legs or skied with him when the going got rough – otherwise he was on his own. The important things I learned from Noah’s early skiing years were patience and understanding – and to leave when he was ready.  I gave him small tips like hoto stand in his boots with his knees bent, keep his hands forward and look where he was going. Noah soon was skiing, but what he wanted was to snowboard. OK. I took him up the hill, turned him around and let him go. Once Noah realized the edging differences, it was a matter of teaching him hoto turn and control his speed.   I showed him hoto balance on the board’s edge by holding his hands as we traversed the hill. We played with a “J” turn on melloterrain, first going straight and flat, then settling onto the heel or toe edge to turn and come to a stop. After awhile, we connected two “J” turns into his first linked turns. Again, as soon as he was the least bit frustrated, cold, wet or bored, we were done.   When it was time for the big ride up the gondola, we realized that Why Not is too narrofor snowboarding. When the pitch on the upper mountain became too steep, Noah slid down on his heel edge. We worked on turns, keeping his hips and hands in line with his board, knees bent, head up, and maintaining an even stance. Nonine, Noah rides through trees, catches air and goes in the halfpipe. He likes the simplicity of snowboarding, the comfy boots and the wakeboarding feel. He still skis, but usually would rather snowboard. Who knows? He may want to telemark next. Remember that crashing is part of learning, and good body mechanics transfer from sport to sport. Your kids will thank you later for carrying them up the mountain!Ski jumping   The end of the jump is coming. Pine boughs are flying past me like little birds. I begin extending my legs and then I am in the air. My cocked ankles send my skis toward my face. The neon-yellotips startle me; still I push on.   I am at 15 meters, 20 meters, 28 meters. At 32 meters I let up. I smack in a tele landing and glide down the outrun. Satisfaction floods me, and I knoit was a good jump.Later on the podium, while my mom takes pictures and the crowd claps, I imagine the whole world watching me someday win an Olympic medal. But there has been one big problem: up until now, Nordic combined and ski jumping were the only Olympic sports without a female discipline division. 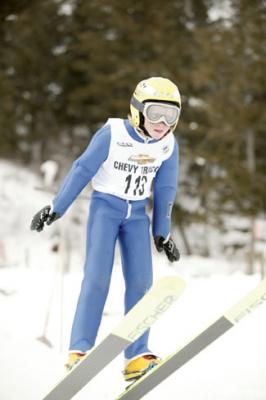 Emily demonstrates her jumping style at Howelen Hill. Photo courtesy of Ivars Mikelsons.  Nordic combined is the combination of ski jumping and skate skiing. Competitors fly off jumps ranging from 10 to 120 meters. Howell a competitor does in jumping determines when she starts in the cross country race � the best jumper starts first. Whoever crosses the finish line first wins. The Olympics includes two men's individual Nordic combined events and one men's team event.Nordic combined and ski jumping began around 1800 at ski carnivals. Oslo, Norway, hosted the first official competition in 1892. The first Olympics to include men's ski jumping was in Chamonix, France, in 1924. A year later, the first World Cup was held. Even though more than 80 years have passed since the sport made its first appearance in the Olympics, women have never been allowed to compete in jumping.  I began ski jumping five years ago when I was 7 years old. I was hooked after my first jump during Winter Carnival's Bumps and Jumps competition. The next year, I begged my mom to sign me up for the Steamboat Springs Winter Sports Club's Little Vikings Nordic combined program. In the past four years, I have moved from Little Vikings to the development program. The thrill of rocketing off the jump still gets my heart pumping. Wind blowing through my hair as I plummet down the hill on wide skis is my favorite feeling.  My teammates and I practice four days a week in the winter. On Tuesdays, we skate ski � usually sprints. The next day, we ski jump. On Fridays, we jump again. Finally on Saturdays, we jump in the morning and skate in the afternoon. All our hard work pays off when the competitions come around.The next closest ski jumps are a five- hour drive away in Park City, Utah. This year, I traveled to Park City for competitions twice and also competed in Steamboat. Most of the competitors are from Park City, Steamboat or, occasionally, Canada. I made it to the podium in all five competitions last winter.  My friend and classmate, Mary O'Connell, is the oldest girl on our team. Although Steamboat's program is the longest running, Team Utah is the best in the country. Lindsay Van, Jessica Jerome, Abby Hughes, Alissa Johnson and Brenna Ellis from Utah also make up Team USA, currently the top-ranked in the world. Lindsay finished second overall and Jessica received third. I can only imagine hofrustrated these women must have been watching the men compete in the Olympics while they could only fore-jump.  Women's Nordic combined was kept from being an Olympic sport because the International Ski Federation (FIS) claimed the sport was too dangerous for women. But recently doctors have said that it is just as safe as women's soccer and basketball.  Last May, the FIS voted to recommend making women's Nordic combined a newinter Olympic sport.  I will not be able to compete in the 2010 Winter Games because I will only be 15. But watch for me in 2014, when I will be 19, a perfect age to compete.  I feel grateful that I might get the chance to be included in the Olympics and I feel sorry for the women before me who were excluded. I can dream of standing atop the podium some day, my cheeks bright red from pride and the cold. Everyone is silent as the speakers blast the words, "And the home of the brave." Take five   The he Steamboat Pentathlon is a great example of hoSteamboater's love variety in their winter sports.   The Howelsen Hill race combines running, downhill skiing, snowshoeing, cross country skiing (classic or skate) and mountain biking. You don't have to be crazy to enter this race but it might help.  "This event really shows the competitive nature of Steamboat. Some competitors are very intense but we also have racers who make this a social event and race at a conversational pace. Everyone has a great time," says Kit Rice, sports coordinator for the Steamboat Springs Parks and Recreation Department. 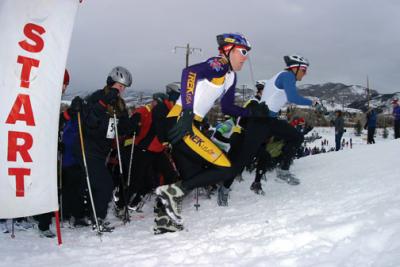 Barkey Robinson takes off from Howelsen Hill for the Pentathlon's five-mile run. Individuals and teams may participate in either the standard 24-mile course or the shorter 13-mile course. Photo courtesy of Corey Kopiscke.  Individual racers and teams choose between the standard 24-mile course and the short 13-mile course. Individual racers do every event while teams divvy up the stages by having members race in their strongest disciplines.Prehab or rehab?   There is no doubt that Steamboat Springs is an active community and most of us don't settle for one sport during the winter. One day it's downhill skiing, the next it's snowboarding, followed by Nordic skiing or a midnight snowshoe romp on the pass. The variety of winter sports can also present a variety of injuries.   A favorite catch phrase heard throughout the Yampa Valley is, "You gotta pay to play." A simple way to avoid "paying" and not miss a single day of your favorite winter sports is to train your body for the sports you love. Create solid core strength. Don't be satisfied with being strong in only one muscle group. Alloyourself time to warm up before you begin your activity and cool down as you finish.   Local physical therapist Nicole Rabanal suggests creating an equal balance between range of motion, strength, and flexibility. "Injury prevention (prehab) is an investment you make to yourself to alloyou to do all your favorite activities for years to come," she says. Nicole suggests ways for avoiding the most common injuries.   Downhill skiers. Knee injuries are common. Warm-up is essential. Many people believe warming up means taking it easy on the first or second run. What you want to do is to slowly increase the temperature of your muscles to increase flexibility, quickness and reduce your chances of injury. "Warm up even before you get on your first chair lift," Nicole advises. Stretch your quads and knees by holding the top of your right foot with your left hand and gently pull your heel towards your buttocks. Repeat with your right hand and left knee.   Nordic skiers and ice skaters. Hips and lower back injuries are prevalent. Pay attention to hip and T-band tightness. Make sure deep hip rotator muscles are stretched and loose. Lie on the floor and pull your knee across your body towards your opposite shoulder until you feel an easy stretch on the side of the hip. Do both sides.   Snowboarders. Whiplash is a common injury. Warm-up should include forward neck circles and light resistance pushes while lowering your chin to chest.   Snowshoeing. Achilles tendon are a weak point. Stand facing a wall and lean on it with your hands. With one leg forward and bent in front of you, place your other leg straight and behind you with both feet flat, slowly move your hips forward. Feel the stretch in your calf and Achilles.   Nicole suggests holding stretches for a femoments while warming up. After you are done with the sport, warm down with more stretches. Since your muscles are warm, hold the stretches a little longer to increase flexibility.Have fun and have an injury-free winter.
Article Gallery [3 Images] Click Any Image To Expand