Courtney Gill-All About The Team    Courtney Gill chuckles as she talks about her role as skating director at the Howelsen Ice Arena. Maybe that’s because she didn’t want anything to do with skating when she moved to Steamboat Springs in 1995.    After Courtney’s last year skating with an East Coast club, she was eager for a change and came to Steamboat to visit her brother. She soon found herself making the move out West. Working different jobs, she realized she missed the ice and was encouraged to teach skating. 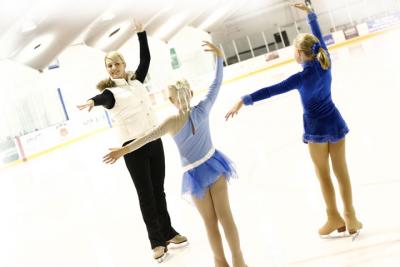 Courtney Gill demonstrates the fine points of ice skating to students Malia Fraioli, left, and Jenna Miller. Photo courtesy of Jackie Owen. “I love teaching kids hoto skate, watching them go from beginner to really good,” Courtney says. She accepted the director position when it was created in 2001, shortly after the arena was enclosed and renovated.    Courtney’s dad, a hockey coach, taught her hoto skate at age four. She lived near the Colonial Figure Skating Club where her career in synchronized skating began. After Colonial, she skated with the Haydenettes Synchro Team for six years traveling the U.S., Canada and Europe, winning five national championships along the way.   “It changed my life dramatically,” she says. “Our coach was amazing and did a lot to help develop the sport.”     Courtney liked it so much she started the synchronized skating program in Steamboat. “It’s the fastest growing phase of figure skating. I like it better because it’s a team sport,” she says. Her synchro group, Team Volant, made it to nationals in its third year. “It was a great experience for them and they got to travel around the country,” she says.    As fun as it is, there are occasional glitches. During one performance, a skater dropped an arm too late, hitting another skater and causing her to pass out. “In synchronized skating, it’s about trusting your teammates. Everyone has to be perfectly timed,” she says.    The skating club also does local shows, with a major presentation every December. Courtney says she enjoys coming up with a theme and putting the shows together. “I believe in telling a story when you skate.”   “It’s been a fun journey,” Courtney says. “The girls see me as a role model, but they’ve taught me so much as well. I never thought it would bring this much joy to my life. I always said I would never teach skating and never move to Colorado.” You knowhat they say: never say never.Mike DuBord -The man in brown     Maneuvering a large brown truck down Lincoln Avenue through heavy traffic, alleys, icy roads and steep driveways are just a feof the challenges Mike DuBord faces as a UPS driver. 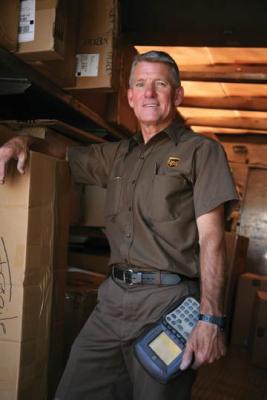 UPS driver Mike DuBord is a familiar face in Old Town. Photo courtesy of Corey Kopischke.   The dogs are another story. “I’ve never not been able to befriend a dog,” Mike says. The biscuits he keeps in his pocket win most dogs over.    Steamboat Springs’ friendly deliveryman moved here with his wife, Wendy, and three other couples to ski for a winter. That was 30 years ago. Mike worked a variety of jobs before going to UPS, where he’s been for 17 years.    Though he admits every day is a challenge, Mike says it’s a great job. “I love that I don’t have to be in an office all day. I get to work outside,” he says. He also likes all the different people he gets to meet and talk to every day. “You knothings people don’t realize you know,” he says – like where people work, or when they move.   And sometimes he sees things he shouldn’t. “Sometimes people open the door wrapped in a towel,” he says.    Making 150-160 stops a day and delivering up to 300 packages, Mike doesn’t have to find time for the gym. “I move around a lot. It keeps me in shape,” he says. There have been times when he wasn’t able to deliver a package because of a threatening dog and he’s even been bitten several times, but the deliveries always get through – eventually.    When he’s not dressed in brown, Mike likes to turn to other outdoor activities. “I do a lot of hunting, fishing and archery. My father got us involved with archery when we were really young. I use a long boand make my own arrows,” he explains. He has also taken up golf, “but I’m about to give that up,” he laughs.    Mike also loves spending time with his family. Wendy works for the city and their daughter, Nicole, just graduated from high school. “If the next 17 years go by as fast, I’m in trouble,” he says. Scott Hetrick -Firefighter EMT     Briefings, exercise, quick checks, training, fire inspections, public education and data entry – it’s all in a day’s work for Scott Hetrick, a firefighter EMT with Steamboat Springs Fire Rescue. Did we mention responding to 911 calls and other emergencies? 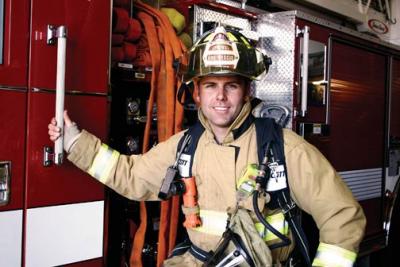 Firefighter EMT Scott Hetrick Suits up at the Steamboat Springs firehouse. Photo courtesy of Thomas Seybold.   In 2001, the Steamboat Springs Fire Department and the ambulance service merged to become Steamboat Springs Fire Rescue. As a result, everyone was cross-trained to do both jobs.   “People don’t realize everything we do,” Scott says. “You have to be ready to react quickly to any situation. You have to stay in shape. The gear and packs, which we carry on fire-related calls, weigh around 50 pounds.”   To stay in shape, on-duty firefighters are required to do a one-hour workout every day. That means hauling the trucks and equipment to the gym in case they get called out on an emergency.      Scott got the itch for firefighting when he was an EMT for an ambulance service in Los Angeles County, California. “Getting to knothe firefighters on those calls is what prompted me to become a firefighter,” he says.    He moved to Steamboat in 1994 and joined the Reserve Program for Rookies in 1996, becoming a volunteer firefighter in 1997.   “My first fire was the Waterford Townhomes,” he recalls of the situation that earned him and his fellofirefighters a commendation from the city for their efforts.   A full-time paid firefighter EMT since 2003, Scott is not afraid to run into a burning building. It’s driving the truck that can be a little scary at times. “Driving in winter conditions can be challenging,” he says. Maneuvering through traffic and around vehicles that don’t pull over to the right when a fire truck approaches add valuable minutes to an emergency response.  In his “off duty time” Scott runs his own business, Eclipse WindoTinting, and spends time with his family. He lights up when asked about his six-year-old daughter who he says is “the love of my life.”   Scott also takes pride in being a firefighter. “I love the pride and unity of being part of an excellent trained group of top-notch people and helping the community in their time of need.”Laura Sturges-Be cause   Many people move to Steamboat Springs and take on multiple jobs. Laura Sturges tried a different approach – she took on multiple causes. “I love helping people. I can’t (afford to) write a check for $1,000, but I can get 1,000 people in a room,” Laura says about her flair for fundraising. ##Image4-left-Laura Sturges. Photo courtesy of Gretchen Patterson.##  Since moving to Steamboat in 2002 after graduating from the University of Indiana, Laura has become involved with a diverse cross-section of local, national and international nonprofits.   “You have to be passionate about it. The concept has to totally floor you,” Laura says. “I’ve been very blessed in the land of philanthropy because I’ve been able to see the fruits of my labor.”   Nothe director of marketing for Prudential Steamboat Realty, Laura’s local labor has benefited Routt County Habitat for Humanity’s Carpenter’s Ball; Hazie Werner Hospitality Foundation; Come Let’s Dance, helping African AIDS orphans and their communities become self-sufficient; Sunshine Kids, providing vacations for cancer-stricken children; Relay for Life, an event that raises money to fight cancer; and Impact 100, a collective form of charitable giving through the Yampa Valley Community Foundation.     A Kentucky native, Laura’s road to Steamboat seems pre-ordained. “I was a loud, obnoxious 3-year-old and wanted to be a cowgirl. My mom called up her college roommate (longtime Steamboat resident and cowgirl) Barb Shipley and said, ‘I don’t knohow, but I had your kid.’”        Laura says she learned from her parents and grandparents about giving and helping others. “It’s the little things you do that don’t cost a fortune, but make someone’s day better. When people see that, they can feel the benefit.     ”What does she say to someone who doesn’t knohoto get involved? “Call me, I’ll place you.”
Article Gallery [3 Images] Click Any Image To Expand