Necessity inspires creativity. Creativity fosters alternatives.Alternatives present solutions.  These nine words are more than enough to develop a world where a seemingly insatiable thirst for energy is quenched. A world where energy decisions are not made by rich over poor, by countries that have plenty over those that have little, or even by choosing between saving pristine wilderness environments over allowing high impact searches for known finite resources � a world that runs on clean, renewable, efficient fuel.  It may not be an unobtainable utopia when you consider viable alternative and renewable energy choices being promoted, developed and used right now, locally, in Routt County. 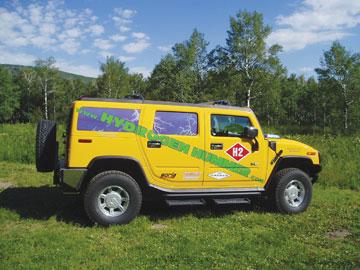 Fred and Tai Robinson's hydrogen-powered Hummer can also run on natural gas, ethanol or regular unleaded gasoline. Photo courtesy of Fred Robinson.  Two locals actively promoting alternative fuels are Fred and Tai Robinson. This father-son duo comprise Intergalactic Hydrogen, a company specializing in upgrading fuel systems for vehicles into multi-fuel engines that run on biodiesel, hydrogen, compressed natural gas, propane, or ethanol while still retaining the ability to use gasoline or diesel.Fred, a car mechanic in the valley, began working with hydrogen in 1975 when he converted a client's car to run on hydrogen. "I picked up a lot of knowledge on that project just on my own. I just figured out hoto do it and did it," Fred says.  His current project is converting a Hummer, normally known for its gas-guzzling capacity, to run on hydrogen and compressed natural gas or ethanol while keeping the option to run the engine on unleaded fuel. Fred test-drove the Hummer to California, making it there and back on less than a tank of gasoline, relying instead on CNG and hydrogen.  "This vehicle could have a 1,000-mile range running on CNG. And the emissions are 70% to 80% lower than gasoline. With hydrogen, there are no emissions whatsoever. In fact, the air coming out of the tailpipe is cleaner than the air going into the engine," Fred says.  Intergalactic Hydrogen is interested in working with the Roaring Fork Transportation Authority in Aspen to build several hydrogen cars. "They have expressed interest in a hydrogen production facility that would make renewable hydrogen from hydroelectric power and water. They've also looked into running hydrogen buses," Fred says.  Perhaps one of the most well-known and longest running local uses of alternative energy is radio station KFMU. Originally built as a wind-powered station in 1975, KFMU lost its capacity to run on wind power when the props and tail bleoff during the extreme wind event that caused the 1997 BloDown.  Even with abundant, cheap energy available to power their station, the original owner sawind power as a viable alternative. To be sure, KFMU's wind generating capacity was limited by early technology and lean maintenance budgets and can't compare to today's wind power farms and turbines. Nonetheless, KFMU is a pioneer.  In 1991, the station added solar power to its list of alternatives. Currently, KFMU's broadcast unit is 100% solar-powered with a propane generator as backup.  "We have had our share of challenges but we feel that operating with wind and solar power over the years has been very important to us and the community. Plus, its always fun to announce over the airwaves, �solar-powered KFMU,'" station manager Brian Harvey says.  Susan Holland is a strong local advocate of solar energy. One of her jobs is with the Department of Energy's Million Solar Roofs Initiative announced in 1997. The goal is to install one million solar energy roofs throughout the nation by 2010.  Susan finds local businesses, government staff, utility staff, builders and citizens who want more information on solar energy. She has expertise in both photovoltaic (solar electric systems) and solar thermal (heating and hot water) systems and helped with the installations of 120 solar systems in Boulder County before moving to Steamboat Springs. She can provide sizing numbers, expected costs and energy estimates for a particular solar design.  Emerald Mountain Energy, Susan's business with Tim McCarthy, designs and installs renewable energy systems. One of their first projects involves the Steamboat Springs Middle School.  A lawsuit involving the Hayden Power Plant in the early �90s required a portion of the settlement money to be used locally. As a result, one school in each of four northwest Colorado counties � Routt, Jackson, Rio Blanco and Moffat � will receive a PV solar system. Along with solar panels, the schools implement an educational program involving math and science as it relates to solar power, enabling students and the public to become familiar with the concept. 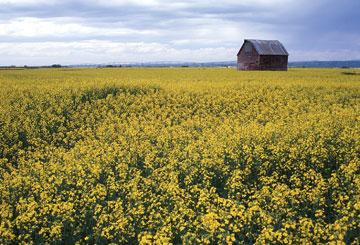 Rapeseed is a species of mustard used to produce canola oil, one resource in the production of biofuels. Photo courtesy of Jim Steinberg/Portfolio Publications.  "Some of the most exciting news is that the recently passed federal energy bill includes tax credits for homeowners who install solar electric, solar thermal, ground source heat pumps, wind turbines, or increase the energy efficiency of their homes with better windows and appliances," Susan says.  Wind energy is also becoming increasingly available. Yampa Valley Electric Association has offered its customers the option of buying wind blocks (one wind block = 100 kilowatt hours) to support this renewable energy since 1999.  Jim Chappel, YVEA spokesman, says this program came into existence largely from public input and support. "YVEA is a not-for-profit cooperative. Our goal is to provide our customers with the least expensive energy we can. If our customers shosupport for renewables, even if it isn't the least expensive, we will get it."  YVEA purchases its wind power from the Ponnequinn Wind Facility in Weld County near the Colorado-Wyoming border. Jim says purchasing wind blocks costs the average household an additional $3 per block per month. The program is a great choice for people who can't install or afford a renewable system but who support this "green" energy.  Can you be sure the wind power you are purchasing is powering your home? No. But purchasing wind blocks shows support for wind power and displaces energy produced by a coal- or gas-fired power plant. The Community Office of Resource Efficiency estimates that buying two wind blocks each month eliminates 6,000 pounds of air pollution a year. That's like planting an acre of trees or not driving your car 6,000 miles, YVEA estimates.  The Steamboat Ski & Resort Corp. has initiated a green energy program. The company purchases energy certificates to offset 3% of its total energy requirements, including 100% of the power required to run the neBurgess Creek lift.  Steamboat's wind power is produced by Foote Creek Rim Wind Farm in Wyoming. Ski area officials say the commitment has an environmental impact equivalent to planting 74 acres of trees and eliminating 74 cars from the road for one year, while preventing the release of 546,480 pounds of carbon dioxide annually. The benefits from the BC chairlift provide the equivalent of planting more than 14,000 trees in a year and will keep 832 pounds of sulfur dioxide, 432 pounds of nitrogen oxide and 220,960 pounds of carbon dioxide out of the atmosphere.  In the continuous quest for cleaner air, biodiesel fuel is becoming a popular alternative to unleaded gasoline. Biodiesel is produced from domestic, renewable resources such as soybeans or even waste vegetable oil.  According to the U.S. Department of Energy, the benefits of biodiesel include lower, less toxic emissions which burn cleaner and increase the life of a diesel engine. And since it uses renewable resources grown in the U.S., it decreases dependence on foreign oil and contributes to local economies.Craig resident Chris Craft commutes 100 miles a day to Steamboat. He researched the possibility of making his own biodiesel fuel at home after hearing a National Public Radio report on the "Veggie Van" about a man who converted a bus to run on waste vegetable oil from restaurants.While that type of alternative fuel requires engine modification, Chris's recipe for biodiesel lets him use a standard diesel engine. He blends vegetable oil acquired from local restaurants with lye and methanol because he says blends start easier in cold weather than vegetable-only biodeisel. It costs him approximately $1 per gallon. Chris says there are lots of biodiesel "recipes" on the web but many are suspect in their efficiency.  Terry Weston, owner of Weston Oil, a Steamboat retail and wholesale fuel supplier, calls himself an "avid fan of alternative fuel." His company began selling B20 (20% biodiesel and 80% petroleum) supplied by Fort Collins-based Blue Sun Biodiesel, in 2005."We've been in business 28 years and see we have to do something to curtail our use of foreign oil, especially when you consider our kids' and grandkids' futures," Terry says. Terry hopes to work with fleet vehicles such as Steamboat's school buses, the city parks and recreation vehicles and possibly the ski corp.  Another Steamboat connection to the growing biofuels industry is BioFuel Energy, a division of BioFuel Solutions. Dan Simon, who helped create BioFuel Energy, is excited about renewable energy's potential. 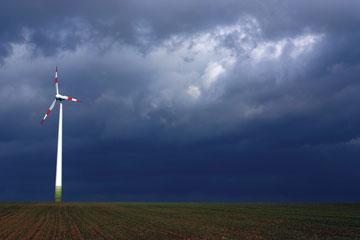 Photo courtesy of Jupiter images.   "In 2006, about five billion gallons of biofuel will be produced in the United States. In the next five years, production could reach 10 billion gallons," Dan says.  Dan says BioFuel Energy plans to be one of the largest producers of ethanol in the country. The company has raised more than $350 million mainly for construction of two nebiofuel production plants � one in Wood River, Neb., and another in Fairmont, Minn.  The facilities will be built by another Steamboat-based company, TIC, one of the leading industrial construction contractors serving the power industry. It is consistently ranked as one of the top 10-20 companies in the world in this field with expertise building sites for power, oil/gas/chemical, renewable energy, mining/minerals, water and water treatment, marine and other facilities.  Early in his career, Dan lived in Asia and safirsthand the results of environmental mistreatment and neglect. Because of that, he says he is motivated by the preservation of quality of life. "This is where my passion for renewable energy developed and also heightened my appreciation of our own environment."  In Colorado, Amendment 37 can be seen as a barometer for public interest in alternative energy. Passed by a majority of voters in 2004, it establishes a 10% renewable energy requirement for Colorado's largest utilities by 2015. A majority of Coloradans has said they are tired of the energy status quo and it is time to think beyond today and, with a little knowledge, look further ahead than tomorrow. Murray Selleck is a local freelance writer and an advocate of alternative energy.
Article Gallery [3 Images] Click Any Image To Expand