Joe Roberts-A life transformed   When Joe Roberts first came to Lowell Whiteman School from San Diego in 1968, he had a lot to learn � but not as a student.  Joe soon found himself teaching more than math and biology at the private college preparatory boarding school in Strawberry Park just outside Steamboat Springs. He became a ski guide, taking the teens to Mount Werner or out the school's back door into national forest. The kids took advantage of the neguy, getting Joe to drive them to Aspen on a ski trip even though he didn't have ski equipment. And Joe's wife, Pat, ran the girls' dorm. 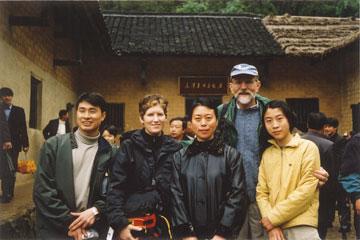 Joe Roberts and Whiteman faculty member Deirdre Pepin with Chinese headmasters at Chairman Mao Tse-Tung's ancestral home. Photo courtesy of Joe Roberts.  "I got quite an education living in the girls' dorm. I had six brothers and no sisters. I was unprepared and had no idea about teenage girls," Joe recalls. "My wife and I were just kids when we arrived at Whiteman. We came to Steamboat looking for a little adventure and got far more than we could have imagined."  Over the past 38 years, Joe has gone with the students to China, Morocco, Spain, Turkey, Egypt, Costa Rica, Vietnam, India and other countries. "We used to take books and study. Nowe just travel," Joe says of the school's signature four-week travel programs. "You have shared experiences. Through ups and downs, you become a family. It changes the kids' relationship with you. When you walk into the classroom, they aren't looking at you as someone who gives homework. You're a human being, not just a teacher."  Even though Joe speaks some Spanish, a little French and a tiny bit of Chinese and Turkish, many of the foreign trips provided more than a little excitement.  "Marrakech was a tremendous eye-opener. The big square, Djemmaa el Fna, is an ongoing, living circus and was completely unfamiliar to the kids and me," Joe says.  Villagers in Vietnam were so fascinated by the strangers that crowds of 40-50 gathered to watch the students eat.  Traveling through Ecuador became a challenge during a peasant uprising. "The villagers surrounded us, pretending to be serious. They were yanking our chain and giving us a hard time. Finally they laughed and said to go on. Later the kids laughed and said, �Oh, Mr. Roberts, you should have seen your face. You were so scared.'"  In Turkey, what they thought was going to be a pick-up game of basketball practically turned into a national event. "The Turkish school's team was in full uniform while we were in swim trunks and sneakers. We arrived to a gym filled with 1,500 spectators expecting Americans to play basketball," Joe recalls. "They had guys 6-foot-10. Five of our students were willing to play. They killed us."  Joe says teaching small classes means having access to every kid every day, which makes teaching at Whiteman special. "I teach kids, I don't teach material. I want kids to interact, respond to me and engage. There's a lot of flux in their life. It's fun and scary at times. You have to talk to them as individuals, get them to participate in an intellectual process and shointerest," he says.  That style has rewarded Joe with some of his closest friends � his students. "The school part seems small compared to the life you share outside. You get to knothem as not kids anymore. They group, go to college. They may irritate you, don't do homework and get into trouble. But they will group. Don't lose the opportunity to knothem."  About his decision to teach at this unusual school, Joe says, "My life was transformed."Amy Larson-The sound of music   On November 11, 2005, voices rang out in the Soda Creek Elementary School auditorium as fifth-grade children sang songs of patriotism to honor Steamboat Springs' veterans. Hardly an eye was dry in a room packed with students, teachers, parents and more than 20 local veterans. Even the show's director, school music teacher Amy Larson, was moved to tears. 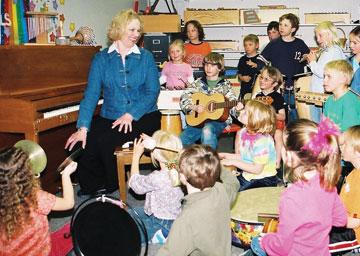 Amy Larson makes music with (clockwise from back) Amber Walker, Danny Kramer, Caleb Van Arsdale, Ryan Sabia, Charlie Tisch, AndreFirestone, Malia Faioli, Davis Petersen, Tess Richey, Sydney Lanham, Will Firestone, Keala Fraioli and Jenna Kramer. Photo courtesy of Ken Proper.  "The display of flags from different parts of the military and pictures of the kids' family members who were in the military was very moving," Amy says. "I had never done (a Veterans' Day program) before, but I had it in my mind for many years."   Amy's vision paid off in an unexpected way. The local VFW chapter nominated Amy for a state award that hadn't been presented to anyone in five years. In January, she was honored by Colorado's American Legion, receiving the 2005 Outstanding Teacher-Americanism Award.   "Producing shows is a fabulous experience for me," Amy says. "It's amazing hocreative kids are and homany good ideas they have." Kids write the script for the shows that have included a Disney-themed production and Colorado history programs.  Amy's daily music classes instill the musical spirit and capture the students' imaginations. "I love music � the way it makes you feel," she says. Her classroom is filled with music-making instruments � African djembe, bongos, congas, tambourines, xylophones, glockenspiel, shakers, scrapers, wood blocks, gong, chimes, recorders, guitars, keyboards and a piano.  "I play several instruments. I'd love to learn the mandolin � maybe when I'm 60. Right nomy favorite is the piano," Amy says. "I want to start experimenting and playing jazz piano. I'm listening to Diana Krall, so I'm really inspired."  But it's her students who truly inspire Amy. "There is an amazing base of children who've had a lot of exposure to music. It's a treat and a pleasure to be in a place like this."Jimmy Westlake-Star struck   During a 4,700-mile bicycle trip from Georgia to Alaska in the summer of 1993 with his cat, Charlotte, strapped in a pet-taxi, Jimmy Westlake had time to think. He was about to embark on a journey of the inner universe, a degree in psychology. But he discovered something unexpected. He missed the outer universe � the stars and planets.  "I learned a lot about myself. I was 40 years old, having a mid-life crisis and needed a change. I got a degree in psychology but I missed astronomy that I had taught for 15 years," Jimmy recalls. 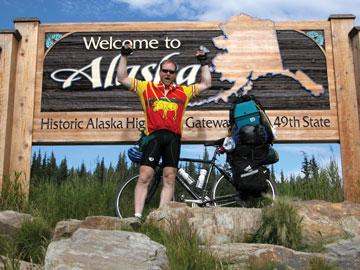 Jimmy Westlake makes it to Alaska from Georgia with his cat, Charlotte, on his bike. Photo courtesy of Jimmy Westlake.  He moved back to Georgia and his family, but soon found he also missed the mountains. When a position for an astronomy and physics professor opened at Colorado Mountain College's Alpine campus in Steamboat Springs in 1998, Jimmy made the move and his wife, Linda, followed six years later.  "I love exciting people about astronomy. Everyone has a built-in curiosity about standing on Mars, or zooming to another galaxy," Jimmy says. "I use mythology to bring the constellations to life. Orion the hunter has a whole story woven into the tapestry of the stars."  Jimmy's radio reports, "Cosmo Moments;" newspaper column, "The Celestial News;" and night sky viewings with a high-power telescope help people in the community to knowhat's going on in the sky.  Jimmy says many students have never seen the Milky Way before because they live in cities where the lights prevent viewing. "The biggest �wow' factor is viewing the planet Saturn. When a student first picks out a constellation on their own, it opens up a whole neuniverse for them. It reminds me of when I was a kid and couldn't find them in the sky even though I knethe (star) chart forward and backward. All of a sudden one night, the Little Dipper popped into vieand the rest of the constellations fell into place. When a student experiences that, it's a key moment," Jimmy says.  Driving Jimmy's own scientific curiosity is the prospect of nescientific discoveries and space travel. "We still have rovers on Mars sniffing around sending back pictures. Cassini is in orbit around Saturn. NeHorizons is going to Pluto. Scientists have discovered a tenth planet. And (the discovery of) dark energy means there's a fifth force in nature which will open up neareas," he says.  What about aliens? "I don't think we're alone in the universe, but I don't think we've been visited yet," Jimmy says. And will he go on a space shuttle? "Over my wife's strong objections."  Celestial events to look forward to this summer and fall include: In June, Mars and Saturn are going to meet close together in the sky next to Beehive cluster, a star cluster in the constellation Cancer and can be viewed with binoculars; August is the annual Perseid meteor sho(Aug. 12 peak with 60 meteors per hour); and November, Mercury will transit across the face of the sun, but a filtered telescope will be required.
Article Gallery [3 Images] Click Any Image To Expand