Blue Sky Pottery   Deb Babcock came to Steamboat Springs in 2000 in search of early retirement. What she found was a hobby she sculpted into a business. "I never had time for hobbies before retiring at 45. I had to find something to occupy my time," says the former marketing researcher from Ann Arbor, Mich.  Starting with pottery classes, Deb soon invested in a kiln and rented work space. "It's really very fun. I didn't knoanything about it, but I take classes, learn techniques and adapt my own way," she says. 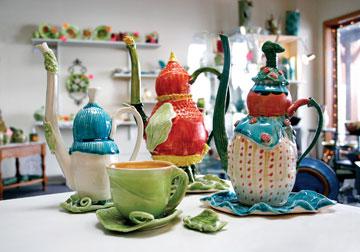 Deb Babcock creates whimsical, animated-looking teapots at her Blue Sky Pottery studio.Photo courtesy of Thomas Seybold.  Blue Sky Pottery, Deb's showroom and studio, displays her porcelain and stoneware. "It's all functional ware, things you can use in your home," Deb says of the elaborate teapots, platters and bowls.  All of Deb's pieces are handmade and one-of-a-kind. Sometimes she rolls imprints into the clay from cabbage, aspen and hosta leaves, a corrugated coffee holder or a zester. Other times, she carves designs or decorates the pottery using a high-fire majolica technique.  But her teapots are the most unusual. "They are a complicated form. I've always worked on them and kept going back," Deb says of the animated-looking pots. "I came up with the rolled top trying to make a rim. I made it fairly lightweight and it flopped down. Then I rippled it and folded it down."  "You can't make things perfect," Deb muses. "A friend said the Japanese have a philosophy that only God can make a perfect thing. I make lots of things that don't come out quite right, but someone always loves them. If it comes out really bad, I start over," she says.  If the long pottery-making process doesn't keep Deb busy enough, she can always fall back on her two other nehobbies. She is a master gardener with the Colorado State University Extension Office and a docent with the Steamboat Springs Arts Council. No retirement village and rocking chair for this lady who skis almost every winter day.  Blue Sky Pottery is located in Pine Grove Center. For showroom hours call 846-9349. Live from Steamboat, it's theater�   What do you get when you cross two talented performers with an empty movie theater? Live theater in Steamboat Springs.   Scott Parker and Kelly Anzalone, aka two-thirds of the juggling group "We're Not Clowns," had planned to create a theater as part of a downtown Steamboat development. But when their friend, who was spearheading the project, became ill and moved away, the plans were canceled. Scott and Kelly thought their dream was gone, too.   "It broke our hearts to lose a friend and to have our dream smashed. We didn't knowhat would happen with the theater scene," Scott says.   Suddenly, the space occupied by the Mountain Movie Theater became available. "I called Kelly and said, �Should we go for it?'" Scott says, noting a national trend of turning �50s movie houses into performing arts theaters. "We want to provide a venue for the community to use as a multi-use theater," Kelly adds.   Armed with the support of the Sheraton Steamboat Resort, which owns the property, a generous loan from their bank and much community support, the pair began renovating the space in Ski Time Square. The local theater company, Steamboat Community Players, nohas a home and a place to hang its lights. Steamboat sound man Kip Strean donated time and added his own equipment to the theater's already-installed surround sound.   "There was a community outpouring. We couldn't be as far as we are noif we weren't who we are living in this town," Kelly says. "Our banker said, �I would not be doing this if I didn't knowho you are.'"   Steamboat Mountain Theater opened in January to rousing applause. The 176-seat theater � which feels more like an intimate 50-seat nightclub � includes a stage with backdrops and a 20-foot projection screen. Local artwork, a 75-gallon coral reef aquarium and a plasma screen TV enhance the lobby so patrons can mill around and not miss any action when they go for refreshments.   Regular entertainment includes local country music act The Yampa Valley Boys and a Western melodrama. "We want to do a Steamboat-specific melodrama with Carl Howelsen and Brooklyn," Kelly says.   They also plan to shoski and recreation films, foreign and independent film series, Vaudevillian-style variety shows and an eclectic mix of other acts. They could have a showing of The Godfather and serve Italian food; they hosted 200 Pepsi executives from around the world, and movie moguls from Dreamworks rented the facility for a private screening of Over the Hedge. A girls' volleyball team presented its awards and watched season highlights on the big screen; and a family rented the space for a reunion.   The theater serves beer and wine along with soft drinks, popcorn, candy and specialty fare. Shows start early and admission is affordable to accommodate a family-friendly experience. "The shois done in 1 1/2 hours and you don't have to spend an arm and a leg," Scott says.   Steamboat Mountain Theater is in Ski Time Square behind Wired Café. For information, call 866-707-4648 or go to www.SteamboatTheater.com. Shifting the paradigm 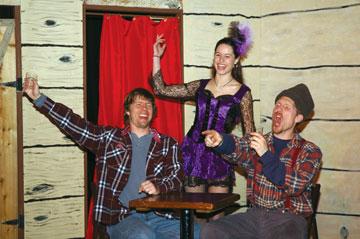 Todd Davidson, Katelyn Stokes and Michael David perform in the melodrama at the Steamboat Mountain Theater.Stepping through the doors, you could be in a small, off-Broadway theater, a San Francisco café, SoHo loft gallery or a Chicago blues bar. But you're not; you're in downtown Oak Creek � the quiet rural town 20 minutes south of Steamboat Springs.  Paradigm Theater owner and artistic director Barbi Bryant-Bonfiglio planned it that way. "I wanted to provide a space that s accessible to both artists and audience � an intimate place to gather," she says.   As a dancer, choreographer and director whose professional career has taken her from Colorado to the East Coast, Barbi is bringing to the theater a variety of local and national artists. The season will present a collection of visual and performing arts from spoken word performances to live music, dance, photography and musicals.   "I have an artist-friendly approach. I think it's possible to be sophisticated, to have quality and class without intimidation and create a comfortable atmosphere for every audience member," Barbi says.  The Paradigm opened last November with performance highlights from the coming season as a benefit for breast cancer research and awareness. "The response has been excellent, with the small theater full for almost every performance," says Alana Rothstein, a professional photographer who works with Barbi, her long-time friend.  The theater offers a selection of non-alcoholic beverages and goodies from the Mug Shot bakery. This adds to the Paradigm's ambience, and its chameleon-like quality makes people forget where they are. The magical transformation could be the theatrical spirit emanating from the battens holding the stage curtains, which are from Denver's historic Elitch's Theater.  "The Paradigm Theater was created by a performer and arts enthusiast for felloperformers and arts enthusiasts," Barbi says. "It's the gratitude that really makes it worth it. It's absolutely why the Paradigm exists." 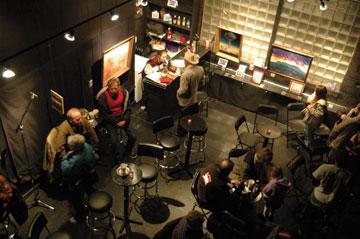 The Paradigm Theater in Oak Creek presents visual and performing arts.  This summer audiences can look forward to Friday and Saturday night performances of The Rocky Horror Picture Show, June 9-July 1, and A Midsummer Night's Dream in August. The Paradigm Theater is at 116 Main St., in the Oak Creek Plaza, 846-5137.Art for the Arts   Michelle Ideus, Nancy Jeffrey and Susan Jackson, three Steamboat Springs artists with distinct styles, share a common theme. They have taken up palette and brush to create original pieces that will be sold this summer to benefit the arts.  Regional artist Nancy Jeffrey created this year's Strings in the Mountains' artwork, an acrylic on panel entitled "The Soul of Music." 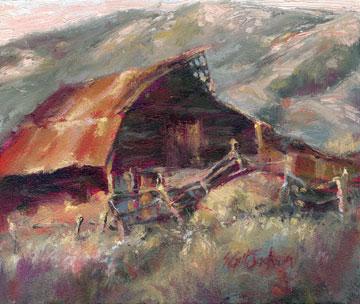 "The Wine Fest Barn," 9" x 12" oil on canvas, by Susan Jackson.  "My first thought was to incorporate a violin, because it expresses creativity as it relates to music," Nancy explains. She also chose a violin for her subject because of its symmetry, a common theme in her work. Another familiar element is the lizard, which represents the emerging creative soul. "My work often blends the structural with organic elements," Nancy explains. Her work can be seen online at www.studio2eleven.net.  For information about the summer music festival, www.stringsinthemountains.com.  Susan Jackson chose a traditional Western subject for her work: a classic Steamboat barn. Specializing in impressionist landscapes with a free and open "plein air" feel, Susan's 9" x 12" oil will be auctioned at the Wine on the Mountain kickoff celebration for the 2006 Steamboat Wine Fest, Thursday, Aug. 3, at the top of the gondola. Proceeds benefit the Steamboat Springs Arts Council.   Susan displays her work online at www.susangilljackson.com. For information, call 970-221-5007.   The complex personality of history's most infamous lover, Don Giovanni, is evident in the painting created by Michelle Ideus to benefit Emerald City Opera. "The Criminal Don," a mixed-media piece, depicts the central character of Mozart's most famous opera. "I painted him with his flirty, day clothes on, in slight profile. His long ponytail is carrying the weight of his conquests and utter betrayal. His hat contains the image of his servant fingering through Giovanni's book of lovers," Michelle says. Michelle's portfolio is online at www.art-ideus.com.  "The Criminal Don" will be auctioned during Letters for Mozart: Life and Love through His Operas, Aug. 4 and 6, at Steamboat Springs High School. Limited edition fine-art prints, $99 plus shipping and handling, are also available.   For information, call 970-879-1996.
Article Gallery [4 Images] Click Any Image To Expand