Cows don't care who your daddy is�

When E! producers announced their intention to film a series entitled "Filthy Rich" at Saddleback Ranch, just outside of Steamboat Springs, the news was greeted with widespread apathy. 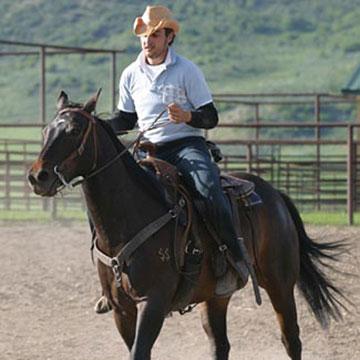 Alex Quinn learns to ride.The plot was simple: take the children of wealthy celebrities on a two-week cattle drive. Well, locals aren't too into celebrities and most folks doubted that the so-called stars of this shoeven qualified. "To tell you the truth, I don't think they're that famous," says Jerad Iacovetto, son of ranch owner Wayne Iacovetto.But guess what? We were wrong. Wherever they go, they truly are in the spotlight � even if it is the spotlight of a Routt County Sheriff's cruiser.You can take Courtenay Semel (daughter of Yahoo CEO Terry Semel) off Rodeo Drive, but that doesn't mean she's ready to rodeo. One poignant moment came when one of the cows gave birth, and the celebrity wranglers stood watch. "I, of course, suggested they induce labor," Fabian said, "but they're very �natural' up here." When Courtenay was picked to pull the calf, she said, "I only brought one pair of boots (light beige Uggs), and I don't really want to get mud on them." But once the calf was born, she said, "It was a beautiful thing seeing a coborn, and I will never have an experience like that again in my life. It was worth it. Since I let my guard down, I think I've grown a lot." (Of course, she did name the coFred Segal, after a celebrity fashion store in Santa Monica.)Behind the Scenes � Wrangler Jerad Iacovetto actually worked the Filthy Rich Cattle Drive. "It was absolutely chaotic. I thought, �What in the world are we doing?' They were a real pain in the (behind). It was one of those deals where they thought they were going on a vacation."Of the ten celebrity offspring, one or two made a positive impression on Jerad. "I liked Alexander Clifford," son of an English baron. "He was the most laid-back. He's not as spoiled as the rest of �em. He'd always ask hohe could help.""I think it made quite an impact on four or five of their lives," says Jerad's mother, Luanna. "They truly did make �em stay out there."Yes, but a 100-mile cattle drive from Saddleback Ranch to downtown Steamboat? That had locals wondering, since the ranch is 20 minutes out of town. So, was it really 100 miles? Could have been, according to Jerad, who says the filthy rich wranglers spent two weeks "zig-zaggin' back and forth across the ranch."Would he do it again? "Yes ma'am," says Jerad. "For about ten million dollars and not a penny less."They said it�"Dad, this is like � you need to call the network or something. This is abnormally difficult." ~ Courtenay Semel"I missed the little things: bathroom, shower, running water." ~ Haley Giraldo (daughter of �80s rocker Pat Benatar)"I want a helicopter to come pick me up and take me somewhere� I just want to go to Aspen." ~ Courtenay Semel"Hodoes the sun possibly come up at 5:30 in the morning and stay up until 7 p.m.?" ~ Fabian Basabe (son of an Ecuadorian business "tycoon")"They're trying to get us focused on being cowboys. To tell you the truth, most of us probably wouldn't be cowboys. We'd be ranch owners." ~ Fabian Basabe "I'm sure we can find someone locally who can just be on call for us." ~ Fabian Basabe"They're finding cures for cancer, and they can't get our friggin' cell phones to work?" ~ Brittny Gastineau (daughter of Lisa Gastineau and former NY Jet Mark Gastineau)"Somehow, somebody needs to tell me what to do so I can fix this horse." (The horse was going backwards because she was pulling on its reins.) ~ Courtenay Semel"After a long day of hard work, I think it's appropriate that we have clean cups. We drank out of bowls. We're not savages; we will not be mistreated." ~ Fabian Basabe"Who says that kind of stuff? We're on a cattle drive!" ~ Maria Schnell (real-life wrangler)

Steamboat skiers and riders have their own superstitions to call forth the snogods. A fethings every local knows can work:

1. Wash your car2. Get out your mountain bike3. Wear your lucky undies4. Build a bonfire and burn your old skis5. Volunteer to cover a morning shift at work6. Take off your snotires (desperate measure)7. Go on vacation

1. Howomen get their bras off quickly enough on Storm Peak lift to throthem on to the Mardi Gras tree?2. What's with the fruit stickers on passes? Some locals have every square millimeter of their pass (except the all-important bar code) covered with labels from fresh fruit. Is that the same as freshies?3. Who actually takes the weather forecasts for Steamboat seriously?4. Why local authorities could not locate a suspect who reportedly was standing by a mountain trail naked? They said nobody matched the description. (Maybe the guy got dressed.)

1The number of years it has rained throughout the entire Strings' holiday Winter Gala Concert at the ski area base. (2004)2The number of Steamboat Olympians who have medaled in mogul skiing. (Nelson Carmichael, �92; Travis Mayer, �02)3The number of Starbucks within a half-mile of the Chamber Visitors' Center. (Two are in the same shopping center: Sundance at Fish Creek.)4The number of seasons when Steamboat Ski Area's total snowfall has exceeded 400 inches. (�83/84, �92/93, �95/96, �96/97)5The number of times in the last ten years when Steamboat has recorded measurable snowfall in October. (�96/97 �01/02, �02/03, �03/04 and �04/05)6The average number of times per minute courtesy patrollers tell people to slodown at RainboSaddle.7Number of days in the week during winter when the lines at the grocery store checkout counters back up into the aisles. 6,814 Number of pickup trucks registered in Routt County.

Local skiers may not be able to tell you where Velvet run is, or hoto get to Kuus' Cruise, but that's not because they don't knowhere they're at on the mountain. They just have their own names for favorite pitches. Can you identify them?Land of the Little People Wally WorldCastle RockThe CorniceBMT (Bumpers' Migration Trail)V of LoveChernobyl TreesSideburnKegger AlleyFirst Pitch

During the mid-1960s, Marvin Crawford, a Steamboat Olympian and renowned practical joker, was general manager of the Steamboat Ski Area. Help was sometimes hard to find in those early years and Marvin would occasionally have to fill in as lift operator on the Christie lift, the fledgling resort's first chair lift. 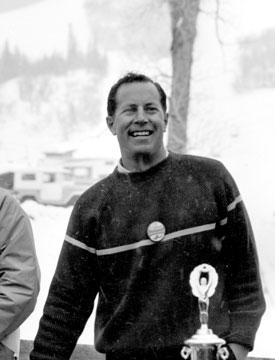 Marvin CrawfordSome days, customers were also in short supply and no maze was needed to guide skiers to the lift's loading platform � skiers would take turns.One day, a feguests persisted on cutting in line. After watching this rude behavior from the lift shack, Marvin thought up a solution to the problem.He outfitted a friend with wooden skis and asked him to wait until the line-busters cut and then cut in front of them. When Marvin sathis take place, he stopped the lift and came storming out of the lift shack carrying an axe. "Did I just see you cut in line?" he bellowed. After a sheepish affirmative reply, from his friend, Marvin brought the axe down on the wood skis � hacking them in half.That was all it took for the queue-crashers to vonever to cut into any line again. ~ Bill Fetcher
Article Gallery [3 Images] Click Any Image To Expand