Winter Skills    Full-on winter in Yellowstone � trees twist and bend in a slow-motion protest against an arctic cold front slamming us. Snois falling, rising and spinning. The wind adds its wailing voice. A strange moaning sound builds from the Red Mountains above us as the weather gathers momentum to slam into our camp. 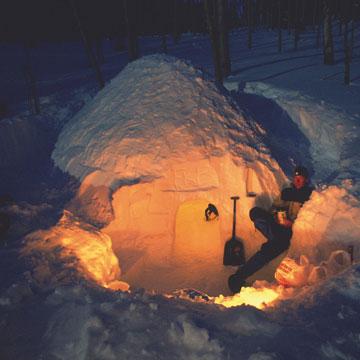 Kevin Kopischke sits by a snocave. Photo courtesy of Corey Kopischke.  I barely hear one of my partners shout, "I've had enough!" and watch him duck into a hole in the snow. I follohim through a shoulder-wide tunnel that leads into the snocave we dug before the storm hit.    The tunnel is a fefeet long and just wide enough for one person to crawl through on elbows and knees. It angles sharply upward into a domed room big enough for four. Candlelight reflects off the glazed snolighting the room. The temperature inside is easily above freezing and all is eerily quiet. The blizzard outside cannot be heard or felt. We are warm, comfortable and soon asleep.   The desire to explore the winter backcountry is easy to understand. But the skills to travel and be comfortable in a winter environment are not best learned by trial and error.    Students in John Saunders' SnoOrientation class at Colorado Mountain College learn natural shelter construction, site selection, orienteering and survival first aid.    "A large part of winter skills is just being prepared. A pack of matches, a survival blanket and a febasics can go a longer way in keeping you alive than a GPS unit or cell phone," John says.    Even simple trips into the backcountry should not be undertaken lightly. Plans to go on a "little tour" on Rabbit Ears Pass can quickly go awry with a twisted ankle, lovisibility or disorientation. Having the right equipment and the knowledge to construct an emergency trench shelter, snocave or a deluxe Quinzhee hut is essential.    "Two years ago, we had a course up on Sand Mountain near Steamboat Lake. The overnight temperature dropped to minus 37° or minus 40°. We constructed simple tarp pits for shelter and the temperatures inside were anywhere from around zero to about 25° above," John says.   The course is held once in February and again in March. It includes classroom and overnight field sessions. Full Moon Rising    Long after sunset on Rabbit Ears Pass, the free-falling temperature can be felt against our eyes and cheeks. We pause and let the quiet fall around us. The methodical crunch of snounder our snowshoes stops and it suddenly seems incredibly cold. 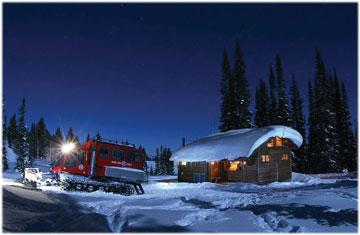 A snocat takes night skiers up on Buffalo Pass. Photo courtesy of Blue Sky West.   A growing milky white light fills the eastern sky. Moon shadows race towards us from behind, as the rising crest of a full moon taps the horizon. Along the ridge tall pines, which only moments ago formed a dull black line, are backlit and lined with detail. The moon is massive and our cold little spot in this big winter backcountry feels as if it's the center of the universe.    The moonlight shining on the snolets us see every dip and rise in the terrain � a soft creek bed there, a safe place to cross here, an easy way through the next stand of trees up there.    Some say the moon appears larger on the horizon due to moisture in the air and its magnifying effect. Others pose the notion that our mind plays a trick on our eyes. My hypothesis: the moon rises large and impressive because we're here to witness it. Will the moon rise as brilliantly if no one is there to appreciate it?    Ken Schomaker, who offers full-moon snowshoe tours at Rocky Mountain Ventures, says several nights before and after the full moon provide more than enough light to experience these special winter nights. "Even on nights when there's cloud cover it's really fun and a little on the eerie side, too," he laughs.    Add a bit of downhill speed to your full moon adventure with Blue Sky West's full moon powder skiing on Buffalo Pass. Then folloup with hot dinner served in their backcountry hut.   As each full moon rises this winter, so will the opportunity to experience a very special side to the season. My advice: don't go to bed early. Colorado Powder: NASA's nefrontier Ah, roger Houston, it appears Steamboat has powder again!"    The National Aeronautics and Space Administration, other federal agencies, universities and a host of volunteers have been gathering snowpack measurements for the past two years to improve forecasts for water supply, snowmelt floods and drought. Teams on the ground and in the air, plus satellites, collect the data for the Cold Land Processes Experiment. 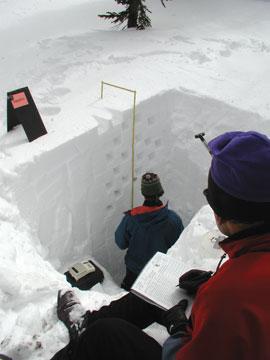 Volunteers take snomeasurements for the Cold Land Processes Experiment. Photo courtesy of NASA.   Kelly Elder, a Fort Collins-based research hydrologist for the forest service, says the traditional mode of data collection from ground teams is very good, particularly for average years.    "It's one of the true government hydrological success stories. But the data works poorly on above-average or below-average years," Kelly says. More accurate forecasts during years that produce flood or drought will alloimprovement in economic, social and environmental planning, he says.    To create better forecasts, measurements need to be taken more often and in more places. The use of air and space-based sensors play an increasing role because they can accurately take measurements frequently and from remote areas.    Not all snois the same. One area may have deep dry powder, another may have numerous ice- or wind-packed layers, and another may have a super-condensed wet snowpack. Hothe sensors interpret what they are "seeing" needs to be confirmed on the ground, so simultaneous experiments in one area are done from the ground, air and space.    Colorado was chosen for the study because of its varied terrain, light to densely forested areas and rangeland. Buffalo Pass, Rabbit Ears Pass and parts of North Park are study areas. As the data is analyzed and computer models improve, airborne sensors and satellites will be able to acquire this data worldwide.    Soon, NASA will be able to confirm what we already kno� it's a powder day.    For information go to www.nohrsc.nws.gov/~cline/clp.htm
In-Print, Culture, Community, Shop+Eat+Drink, Sports, People, Living Photo Ate Skiing Snowshoe Colorado Mountain College Mountainside