Steve Dawes -Community character     Most people don't think of Steve Dawes as a character in this community, but the things he does help bring character to Steamboat Springs. 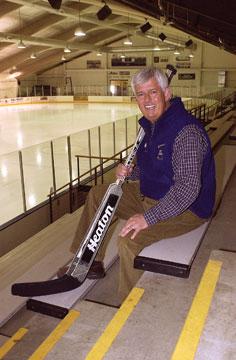 Steve Dawes has a rink-side seat at Steamboat's ice arena. Photo courtesy of Tyler Arroyo.    One of the founders of the property management company Steamboat Resorts, Steve is always on one committee or another, helping Steamboat's once-fledgling tourist industry. In 1982, when the local rodeo series was in dire financial straits, Steve opened his checkbook and offered his staff to help. He's been in the pits at the late-but-great Vintage Auto Races and worked with others to bring about the Haymaker Golf Course.    Steve also was among a group of locals who raised money to put a roof over the ice rink. "I remember standing on the ice shoveling snowith the other dads. When it was sunny, the ice got puddly. I looked up at Howelsen Hill and thought, �We can do better,'" he says.     Nopresident of the Health Care Foundation for the Yampa Valley, Steve moved out of the tourism business in the late �90s. But feeling a little out of touch with the community, he quickly stepped back in to help the hospital, where he's been on the board of directors for 16 years. "I was looking for something I felt passionate about," he says.     The foundation was developed to support the hospital's regional programs and services. "All nonprofits touch a lot of lives. The hospital can touch every life. That stimulates me to help. When you need (the hospital), you want to be sure it has the best staff, facilities, clinical to provide the best outcome."      Getting involved is "part of the character and fiber of the community," Steve says. "There's a feeling when you drive over (Rabbit Ears) pass, coupled with the belief that this is a unique, special community where you want to live and raise a family. At the end of the day, if you moved here for quality of life, it's still here." Megan Sisk-Connecting with pets      We cuddle, coddle, spoil and speak to our pets like our own children. We train them to do the right thing and scold them when they are bad. But do they really understand? Absolutely, says animal communicator Megan Sisk. 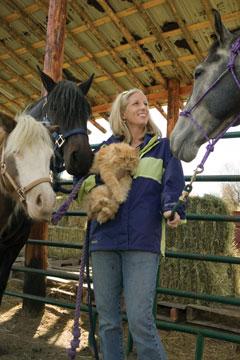 Megan Sisk cuddles with Pumpkin as Blitzen, Shasta and Cinco huddle. Photo courtesy of Ivars Mikelsons.     Megan was once called to assess why a couple's dog was barking all the time. "I kept calling the dog Little Baxter," she says even though that wasn't its name. She explained to the owners that Little Baxter wanted to be an "agility" dog like he'd seen on TV. "His name is Duncan," the owners kept reminding her. Megan stopped the session and said, "I'm sorry, your dog thinks his name is Little Baxter." The husband looked down and admitted sheepishly, every morning he opened the back door and yelled, "You little bastard, shut up!"      Even at 5, Megan could understand animals. Her cat was having kittens and something was wrong. "I have a distinct memory of saying to my mom, �Tiger had babies and one is stuck,'" she says. "I spent my entire childhood trying to get animals to sit on my lap. I caught an extraordinary amount of animals � mice, a magpie."      When she was almost 30, during a class with acclaimed animal communicator Joan Ranquet, she realized her ability to communicate with animals could be her vocation. "To me it was really eye-opening. I learned hoto really focus and say, �This is what I'm hearing.'"      As a massage therapist for horses, Megan turned her attention to listening to them. "I never pretend to be a vet or do anything medical. I have the animals describe what it feels like," she says and then describes the symptoms to local vets.      Sometimes she hears an animal's voice, other times an image comes to her. She can even mimic the voice of an animal. "I've had people say, �That's what I imagined my dog would sound like,'" she says.      "What is your job?" she asks. "Some animals are couch potatoes, but most animals are like most humans � they want to have a purpose," Megan says.      One dog became depressed after the birth of its owners' baby. Megan told the owner the dog wanted a red backpack to carry the baby's supplies. The owner went to a closet and pulled out a dog pack they hadn't used in years. Sure enough, it was red.     Blitzen is a pony that thinks he's a big horse. When people ride him he feels small, so he prefers to pull a cart. "He just struts when he's pulling," Megan says, explaining that Blitzen is happy to turn over the riding reins to a nehorse, Cinco. And Cinco hopes he doesn't disappoint his neowner.      She advises pet owners to reassure their pets. "Tell them you're coming back if you have to put them in a kennel," she says. "You have to educate people, confirm what they already know," she says. "Once people knoanimals hear and can feel, they start treating them differently." Matt Ladley-Amplitude and attitude      Matt Ladley drops into the halfpipe, hits a crippler 720 into a Haakon flip (switch crippler 720), lands and does a 900 into a backside 540 � and he's just warming up. At 14, Matt's not dizzy from all the flippin' tricks, but his competition sure is. 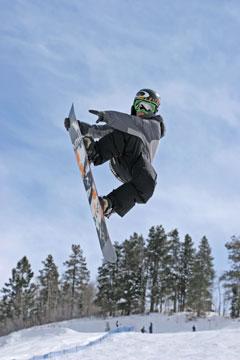 Matt Ladley getting amplitude. Photo courtesy Ellen Ladley.     A snowboarder in the Steamboat Springs Winter Sports Club, Matt blethe competition away with tricks like the one above performed at the Evolution Tour at Windells at Mount Hood. Matt took third place against riders of all ages. "I like the adrenaline. I think it's fun. The pressure gives me the reason to land something," Matt says.      "I think he enjoys landing his runs," says his Winter Sports Club coach, Spencer Tamblyn, who kneMatt had something special when he saMatt throa McTwist at 9 years old. The inverted backside 540 is one of the first tricks riders learn and the best riders perfect.      "Matt started asking me to snowboard when he was 4," says his mom, Ellen, who took Matt and his older sister Lauren skiing every week. At 7, she says, "He was the youngest kid in his snowboard group and he got it right away."      The family visited Steamboat for many years, finally moving here in 2001. Matt and Lauren, a gymnast, are students at the college preparatory Lowell Whiteman School. "The school gives a lot to make it work," Matt says. "It means a lot to be able to travel, go to competitions and still get a good education."      That flexibility has enabled Matt to go big on the competition circuit. He is the 2004 and �05 USASA National Halfpipe Champion, took first in the Rocky Mountain Snowboard Series open class, third in the �04 U.S. Open Junior Jam and third in the '05 Evolution Tour open class. For the past two years, Matt has been one of 15 on the Junior Gold Team, a farm team for the U.S. Snowboard Team.     For all his success, Matt says he doesn't take himself seriously and isn't hard on himself. "It seems like the thing that motivates him is fun," Spencer says. "Matt has gained a reputation for going out on a limb. People pay attention to him," Ellen adds.     Sponsors are paying attention, too, including Whiteman School, Salomon Sports, Bonfire clothing, Windells Camp, Burton RED helmets and Oakley eyewear. "Matt is so enthusiastic and positive. He's a great representative for our school," says Head of School Walt Daub.      Spencer just smiles knowingly and says, "He's quick and flippy."
In-Print, Culture, Community, Shop+Eat+Drink, Sports, People, Living oil Boat People Lowell Whiteman Photo Ate Skiing Snowboard Sport Animal