Cully Kistler-Capturing Steamboat      Scenes of Routt County � a red barn sits serenely in a quiet hay meadow. A bright blue '51 Ford pickup with WZ plates rests in a field. A border collie eagerly awaits its driver in an old red Jeep. And three curious goats look on inquisitively as if ready to jump through the picture frame. 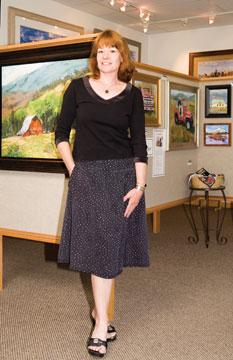 Cully Kistler at Sleeping Giant Gallery. Photo courtesy of Don Tudor.     Cully Kistler paints these familiar scenes, her colorful oils flowing easily over the canvas. "I always knewhat I wanted to do. I always painted. I never stopped," she says.      That confidence comes from doing something she truly enjoys, and her feeling for the outdoors and Steamboat are evident. "I love the feeling and smell of the paint. I just love color so much. I'd like people to say, �I look at your stuff and feel something,'" Cully says.     A Colorado native, Cully began painting at 8. She recently found her first painting � a horse head � among her mother's belongings. "I was so shocked. I greup on a farm and love horses," she says. She moved to Steamboat in 1974 and studied under noted plein air artists Jean Perry and George Strickland.     Cully's style is loose and light. "I stay away from being tight by holding the brush at the end, really loose. To make painting express movement I take dark lines and move them around," she explains.     While scenes of yelloschool houses and blue trucks are signatures of Cully's repertoire, she has also done portraits and was commissioned recently to paint a dinner party � in only two hours. The large format painting � reminiscent of Toulouse Lautrec � is compelling, with its faceless subjects, who seem to pop out from behind tables and flower centerpieces, engaged in conversation and celebration.      Cully's work is displayed at Sleeping Giant Gallery, 624 Lincoln Ave. Kathleen Allen-Loving the details      It's a fine race horse, but it gets ridden by a lot of different jockeys." That's hopiano tuner Kathleen Allen describes the Steinway grand piano at Strings in the Mountains. "I adjust to the artist," she says. 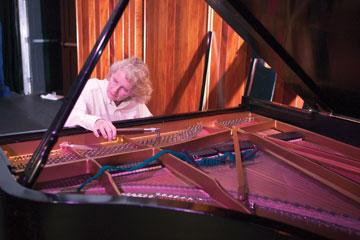 Kathleen Allen tunes Strings' grand piano. Photo courtesy of Ivars Mikelsons.    At age 5, Kathleen began picking out Sousa on piano, and then received her first lessons from her grandmother. She learned the art of tuning by taking a job as a tuner's bookkeeper in 1972. "My whole family is musical and mechanical. We all play something and fix something," she says.    Kathleen says tuning is like regulating an 88-cylinder valve adjustment. With 5,000 moving parts made of mostly organic materials, concert pianos require at least one adjustment and tuning per concert.     "To be a tuner takes infinite powers of concentration," Kathleen says. "Almost anyone who listens can hear what I'm hearing. I have to do it for 250 strings (each key Kathleen first came to Steamboat in 1995 after being "Shanghaied in the halls of MIT," where she had studied and was teaching the physics of music, by Strings musician David Deveau. Then she met Hayden rancher Butch Taylor and life turned upside down. "I was perfectly happy as a bachelor and noI'm deliriously happy," she beams.      When she isn't tinkering with strings, Kathleen falls back on the family tradition she has pursued since age 7 � Ukrainian egg painting. Intricate details are drawn on hen's eggs using melted bees wax and dipped in dye. Then they are waxed and dipped again and painted with toothpicks. Each egg takes 4-6 hours to complete. Kathleen only makes 16 a year and gives most as gifts. "I can't do it for money, only love."     It takes a certain amount of filtering of extraneous information inside the instrument. Close your ears to noise, open, focus on the vital part, the pure sustain of the note." She uses a set of specialty tools that resemble a dentist's kit. One time, a HeathroAirport security guard examining the tools decided Kathleen was a burglar. Brad Smith-The glass smith      Brad Smith holds a rod of glass in his hands, the tip smoldering at 2,000°. A torch melting the glass blasts a 4,000° flame. And Brad says it's a sissy job. 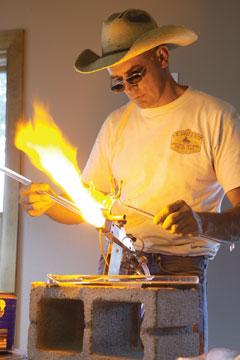 Brad Smith creates a glass elk. Photo courtesy of Ivars Mikelsons.     In minutes, the molten glass is transformed into a majestic elk, graceful hummingbird, elegant mermaid, sophisticated jewelry set with pendant, earrings and bracelet, or dozens of other wild animals, wine glasses, vases and glass sculptures.     "My favorite thing is making a whole line of running horses that have all kinds of different paint in them like the wild herds in northwest Colorado," says Brad, who has been doing lamp work glass blowing for 24 years.     As Brad rolls the clear glass rod in the flame, he pokes, prods and pulls the melted blob using other rods and gravity to create a piece. He mixes in crushed green glass, blends in more clear, adds a butterscotch color and soon the hind quarter of the elk appears.     Rarely taking his creation out of the flame, Brad uses pointy-nosed pliers to shape the legs, hooves and antlers. "You have to study the anatomy of the animal to figure it out," he says.      His largest glass sculpture was a 2-foot-long semitractor trailer. He also made a large meadowith birds, an American Indian with a spear, an African Serengeti tree with a sable and a chandelier with glass elk horns.      Brad teaches his freeform glass blowing techniques in small three-hour classes and attendees take home the pieces they make. "It's nice to come to a place like Steamboat and do something really different," he says.      For class times, call The Glass Smith, 871-4815.
Article Gallery [3 Images] Click Any Image To Expand